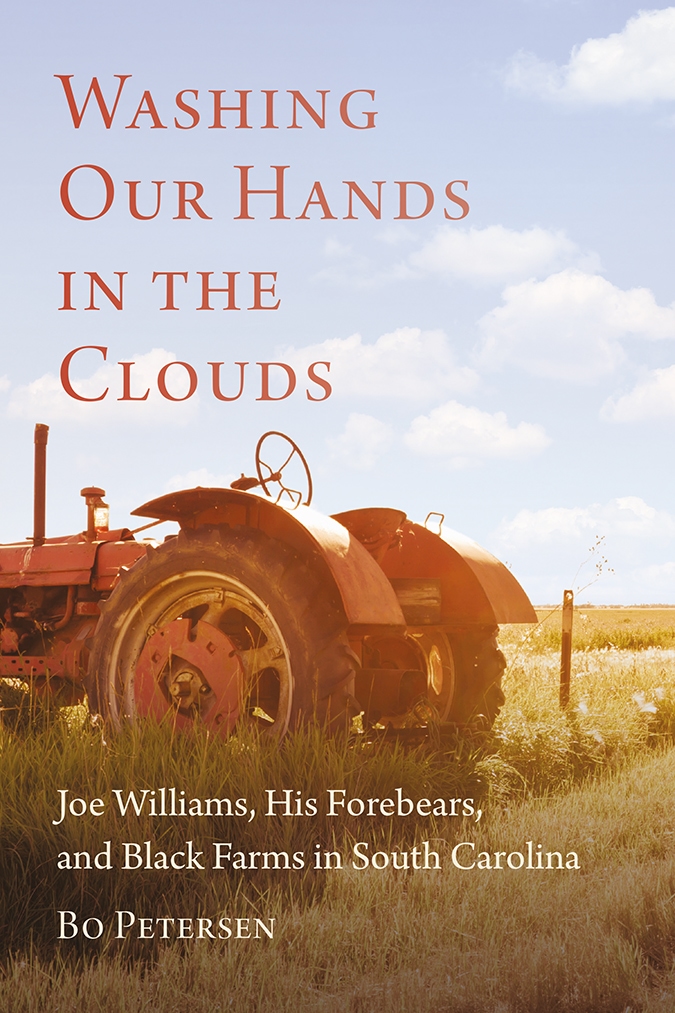 Washing Our Hands in the Clouds

Joe Williams, His Forebears, and Black Farms in South Carolina

In Washing Our Hands in the Clouds, Bo Petersen masterfully crafts a reflection on the Civil War, emancipation, Jim Crow, and the civil rights movement in the personal story of how it affected one man's life in a specific South Carolina locale. Petersen's accomplishment is that, in studying the Pee Dee region of Dillon and Marion Counties, he illuminates those issues throughout the Deep South. Through conversations with Joe Williams, his family, and acquaintances, white and black, Petersen merges the Williams family history back to Joe's great-great-grandfather, Scipio Williams, with the lives and fortunes of four generations of South Carolinians—black and white. Scipio, the family progenitor, was a man free in spirit and action before the Civil War destroyed chattel slavery. Scipio was a free black farmer who worked land that he owned in the Pee Dee before and after the war and during the worst days of Jim Crow white supremacy.

Petersen uses the Williams family genealogy, neighborhood, and, most important, their farmlands to understand Pee Dee and South Carolina history from the 1860s to the present. In his research he discovers historical currents that run deeper than events—currents of agriculture, land ownership, and allegiance to native soil—and transcend the march of time and carry the Williams family through slavery, war, Jim Crow, and economic dislocation to today's stories of Joe Williams. In gathering what Petersen describes as a collection of front porch stories, he also writes a history of what matters most to this family and this locale. The resulting narrative is surprising, unconventional, and true for all families in all places.

In Dillon County, tobacco production followed cotton farming. Old-time logging coexisted with textile factories. Jim Crow gave way to uncertain prospects of racial harmony. Those were monumental changes of circumstance, but they did not change human character. Washing Our Hands in the Clouds is a history of human character, of life that endures outside of the restraints of time. To understand this phenomenon is to realize that both Scipio and Joe and the generations between them wash their hands in the timeless clouds of South Carolina's sky.


Bo Petersen is an award-winning reporter at the Charleston Post & Courier newspaper. He has also published poetry, short stories, and nonfiction essays.

"During their first century of freedom, farming was the primary occupation of African Americans. Measures taken during the Civil War along with the 13th and 14th Amendments made the slaves African Americans. While providing background on a former slave who became a successful landowner, the reader is introduced to his great-great-grandson in a later period. At the age of 13, this remarkable African American boy left his tenant farming mother to become a tenant farmer for a white man. These were the years of rigid segregation. After an unusual relationship with the landlord's family, and after learning the farming business, the young man acquired land and became a large farmer in Latta, South Carolina. Through his experience we gain valuable insights into several important challenges faced by Black farmers in the South. He struggled with crop allotments, farm loans, farm insurance, crop selection and crop production, as did many other Black farmers. There is useful information on class action lawsuits brought to provide redress for Black farmers. The reader of this book will find valuable information on the life and times of Black farmers in South Carolina."—O'Neal Smalls, Distinguished Professor Emeritus of Law, University of South Carolina, and president and chair, Freewoods Foundation

"For so long, writers have focused on African Americans as slaves or immigrants to the North during the early 20th century. Unraveling the story of generations of one farming family whose sense of place kept them rooted in South Carolina, Petersen reveals that an independence despite travails is a story rarely told in South Carolina."—Lee Gordon Brockington, senior interpreter for the Belle W. Baruch Foundation at Hobcaw Barony

"While focusing on Joe Williams, a descendant of free blacks, Bo Petersen uses simple stories that might be heard sitting on a front porch to illustrate issues that profoundly affected the Pee Dee region such as slavery, tenant farming, education, segregation, discrimination in government farm programs, and the values of an era when a man's word was his bond. To one who grew up in the Pee Dee watershed, the book rings true. It offers significant insight into the issues that define the region while remaining a very enjoyable read."—Suzanne Linder Hurley, author, with Emily Johnson, of A River in Time: The Yadkin-Pee Dee River System

"With an easy journalistic style, Bo Peterson relates the story of a South Carolina family. Interweaving past and present, we follow four generations of the Williams family as they face emancipation, reconstruction, Jim Crow, and the challenges of farm families—both white and black—to remain on the land. Washing Our Hands in the Clouds is more than a family history. It is a triumph of the human spirit."—Eldred E. "Wink" Prince Jr., Coastal Carolina University