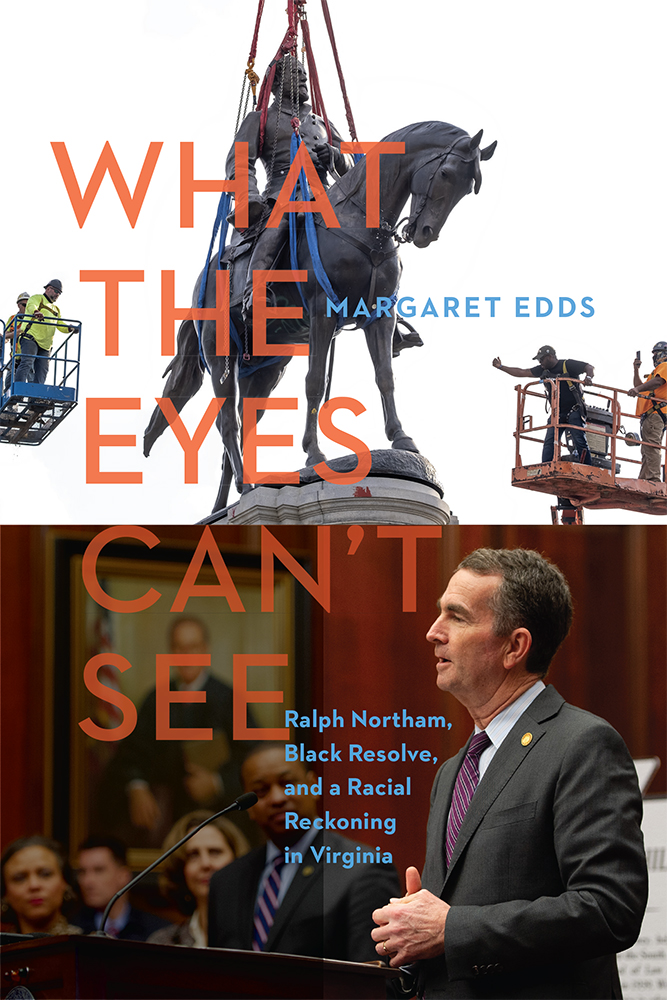 What the Eyes Can't See

Ralph Northam, Black Resolve, and a Racial Reckoning in Virginia

The transformation of Governor Ralph Northam

Virginia Governor Ralph Northam's "blackface scandal" could have destroyed any politician. The photo of Governor Northam purportedly in blackface created a firestorm not only locally but also in every political sphere. What the Eyes Can't See details why Northam's career did not end with the scandal, and how it made him a better governor—and a better citizen.

In this book Margaret Edds draws on unprecedented access to the governor, his aides, and members of the Virginia Legislative Black Caucus, whose initial anger evolved into determination to mine good from an ugly episode. Both scolding and encouraging, they led Northam to a deeper understanding of the racism and pain the photograph symbolized. To Northam's credit, he listened, and more importantly learned the lessons of endemic, systemic racism and applied those lessons to his legislative agenda. Edds provides a revealing examination of race in the nation, how racism might be addressed and reckoned with, and how we all may find a measure of redemption in listening to one another.


Margaret Edds is a former reporter and editorial writer for the Norfolk Virginian-Pilot. She is the author of several books, including We Face the Dawn: Oliver Hill, Spottswood Robinson, and the Legal Team That Dismantled Jim Crow; Finding Sara: A Daughter's Journey; and An Expendable Man: The Near-Execution of Earl Washington Jr.

"Margaret Edds delivers a deeply reported, inside look at how Gov. Ralph Northam weathered a potentially crippling scandal and ultimately helped establish Virginia as a vanguard of social and racial equity policy. She contextualizes it with a compelling examination of Virginia's racial history and the impact on its politics. Having extensively covered Northam's journey, I consider it a rare story of resolve, resilience, and redemption. Edds brilliantly captures it all."—Geoff Bennett, Chief Washington Correspondent for PBS NewsHour

"Margaret Edds, a longtime journalist and talented author, addresses the volatile mix of race and politics that boiled over in Virginia when the sitting governor was revealed to have used blackface decades earlier. Edds movingly chronicles the swift fall and then the remarkable redemption of this embattled governor, whose scandal unexpectedly became the start of historic progress in race relations."—Larry Sabato, director, UVA Center for Politics, and editor, Sabato's Crystal Ball

"Margaret Edds has pulled back the curtain to allow entry into the public and private moments endured by a politician grappling with race as he undergoes and creates transformative change. On February 1, 2019, a repulsive photo featured on Gov. Ralph Northam's medical school yearbook page became widely known and circulated. By June 4, 2020, Northam had come to understand why they announced that the Robert E. Lee statue must and would be removed from the storied Monument Avenue. The space in between is carefully chronicled by Edds, who brings the reader into the drama; introduces us to staff, friends, and family; and encourages us to feel the swirl of emotions and actions. Her engaging writing style and dedication to details makes this a book to sink into and challenges us to think about our own and our society's blind spots around race."—Lauranett L. Lee, public historian and visiting lecturer, Jepson School of Leadership Studies, University of Richmond

"This book is no ordinary biography of Ralph Northam—it illustrates a man and a commonwealth, facing down history. The story transcends the now-infamous blackface controversy. Edds masterfully describes how the events of 2019 relate to America's tortured racial history, the politicization of that history, and one man's attempt to redeem himself—and his state—from the perils the past."—Julian Hayter, author of The Dream Is Lost: Voting Rights and the Politics of Race in Richmond, Virginia, and associate professor of leadership studies, University of Richmond