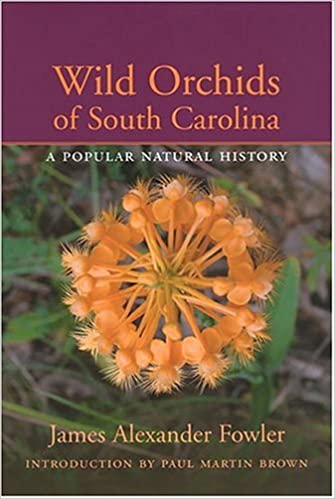 A stunning photographic guide to the Palmetto State's native orchids

Orchids in any setting make for a beautiful sight, but native orchids growing in their natural habitats offer an especially rewarding view for plant enthusiasts, naturalists, and nature lovers of all ages. South Carolina hosts a rich potpourri of these enormously popular wildflowers, thanks in large part to its unique position as the lower boundary of more northerly species and upper boundary of species found in Florida and the gulf states. In Wild Orchids of South Carolina, James Alexander Fowler captures with spectacular photography and encyclopedic knowledge the full glory of the state's native orchid population. From the bogs and bays of the coastal plain to the mountain woodlands, Fowler catalogs rare and widely distributed species, offering a wealth of information for identifying these prized plants.

In addition to providing photographs of each species, Fowler includes common and scientific names, flower descriptions, bloom times, ranges, habitats, pollinators, and refreshingly candid personal observations about the orchids as he encountered them in the wild. He details his experiences of coming upon a show-stopping colony of large yellow lady's slipper orchids (Cypripedium parviflorum var. pubescens) and of locating the rare monkey-face orchid (Platanthera integrilabia).


James Alexander Fowler was born in Bennettsville, South Carolina. As a child, under the influence of his father and maternal great-grandmother, he developed an interest in wildflowers. An independent botanist and computer systems analyst, Fowler holds B.S. and M.A. degrees from Clemson University. He lives with his partner in Greenville, South Carolina.

Paul Martin Brown, a nationally renowned botanist and wild-orchid specialist, provides an introduction to the volume. He explains South Carolina's significance in the larger context of North American orchid habitats and prepares the reader for the striking display of beauty and information assembled in this volume.