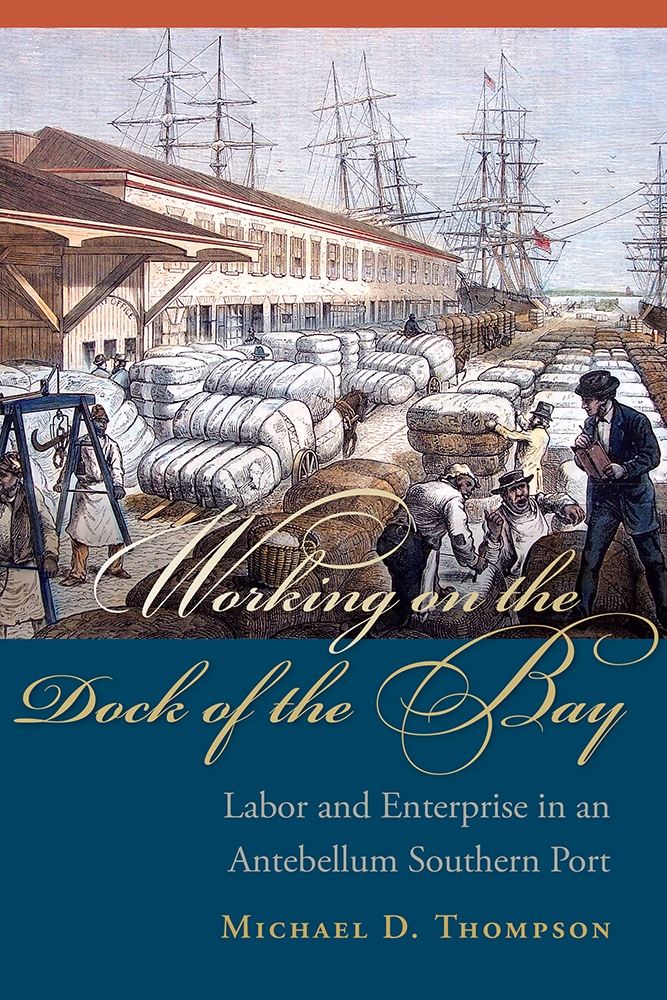 Working on the Dock of the Bay

Labor and Enterprise in an Antebellum Southern Port

Working on the Dock of the Bay explores the history of waterfront labor and laborers—black and white, enslaved and free, native and immigrant—in Charleston, South Carolina, between the American Revolution and Civil War. Michael D. Thompson explains how a predominantly enslaved workforce laid the groundwork for the creation of a robust and effectual association of dockworkers, most of whom were black, shortly after emancipation. In revealing these wharf laborers' experiences, Thompson's book contextualizes the struggles of contemporary southern working people.

Like their postbellum and present-day counterparts, stevedores and draymen laboring on the wharves and levees of antebellum cities—whether in Charleston or New Orleans, New York or Boston, or elsewhere in the Atlantic World—were indispensable to the flow of commodities into and out of these ports. Despite their large numbers and the key role that waterfront workers played in these cities' premechanized, labor-intensive commercial economies, too little is known about who these laborers were and the work they performed.

Though scholars have explored the history of dockworkers in ports throughout the world, they have given little attention to waterfront laborers and dock work in the pre-Civil War American South or in any slave society. Aiming to remedy that deficiency, Thompson examines the complicated dynamics of race, class, and labor relations through the street-level experiences and perspectives of workingmen and sometimes workingwomen. Using this workers'-eye view of crucial events and developments, Working on the Dock of the Bay relocates waterfront workers and their activities from the margins of the past to the center of a new narrative, reframing their role from observers to critical actors in nineteenth-century American history. Organized topically, this study is rooted in primary source evidence including census, tax, court, and death records; city directories and ordinances; state statutes; wills; account books; newspapers; diaries; letters; and medical journals.


Michael D. Thompson is a University of Chattanooga Foundation Associate Professor of American History at the University of Tennessee at Chattanooga. He earned his B.A. in history from the University of Michigan and his M.A. and Ph.D. in history from Emory University. Thompson's manuscript for Working on the Dock of the Bay won the 2011 Hines Prize from the College of Charleston's Program in the Carolina Lowcountry and Atlantic World, and the book was a finalist and runner-up for the South Carolina Historical Society's 2016 George C. Rogers Jr. Award.

"As the first book-length study of southern waterfront workers in the years before the Civil War, Thompson's book breaks important new ground."—H-Net Reviews

"In terms of sheer amount of research done, it would be hard to better Michael D. Thompson. . . . What emerges is [a] portrait of the antebellum Charleston working class in all its complexity and contingency."—Journal of Southern History

"Thompson's portrait of a racial waterfront in flux offers a thick description of everyday life and labor, as well as some astute insights as to how boundaries—white and black, free and enslaved, sick and healthy—crosscut the wharves along the Cooper and Ashley rivers."—American Historical Review

". . . Thompson provides a valuable and praiseworthy scholarly contribution that should be read by anyone interested in the history of slavery, African Americans, labor, and the South."—Journal of American Ethnic History

"[Thompson] provides fresh insights into class and race relations in the city, and contributes much-needed context for the better-documented labor history of southern dock workers in later periods."—Journal of American History

"Thompson's meticulously researched book is an outstanding work of social history. His moving of urban workers from the periphery to the center of Charleston's story is a role model for discovering the lives of those often ignored in histories of the Old South. He describes brilliantly the activities and activism of black and white waterfront workers, indicating clearly the vital nature of their contribution to the antebellum southern economy. Ultimately, he highlights that to understand the successes of failures of post-Civil War Reconstruction one must begin in the fluid race and class relations of the pre-War era."—David Gleeson, professor of American history, Northumbria University

"The topics Thompson addresses are both fresh and significant, and the research upon which this study is built is impeccable. . . . Working on the Dock of the Bay is a superb piece of labor history that engages with many kinds of history and is likely to stand as a landmark for some time to come."—Labor: Studies in Working-Class History

"Meticulous research, lively writing, and balanced interpretations distinguish Michael Thompson's original and revealing history of Charleston's antebellum dockworkers, black and white, enslaved and free. At the intersection of Atlantic commerce and harvests of rice and cotton, the city's dock workers funneled goods, ideas, and hopes into and out of the antebellum South, as this fine work of historical craftsmanship discloses."—Michael P. Johnson, professor of history, Johns Hopkins University

". . . Working on the Dock of the Bay comes highly recommended. It is an unusually clear and well-written work of social history, based on impressive research, and makes an important contribution to our understanding of the antebellum urban South."—H-Slavery