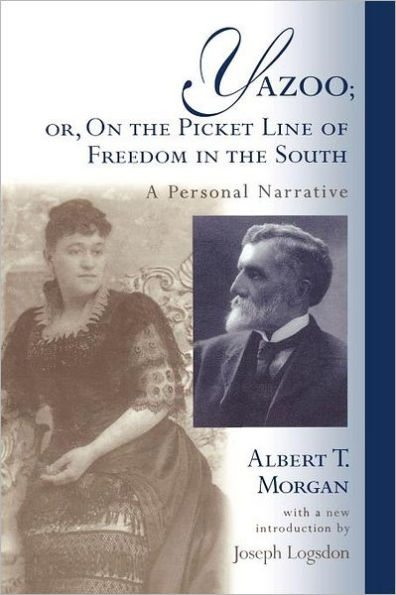 Yazoo; or, On the Picket Line of Freedom in the South

Yazoo is a rare and revealing firsthand account of Reconstruction told by a Wisconsin carpetbagger and devout abolitionist who moved to Mississippi in pursuit of wealth and social reform. Seeking economic opportunity for himself as well as a chance to bring about a new social order in the defeated South, Albert T. Morgan leased a cotton plantation in Yazoo County, Mississippi, in1865. His farming venture failed —as did his efforts to secure interracial democracy—but his decade spent in Yazoo County brought opportunities to serve in elected office as a constitutional delegate, state senator, and county sheriff and supervisor. The decade also gave him an intimate understanding of the trials and tribulations associated with the African American freedmen's struggle for equality. In 1884, nine years after fleeing the state under threat of death, Morgan published Yazoo at his own expense to explain the difficulties he and his compatriots faced in Mississippi.

An absorbing story made all the more poignant by Joseph Logsdon's new introduction, Yazoo offers a sustained narrative about the social and political dynamics of Reconstruction on the plantations, in the local courthouse, on the deserted roads and byways, and even in the bedrooms of leading planters and politicians. In this unparalleled text Morgan documents the creation of the Mississippi Plan, which became the model for former Confederates' "redemption" of the South, and traces the orchestration of interracial democracy's failure to the manipulations of the former slaveholding elite.


Albert T. Morgan (1842–1922) was a student at Oberlin College in 1860, a Union officer in the Civil War, and a Yankee entrepreneur and Radical Republican officeholder in Yazoo County, Mississippi. He also worked as a clerk in the U.S. Pension Office and as a lawyer and entrepreneur in Kansas and Colorado.

Joseph Logsdon (1938–1999) was a scholar of the Reconstruction Era and the author of works on African American entrepreneurs, Radical Republicans, and Louisiana history.