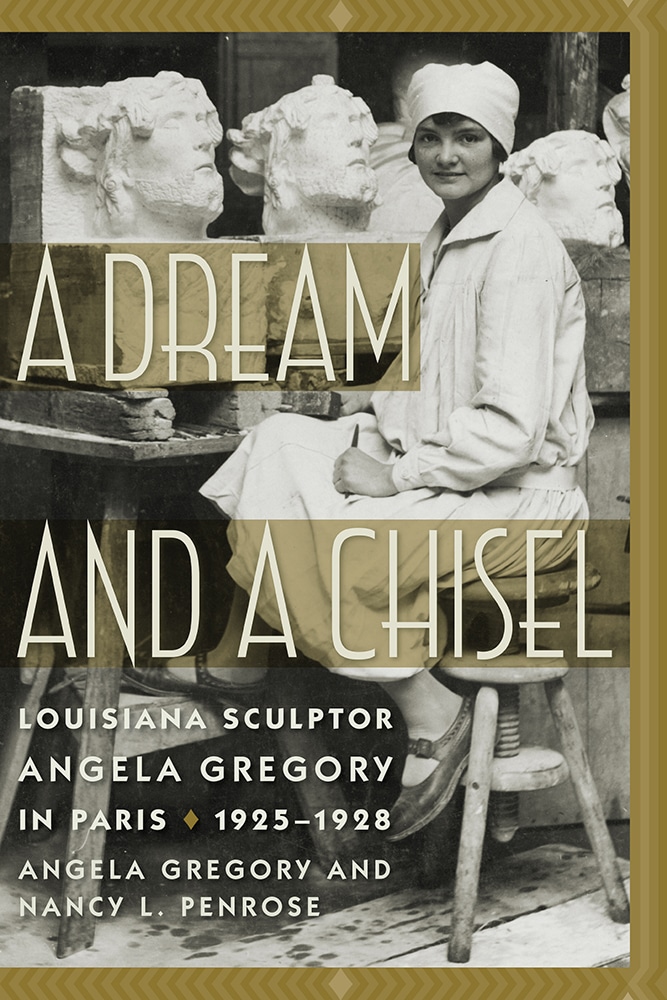 A Dream and a Chisel

A portrait of a young artist's formative years studying sculpture in Paris, recounted in her own words

Angela Gregory is considered by many the doyenne of Louisiana sculpture and is a notable twentieth century American sculptor. In A Dream and a Chisel, Angela Gregory and Nancy Penrose explore Gregory's desire, even as a teenager, to learn the art of cutting stone and to become a sculptor. Through sheer grit and persistence, Gregory achieved her dream of studying with French artist Antoine Bourdelle, one of Auguste Rodin's most trusted assistants and described by critics of the era as France's greatest living sculptor. In Bourdelle's Paris studio, Gregory learned not only sculpting techniques but also how to live life as an artist. Her experiences in Paris inspired a prolific sixty-year career in a field dominated by men.

After returning to New Orleans from Paris, Gregory established her own studio in 1928 and began working in earnest. She created bas-relief profiles for the Louisiana State Capitol built in 1932 and sculpted the Bienville Monument, a bronze statue honoring the founder of New Orleans, in the 1950s. Her works also include two other monuments, sculptures incorporated into buildings, portrait busts, medallions, and other forms that appear in museums and public spaces throughout the state. She was the first Louisiana woman sculptor to achieve international recognition, and, at the age of thirty-five, became one of the few women recognized as a fellow of the National Sculpture Society. Gregory's work appeared in group shows at many prestigious museums and in exhibitions, including the Salon des Tuileries and the Salon d'Automne in Paris, the Palace of the Legion of Honor in San Francisco, the National Collection of Fine Arts in the Smithsonian in Washington, D.C., and the Metropolitan Museum of Art in New York.

This memoir is based on Penrose's oral history interviews with Gregory, as well as letters and diaries compiled before Gregory's death in 1990. A Dream and a Chisel demonstrates the importance of mentorships, offers a glimpse into the realities of an artist's life and studio, and captures the vital early years of an extraordinary woman who carved a place for herself in Louisiana's history.


Angela Gregory (1903–1990) was an internationally recognized American sculptor and a professor and sculptor in residence from 1962 to 1976 at St. Mary's Dominican College in New Orleans, Louisiana. She was a fellow of the National Sculpture Society and in 1982 was inducted as one of France's Chevalier de I'Ordre des Arts et des Lettres (Knight of the Order of Arts and Letters).

Nancy L. Penrose is an award-winning writer whose essays have been published in many literary magazines and in anthologies. She is the coauthor, with Khoo Seow Hwa, of Behind the Brushstrokes: Appreciating Chinese Calligraphy. From 1999 to 2014 Penrose served as writer, editor, and communications coordinator for the University of Washington's ocean observatory program.

"[A] richly textured account of Gregory's pursuit to become a sculptor an invaluable repository now exists for future study of this significant American sculptor."—Woman's Art Journal

"It is a brilliant evocation of the 1920s life in and around Bourdelle's studio, and a very moving evocation of Angela Gregory's personality."—Amélie Simier, director, Musée Bourdelle, Paris

"This detailed text is a testament to two dynamic women—Nancy Penrose, whose decades–long effort to tell the story of Angela Gregory's artistic awakening that led to this insightful book, and to Gregory herself, who unabashedly committed to sculpture despite societal expectations"—Amy Galpin, chief curator, Patricia & Phillip Frost Art Museum

"New Orleans native Angela Gregory's story of her years in the Paris atelier of a prominent sculptor is a fascinating tale. In forthright language she recounts the challenges she faced as an American and as a woman, shedding light on the rigors and benefits of academic training. Her narrative is peppered with entertaining anecdotes and descriptions of her encounters with such notable figures as her mentor Antoine Bourdelle and his wife, Krishnamurti, and Joseph Campbell, who encouraged Gregory to write about her Parisian experiences."—Martha R. Severens, curator, Greenville County Museum of Art 1992–2010

"vivid and entrancing... If you love art, French culture, and family stories, you will love getting to know Angela Gregory."—Southeastern Librarian