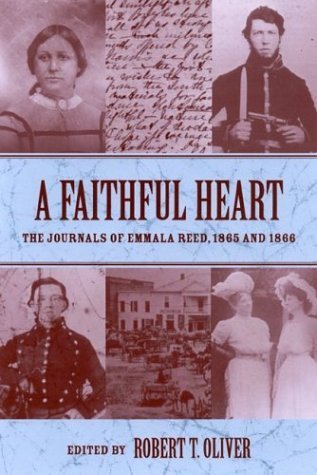 A record of transition to an uneasy peace

Emmala Reed (1839-1893) may not have watched the unfolding of the Civil War from the front lines, but she nonetheless witnessed the collapse of the Confederacy. With the fall of Charleston and the burning of Columbia, waves of refugees flooded into her hometown of Anderson, South Carolina. Returning Confederate soldiers passed through this isolated settlement to get rations of cornmeal on their journey home, and eventually Union troops occupied the town. All the while this twenty-five-year-old, unmarried woman recorded what she observed from Echo Hall, her family home on Anderson's Main Street. Reed's journals from 1865 and 1866 present a detailed account of life in western South Carolina as war turned to reconstruction.

Reed's postwar writings are particularly important given their rarity—many Civil War diarists stopped writing at war's end. As the daughter of Judge Jacob Pinckney Reed, a prominent lawyer, merchant, and prewar Unionist, Reed offers a perspective different from the usual ardent secessionist. Also unlike many diarists of the period, Reed lived in a small town rather than on a plantation or in an urban center.

In her journals Reed captures the disheartening, chaotic period known as Presidential Reconstruction, the short span of time between the Confederate surrender and the beginnings of Congressional Reconstruction. She describes the apprehensions of people living in a relatively remote area at the war's end, the wide-eyed, end-of-the-war rumors that circulated throughout the South, and the steady procession of historically noteworthy people who moved through Anderson, many of whom visited her father at Echo Hall.

Into her account of public travail Reed intertwines details about her private life. She depicts social engagements, religious events, and school activities while often recording her hope for the return of her longtime suitor. Adding a heartbreaking twist to her chronicle, Reed writes candidly of her anguish and humiliation when, at last, he comes home only to marry another.

"Robert T. Oliver's A Faithful Heart: The Journals of Emmala Reed, 1865 and 1866 is a brief but highly informative chronicle of the postwar social and economic woes of a developing, but small, South Carolina town—Anderson. A valuable part of this saga, as recorded by the diarist, are the hundreds of individuals that she interacted with, people that the author has meticulously identified and connected to the town and the surrounding region. This is less a story of an individual than one of a community."—Louis P. Towles, editor of A World Turned Upside Down: The Palmers of South Santee, 1818–1881