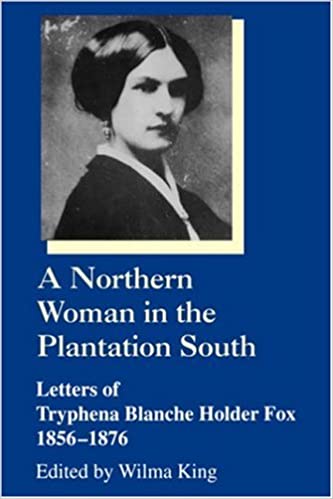 A Northern Woman in the Plantation South

Tryphena Blanche Holder Fox's correspondence with friends and relatives chronicles the triumphs and tragedies of a woman from Massachusetts struggling to combine the roles of dutiful daughter, caring sister, faithful wife, and loving mother while living in rural Louisiana at the time of the Civil War. Tryphena left Massachusetts to work as a tutor on a Mississippi plantation before marrying a Louisiana doctor and moving to Plaquemines Parish. While the marriage did improve Tryphena's social and economic status, it did not make her the wealthy woman she had hoped to become. She fought the hardship and isolation of a rural river community by maintaining a lively correspondence with relatives and friends in New England. Her letters are significant because, in contrast to the correspondence of prosperous plantation mistresses, they portray the daily concerns of a middle-class woman whose children outnumbered her servants and whose husband was a salaried professional rather than a planter.

Like many Northern travelers, Tryphena wrote about social, political, and economic conditions. Unlike those travelers, however, she remained in the South and quickly adopted the region's customs, including its prejudices. Her letters recount interactions with domestic servants—both black and white—and with her neighbors—both rich and poor. They expose Tryphena's racism and class biases as these intensified during her residence in Louisiana. In fact, her Southern stance put her at odds with a brother who joined the U.S. Navy while she supported the Confederacy during the Civil War. Aware of her own foibles and her acerbic wit, Tryphena begged her correspondents to keep her letters confidential.

This collection includes 81 of the 187 Tryphena Blanche Holder Fox letters permanently housed at the Mississippi Department of Archives and History.


Wilma King is Strickland Professor of African American History at the University of Missouri-Columbia. She holds a Ph.D. in American history from Indiana University.

"Fox's letters are valuable because they provide the reader with a firsthand account of the life of a woman who was not the wife of a planter, but a woman of modest means who faced the common problems of birth, illness, and death in the Civil War era."—Journal of Southern History

"Seldom does a collection of correspondence provide the rich and varied commentary found in the letters of Tryphena Blanche Holder Fox."—Louisiana History

"The 81 letters collected here reveal the writer as a resourceful woman, much concerned with family, who harbored intellectual and social aspirations. ... The letters reflect the struggle for survival of a middle-class couple."—Publishers Weekly