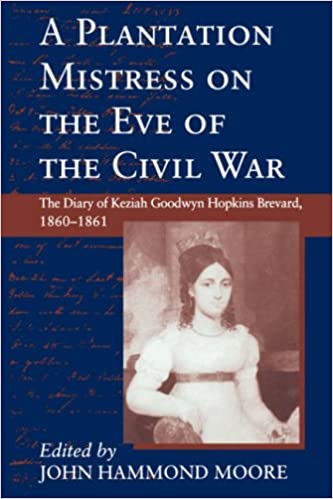 A Plantation Mistress on the Eve of the Civil War

The diary Keziah Brevard documents one plantation mistress's reflections on the momentous events that shook the South during the months leading up to the Civil War: the election of Abraham Lincoln, South Carolina's secession convention, and the attack on Fort Sumter. A childless middle-aged widow, Brevard lived nine miles from Columbia, South Carolina, with her slaves as her only companions. In her diary she recorded everyday stewardship of two plantations, a farm, and a gristmill. In the journal Brevard also grappled with her most private struggles, including her vacillation about the morality of secession and slavery, her fear of abolitionists, and her sense of foreboding about the coming conflict.

John Hammond Moore, formerly a writer-researcher on the staff of the Thomas Cooper Library at the University of South Carolina, is author of Columbia and Richland County: A South Carolina Community, 1740–1900.

"Vividly evokes the mundane concerns of the antebellum plantation period as well as events leading up to the fall of Fort Sumter and the beginning of the Civil War."—Publishers Weekly