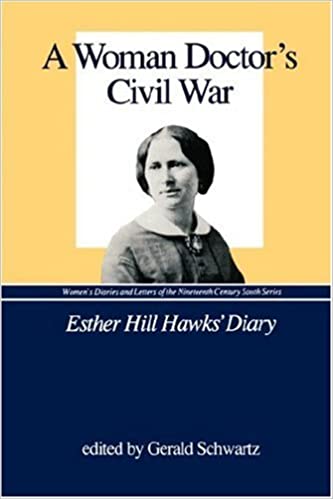 The Diary of Esther Hill Hawks

A physician, a Northerner, a teacher, a school administrator, a suffragist, and an abolitionist, Esther Hill Hawks was the antithesis of Southern womanhood. And those very differences destined her to chronicle the era in which she played such a strange part.

While most women of the 1860s stayed at home, tending husband and house, Esther Hill Hawks went south to minister to black Union troops and newly freed slaves as both a teacher and a doctor. She kept a diary and described the South she saw—conquered but still proud. Her pen, honed to a fine point by her abolitionist views, missed mothing as she traveled through a hungary and ailing land.

In the well-known Diary from Dixie, Mary Boykin Chestnut depiced her native Southland as one of cavaliers with their ladies, statesmen and politicians, honor and glory. But Hawks painted a much different picture. And unlike Chestnut's characters, hers were liberated slaves and their hungary children, swaggering carpetbaggers, occupation troops far from home, and zealous missionaries. Revealed in the pages of this diary is a woman of vast energy, intelligence, and fortitude, who transformed her idealism into action.


Born in Brooklyn, New York, Gerald Schwartz is a professor of history at Western Carolina University in Cullowhee, North Carolina. A graduate of Mexico City College, Schwartz holds a PhD from Washington State University. His article, "An Integrated Free School in Civil War Florida," which also concerns the career of Dr. Esther Hill Hawks, appeared in The Florida Historical Quarterly.

"a delightful and valuable addition to the literature of the Civil War and Reconstruction."—Florida Historical Quarterly

"The diary of Esther Hill Hawks increases our knowledge about early Reconstruction efforts and the unique social experiment involving newly freed blacks of the Sea Islands area of the South."—Register of the Kentucky Historical Society

"This volume presents a point of view not normally encountered in Civil War Literature. Those attracted to black history, women's history, or the history of the Civil War along the Southeast coast will find much of interest . . ."—Civil War Book Exchange

"The three volumes of this diary discovered in a pile of trash in Essex County, Massachusetts in 1975 add fresh insights to the conventional military and political treatises on the Civil War."—El Escribano