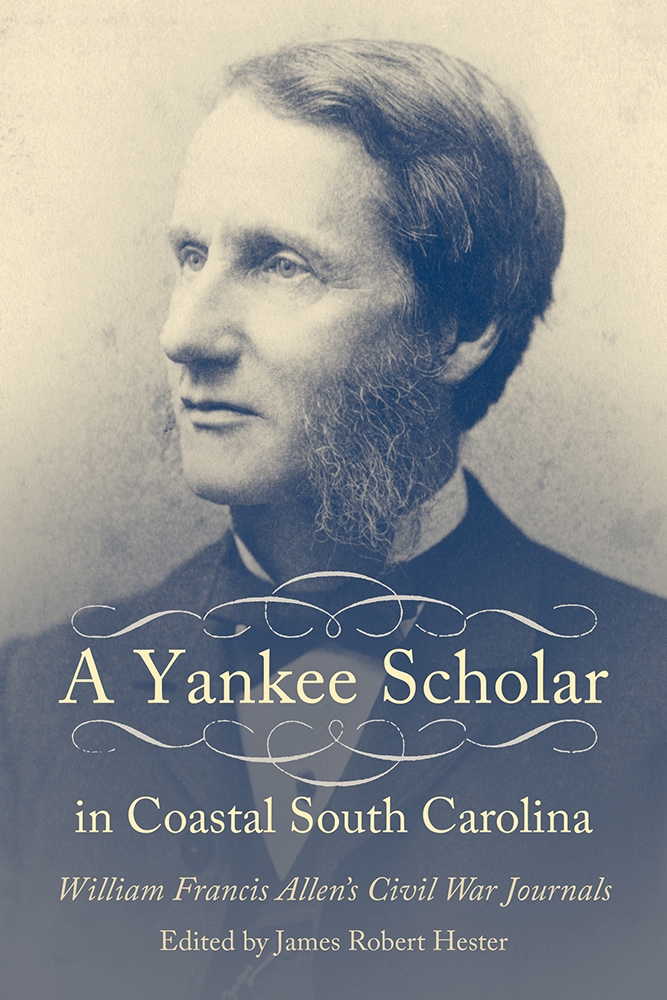 New Englander William Allen (1830-1889) is mostly known today as the lead editor of the 1867 anthology Slave Songs of the United States, the earliest published collection of Negro spirituals, and as a distinguished history professor at the University of Wisconsin. During the Civil War, he served from late 1863 through mid-1864 as a member of the "Gideonite band" of businessmen, missionaries, and teachers who migrated to the South Carolina Sea Islands as part of the Port Royal Experiment. After the war, he served as assistant superintendent of schools in Charleston from April through July 1865. Allen kept journals during his assignments in South Carolina in which he recorded events and impressions of about several hundred people, especially ex-slaves, along with fellow Gideonites, Union soldiers and officials, and ex-Confederates.

In A Yankee Scholar in Coastal South Carolina, editor James Robert Hester has transcribed Allen's journals and fully annotated them to create a significant documentary source of information on Civil War South Carolina. Hester notes that Allen's journals are more than travelogues, as he often analyzed the people, events, and ideas he encountered. In addition to being a competent amateur musician, Allen was a Harvard-trained historian and philologist and brought his impressive skills to his writing. Later in his life he became an eminent professor of history at the University of Wisconsin.

Hester's introductory chapter summarizes Allen's life from his early childhood in Northborough, Massachusetts, through his education at Harvard, his duties as associate principal of the West Newton (Massachusetts) English and Classical School, and his engagement in the Port Royal Experiment. The introduction also surveys Allen's essays on the South published in the Christian Examiner during the Civil War and his articles written for The Nation at the war's end. Two chapters cover Allen's St. Helena and Charleston journals, respectively, and the book closes with a short epilogue. The work is generously annotated, containing almost 600 endnotes, which amplify Allen's narrative and complement Allen's vivid glimpses of coastal South Carolina during the Civil War.


James Robert Hester retired in 2005 from the U.S. Department of Energy Savannah River Site near Aiken, South Carolina, where he started his career as an engineer in 1973. Hester has spent his retirement as a student, first enrolled at Augusta State University, where he earned a bachelor of arts in music in 2010, and currently at Georgia Regents University, where he is majoring in history and specializing in antebellum black music studies. Hester became interested in William Allen's writings in 2010 while writing a thesis on slave songs of Augusta.

"Hester's work is a valuable window into a long-vanished world and an excellent companion to modern works that try to explain that world to us."—Blue and Gray Magazine

"This perceptive edition of Allen's journals not only illuminates the experiences of the dedicated educators and reformers in coastal South Carolina in the early days of emancipation but also revives the memory of a notable Nineteenth Century historian. Civil War and regional scholars alike will be grateful to Bob Hester for years to come for his careful work."—Russell K. Brown, author of To the Manner Born: The Life of General William H.T. Walker

"William Francis Allen's Civil War journals provide a remarkable glimpse into rural and urban coastal South Carolina in the closing months of the Civil War. While under Union occupation in 1863–64, and immediately after the war's end in 1865, Allen's compassionate observations as a scholar and historian, although with an understandable Northern bias, offer an insider's view of earliest efforts to educate the freed slaves. Particularly interesting are conversations he recorded with planters and long-time Carolina residents regarding their views, often surprisingly conciliatory and accepting of the inevitable fate of the South. James Robert Hester as editor has done a masterful job in interpreting, contextualizing and annotating Allen's journals, making this an essential volume for any library of Civil War literature."—Erick Montgomery, executive director, Historic Augusta, Inc.

"Hester has annotated and presented to us the remarkable journals of William Allen, an absorbing account of one man's journey South during and after the Civil War. With the unique perspective of an outsider from Massachusetts, Allen's first journal covers his work on St. Helena Island in 1863 and 1864 as part of the Port Royal Experiment. The second covers his time as superintendent of education in Charleston, SC. in 1865. A scholarly and thinking man, Allen offers first-hand impressions of the newly freed African Americans, of the degradation of slavery as a system of labor, and of his appreciation of the peoples' songs and the unfamiliar Gullah language. With comprehensive appendices of thorough primary research, Hester delivers an amazing and significant work, a noteworthy contribution to historical understanding."—Orville Vernon Burton, author of Age of Lincoln and Penn Center: A History Preserved