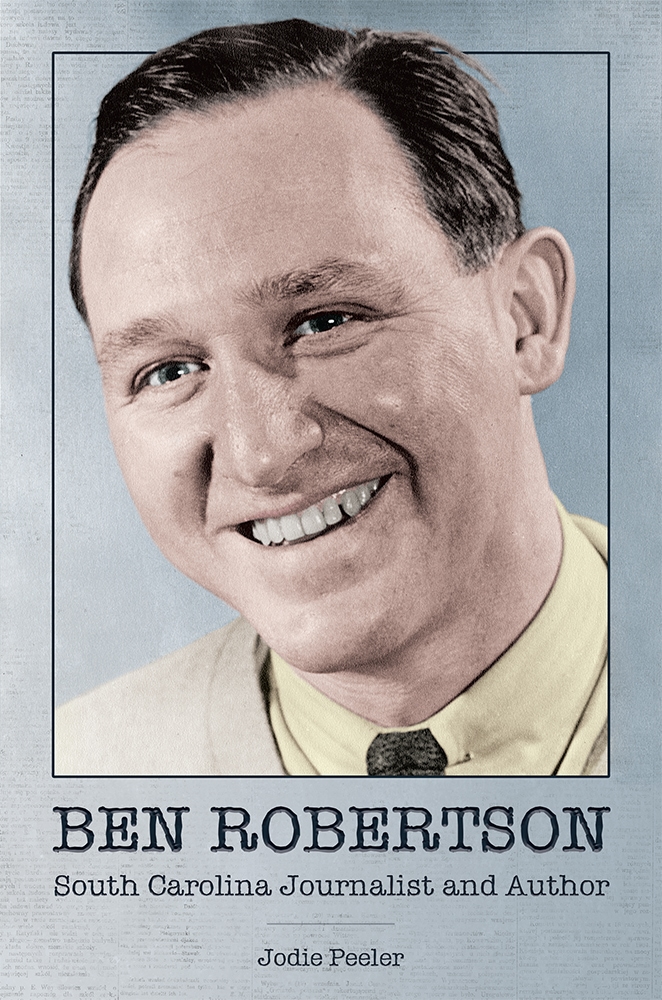 In Ben Robertson: South Carolina Journalist and Author, Jodie Peeler tells the story of a man consumed with a need to see the world but whose heart never really left home. Drawing heavily on Robertson's writings and personal papers, Peeler describes his active career as a journalist, which took him to Hawaii, Australia, Europe, Java, New York, and Washington, D.C.

The early years of Robertson's career were spent as a reporter for the New York Herald-Tribune. After several years as a freelance writer, he became a World War II correspondent covering England for the New York newspaper PM. While Robertson's wartime dispatches drew attention and praise, they represented but one aspect of the man's wide-ranging works and career, for the Ben Robertson who witnessed destruction and heroism in the fires of London was also a proud son of South Carolina.

In addition to his work as a journalist. Robertson wrote three books. Travelers' Rest, a fictionalized account of his ancestors' settling in South Carolina, ruffled southern feathers. In I Saw England he presents a firsthand account of the Battle of Britain and advocates for the United States to intervene in World War II. His heartfelt memoir, Red Hills and Cotton, which recalls his boyhood days in Pickens County and calls for the South to look to the future, became a southern classic. In 1943, while en route to his new job as London bureau chief for the New York Herald-Tribune, Robertson lost his life in a plane crash.

Throughout his decidedly brief but adventurous life, Robertson never stopped being what one friend described as "a sentimental South Carolinian who carried his dreams on the tip of his tongue." And over time he evolved into a progressive voice calling on the South to reevaluate its attitudes on race and economics. This is the story of that proud South Carolinian, from the dreams that propelled him around the world to the sentiment that always called him home.


Jodie Peeler is professor of communications at Newberry College, where she teaches journalism and specializes in media history. A Greenwood County native, Peeler earned her master's and doctoral degrees from the University of South Carolina.

"Peeler does an admirable job of reviving the story of a man whom history has largely forgotten...She is meticulous, thoughtful and thorough. Robertson deserved a biographer of her caliber, and got it."—The Post & Courier (Charleston)

"This admirable account chronicles the life of South Carolina writer Ben Robertson, Jr., the tough, tenacious and talented World War II war correspondent and introspective author. This fast-paced biography is a compelling validation of the rural values which provided the constant foundation for Robertson's perspectives wherever he was in the world."—Ben Moise, author of Ramblings of a Lowcountry Game Warden

"Ben Robertson's too short career meshes certainties with insecurities, ambitions with ambiguities. Jodie Peeler, honest about Robertson's shortcomings, captures his successes as a journalist and labors as an author. Robertson's life plays out against a backdrop of his Southern heritage and its challenges. A good read for Southerners; a good lesson for journalists."—Charles Bierbauer, Dean Emeritus, University of South Carolina

"[E]legantly traces Robertson's life story... a compelling narrative that contextualizes Robertson as a son of the South and an actor in big-time journalism who grappled with injustice, inequality, and racism."—Journal of Southern History