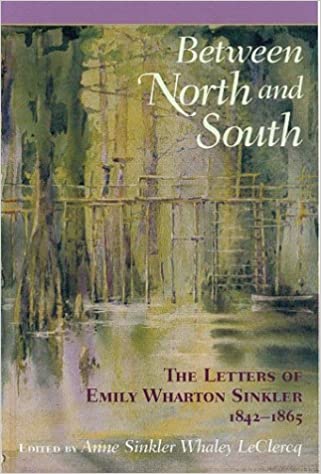 Between North and South

Emily Wharton Sinkler was only eighteen years old when she began to write to distant relatives, chronicling her experiences on an antebellum cotton plantation. The daughter of prominent Philadelphia lawyer Thomas Wharton, Emily had married Charles Sinkler of St. Johns Berkeley Parish and Charleston, South Carolina, and moved south to begin a new life. Collected by her great-great-granddaughter Anne Sinkler Whaley LeClercq, Emily's letters ring with keen insights into Southern society and offer a definitive account of a young woman transplanted to the South in 1842 through the Civil War. This frequent and thorough correspondence conveys the rich and varied details of a time divided between North and South.

Like her contemporary Mary Boykin Chesnut, Emily relates tales of colorful characters and stimulating events during a turbulent era of American history. Her urban background contrasted greatly with her daily duties as a rural plantation mistress, and she describes creating a world of culture and charm in the midst of the swamps of South Carolina. She writes of fabulous lancing tournaments, exciting horse races, frightening ocean voyages, and vivid evenings full of games, dancing, and music. At the same time, she was pioneering her way in a rural, isolated environment, inventing alternatives for everyday necessities, and managing the resources of a plantation. Much of her time was consumed by cooking, sewing, gardening, and mothering, and she excelled at these routine responsibilities. She also tells of her profound interest in religion and African American culture and how she sought to get around a South Carolina law that forbade schooling for African Americans by establishing a church where she taught reading through song and prayer. Determined and inventive, Emily Sinkler lived very successfully in two different worlds: cosmopolitan Philadelphia and the slaveholding South. Her passionate account of the antebellum period re-creates a time in American history when both regions were setting a perilous course.


Anne Sinkler Whaley LeClercq has been the director of libraries at The Citadel's Daniel Library in Charleston, South Carolina, since 1996. A graduate of Duke University in Durham, North Carolina, she holds an M.A. in librarianship from Emory University in Atlanta, Georgia, and a J.D. from the University of Tennessee in Knoxville. LeClercq is the author of An Antebellum Plantation Household: Including the South Carolina Low Country Receipts and Remedies of Emily Wharton Sinkler. She lives in Charleston.