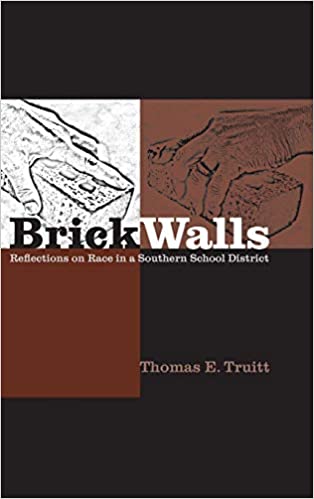 Reflections on Race in a Southern School District

A school superintendent's firsthand experiences with racial politics in education

In 1987, when veteran school administrator Thomas E. Truitt took the post of district superintendent in Florence, South Carolina, he assumed leadership of a public school system in denial of its racial disharmony. More than three decades after Brown v. Board of Education, Florence District One had never accomplished an integration plan that met federal approval; rather the district had skirted the intent of the federal mandate by employing "freedom of choice" and traditional attendance zones. In the 1990s a single issue—the need to replace an aging, predominantly black elementary school—brought to the fore the local population's anguished attitudes about race and education. Brick Walls recounts in wrenching detail how legacies of discrimination and injustice combined to divide a community along racial lines.

Truitt takes readers into the complex inner workings of a modern school system, detailing the relationships between school boards and professional administrators to which few parents or citizens are privy. He describes a two-year struggle that included heated public meetings, an NAACP lawsuit, a federal court hearing, and a court-mandated change in the election of school board members. Shedding light on the intractability of racial problems in South Carolina, Truitt stresses that the story of what happened in Florence cannot be understood in isolation but must be viewed as a tale that exposes much about the current state of public education in the South and across the United States.

"Written from the vantage point of a central participant, Brick Walls is an original case study of modern manifestations of the civil rights struggle still ongoing in American public education. This cautionary tale from Florence District One is a story that ought to be told, one from which leaders in other communities can learn, and Thomas Truitt is to be commended for sharing it with us."—Frye Gaillard, author of The Dream Long Deferred and Cradle of Freedom: Alabama and the Movement that Changed America

"Veteran educator and school administrator Dr. Thomas Truitt writes from the perspective of both a participant in and an observer of community dynamics. Somewhat painfully the reader is compelled to experience the cumulative impact of intended and inadvertent actions which confound the unity to which the community aspires. This case study of schools and the community they serve should be read by all those who strive to influence and lead in public settings."—Jo Anne Anderson, executive director, State of South Carolina Education Oversight Committee

"Thomas Truitt's book is at once an inspiring and disheartening history. It is the story of a society that is moving only painfully towards racial reconciliation, an account of courageous leadership amidst relentless adversity, a tale in microcosm of the two Americas we sadly remain."—Bud Ferillo, producer and director of Corridor of Shame: The Neglect of South Carolina's Rural Schools