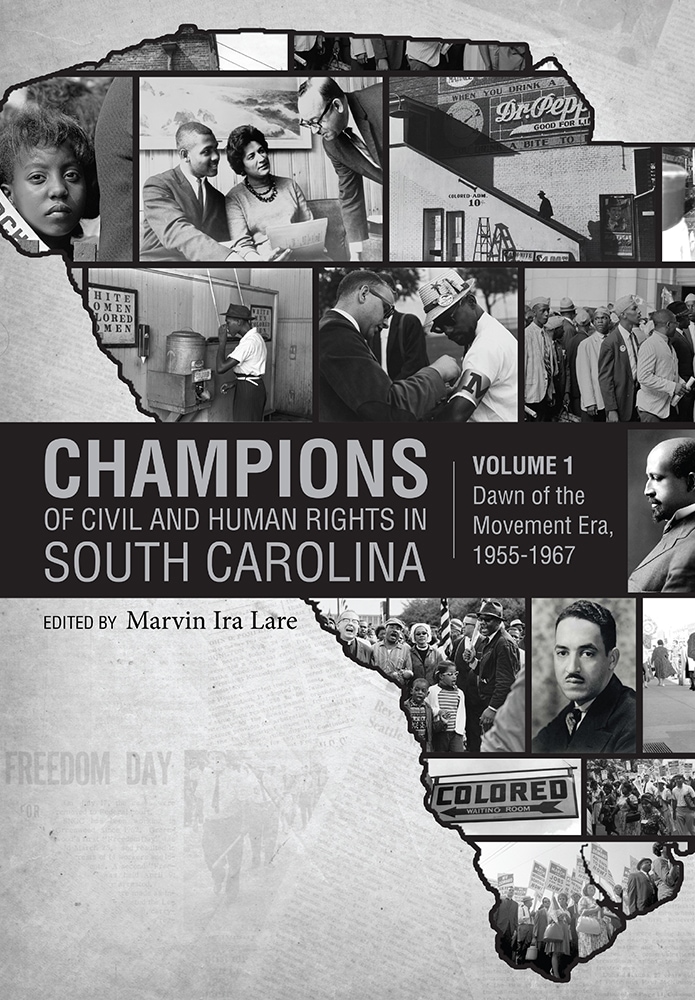 Champions of Civil and Human Rights in South Carolina, Volume 1

Champions of Civil and Human Rights in South Carolina is a five-volume anthology spanning the decades from 1930 to 1980 with oral history interviews of key activists and leaders of the civil rights movement in South Carolina. Editor Marvin Ira Lare introduces more than one hundred civil rights leaders from South Carolina who tell their own stories in their own words to reveal and chronicle a massive revolution in American society in a deeply personal and gripping way. This ambitious project of the University of South Carolina's Institute for Public Service and Policy Research was funded in part by the South Carolina Bar Foundation, the Southern Bell Corporation, and South Carolina Humanities.

The five volumes serve as a collective memoir featuring original oral history interviews with significant figures in the civil rights movement of the Palmetto State, a survey of archived interviews, a variety of published and unpublished narratives, and illuminating black-and-white photographs. Every page opens doors to new historical evidence and to new insights regarding the people, places, and events of the civil and human rights struggle in South Carolina.

Volume 1, Dawn of the Movement Era, 1955-1967, begins with the landmark 1954 Supreme Court ruling on Brown v. Board of Education in which the Court declared unconstitutional state laws establishing racially segregated public schools. The ruling prompted strong reactions throughout the nation. In South Carolina white resistance prompted boycotts of merchants by the local NAACP and some of the earliest mass movement protests in the United States. This collection features oral histories from famous leaders U.S. Congressman James E. Clyburn, Septima Poinsette Clark, and I. DeQuincy Newman, as well as small-town citizens, pastors, and students, all sharing their experiences, motivations, hopes and fears, and how they see the struggle today.


Marvin Ira Lare is a retired minister of the United Methodist Church and a veteran administrator of public service projects for the South Carolina Department of Social Services and Community Care, Inc., an interfaith community service organization. His early ministry in the inner city of Los Angeles led him to champion equity and justice issues. He specialized in community, human, and economic development, and participated in many civil rights demonstrations, including the Selma to Montgomery march, and he attended the funeral of Martin Luther King, Jr., in Atlanta.

"Interviews with Fred Henderson Moore, James E. Sulton Sr., and Matthew Douglas McCollom, for example, offer valuable insight into the struggle for racial justice in Orangeburg, South Carolina, in the years preceding the Orangeburg Massacre, providing critical context to a tradegy too often described as an isolated incident."—The Journal of Southern History

"Lare's comprehensive book offers a compelling overview of the full spectrum of iconic heroes who paved the way for progress we have made in racial change. Once I began reading, I could not stop. This is a must-read contribution to our largely untold history."—Cecil Williams, author, photographer, director, Historical Preservation, Claflin University

"With sensitivity and skill, through first person accounts, Marvin Lare weaves a tapestry of heroic involvement in the struggle for civil rights that reflects our longing for social justice."—Keller Bumgardner Barron, ERA Ratification Campaign, chair, 1972-76, League of Women Voters of the United States

"In Champions, Marvin Lare has assembled a remarkable set of interviews with known and unknown activists who brought civil rights to fruition in South Carolina. Their unvarnished reflections include moving stories of individual and community struggles sustained by determination, courage, and sacrifice."—Hayes Mizell, director (1987-2003), Program for Student Achievement, Edna McConnell Clark Foundation

"Marvin Ira Lare deserves thanks for amassing in one series an encyclopedia of knowledge that documents the Civil Rights Movement in South Carolina from its inception through 1980. Through oral histories, documents, interviews and photos, Lare provides the data that will attract researchers, teachers, students, and the interested public for years. The reader will better understand the social complexity of the 20th century, through the voices of national, state, and local leaders who advocated for freedom and civil rights. Lare's work lays the foundation to help us more clearly understand the contemporary questions of race and justice in South Carolina."—Randy Akers, executive director, South Carolina Humanities