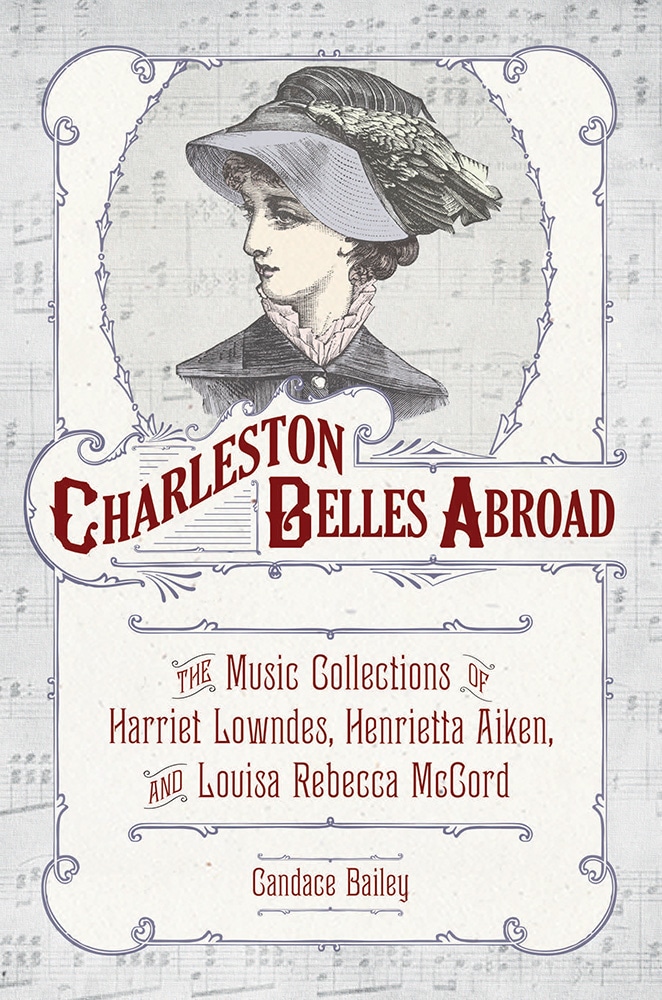 In Charleston Belles Abroad, Candace Bailey examines the vital role music collections played in the lives of elite women of Charleston, South Carolina, in the years leading up to the Civil War.

Bailey has studied a substantial archive of music held at several southern libraries, including the library in the historic Aiken-Rhett House, once owned by William Aiken Jr., a successful businessman, rice planter, and governor of South Carolina. Her skill as a musicologist enables her to examine the collections as primary sources for gaining a better understanding of musical culture, instruction, private performance, cultural tourism, and the history of the music industry during this period.

The bound and unbound collections and their associated publications show that international travel and music education in Europe were common among Charleston's elite families. While abroad, the budding musicians purchased the latest music publications and brought them back to Charleston, where they often performed them in private and at semipublic events.

Through a narrow exploration of the collections of these elite women, Bailey exposes the cultural priorities within one of the South's most influential cities and illuminates both the commonalities and discrepancies in the training of young women to enter society. A noteworthy contribution to southern and urban history, Charleston Belles Abroad provides a deep study of music in the context of transatlantic values, interpersonal relationships, and stability and tumult in the South during the nineteenth century.


Candace Bailey is a professor in the Music Department at North Carolina Central University in Durham. She received her master's and Ph.D. in musicology from Duke University. Her other books include Music and the Southern Belle: From Accomplished Lady to Confederate Composer and Seventeenth-Century British Keyboard Sources.

"In her meticulously researched new study, Candace Bailey explores women's lives through the music they performed and owned. She traces local and regional networks of the antebellum South, illuminating connections with wider American and European elite culture. Both broad conventions and the voices of individual women emerge in a fascinating picture of social identity shaped and expressed through music."—Jeanice Brooks, University of Southampton

"Candace Bailey provides fascinating historical insight of great value to scholars of the antebellum South. Her careful examination of music books owned by three upper-class Southern women reveals much about them, their families, and their communities and clearly illustrates the importance of music in the antebellum South and the wealth of information revealed by the study of musical artifacts."—Katherine K. Preston, past president, Society for American Music

"Deftly navigating between the disciplines of southern studies, women's history, and musicology, Bailey has created a meaningful and readable tour through a morass of silent papers. Charleston Belles Abroad recovers a lost conversation about music, culture, and society in an engaging manner deserving of emulation."—Nicholas Butler, historian, Charleston County Public Library

"Candace Bailey examines the binder's volumes of Harriet Lowndes, Henrietta Aiken, and Louisa Rebecca McCord, daughters of some of the wealthiest and most influential families in Charleston, South Carolina. The bulk of this book is a deeply researched study of the provenance of these pieces, mostly for voice and piano... it teases out information on the quality of available instruction, the influence of opera, opportunities for attending musical performances in Charleston and abroad, trends in musical styles, the backgrounds of music sellers and teachers, and the existence of touring professional musicians and women composers...Bailey's careful research lays the basis for a reappraisal of southern women's accomplishments."—Journal of American History