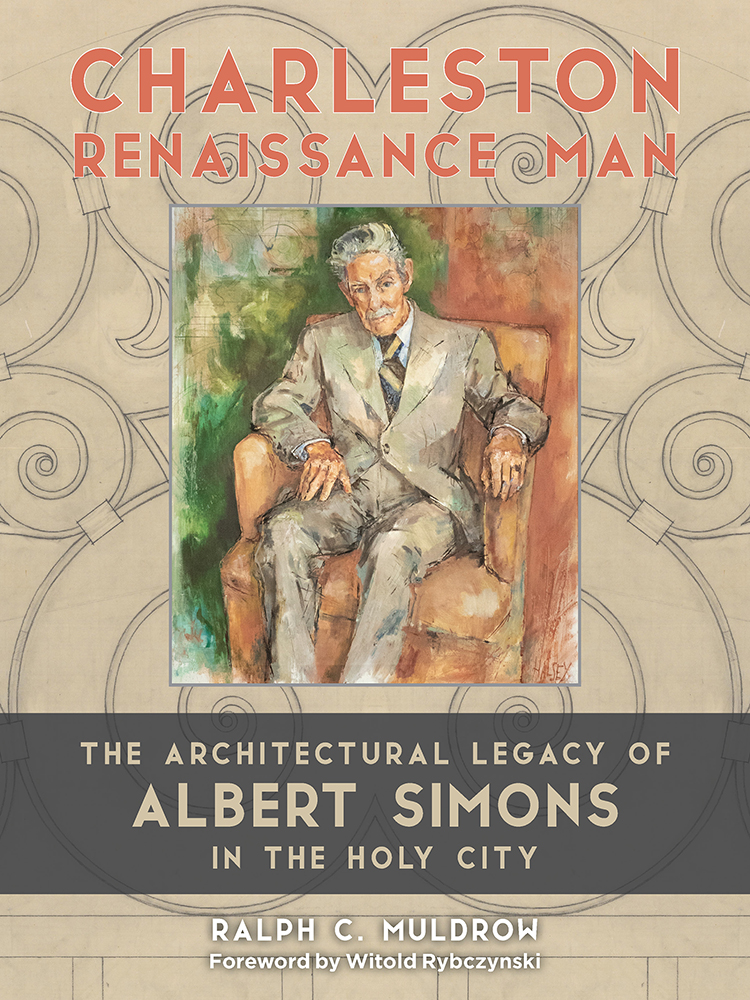 The Architectural Legacy of Albert Simons in the Holy City

A study of the life, work, and extraordinary influence of an innovative architect

Albert Simons came of age during the vibrant years of the Charleston Renaissance in the early twentieth century. His influential social circle included artists, musicians, writers, historians, and preservationists, many supporting the cultural revival that was reshaping the city. Through his architectural design and passion for preservation, Simons contributed tremendously to the cultural environment of the Charleston Renaissance. His work helped to mold the cityscape and set a course that would both preserve the historic South Carolina city and carry it forward, allowing it to become the thriving urban center it is today.

Simons brought both a sense of history and place, born of his deep roots in Charleston, as well as a cosmopolitanism developed during his years of training at the University of Pennsylvania and travels on the European continent. The melding of those sensibilities was a perfect match for the age and made him a true Charleston Renaissance Man. While he preferred the more traditional Beaux-Arts, Classical, and Colonial Revival styles, Simons had the unique ability to balance traditional and modern styles. He believed preservation in Charleston was about retaining the city's architectural heritage but doing so in a way that allowed the city to grow and progress—to be a living city. Looking forward and simultaneously looking back is quintessentially Charleston and a hallmark of Simons's life and work.

Featuring more than 100 color and black and white photographs and illustrations alongside author Ralph Muldrow's compelling storytelling, this fascinating book reveals the deep connection between Simons and the Charleston cityscape. With a foreword by Witold Rybczynski, the award-winning author of numerous books including Charleston Fancy: Little Houses and Big Ideas in the Holy City, Muldrow's Charleston Renaissance Man is a celebration of Charleston's unique architectural character and the architect who embodied the Charleston Renaissance.


Ralph C. Muldrow is the former Simons Professor of Architecture and Preservation and current associate professor of art and architectural history at the College of Charleston.

"Charleston Renaissance Man is an exquisite tribute to the life and career of Architect Albert Simon that reveals the many roles he assumed over his remarkable career. His civic leadership in sympathetic design and continued guidance in historic preservation reveal his deep love and commitment to the Carolina Low Country."—Michael A. Tomlan, Professor and Director, Graduate Program in Historic Preservation Planning, Cornell University

"Ralph Muldrow is a meticulous scholar who has illuminated the complex character of Albert Simons, the work of Simons & Lapham as Charleston's premier architectural firm of the twentieth century, and Mr. Albert's work to further historic preservation and race relations in his native city."—Robert P. Stockton, architectural historian, The College of Charleston

"Charleston Renaissance Man is a book for all lovers of southern architecture, all those interested in historic preservation, and all scholars that treat those topics. While the book is ostensibly a biography of the great Albert Simons, it is also an endearing snapshot of Charleston in the 20th century and the artistic milieu that it occasioned. Every historic home and business in downtown Charleston should own a copy."—Duncan Stroik, AIA, Professor of Architecture, University of Notre Dame

"While Muldrow includes images of exquisite drawings from Albert Simons' office, he has also written a beautiful love letter to the City of Charleston and The Charleston Renaissance. A must read for architects, preservationists, and social historians who will marvel at the vitality of a southern city reconciling the rise of modernism and its impact on the visual culture of this most traditional city."—John Blatteau, AIA, founder and principal of John Blatteau Associates