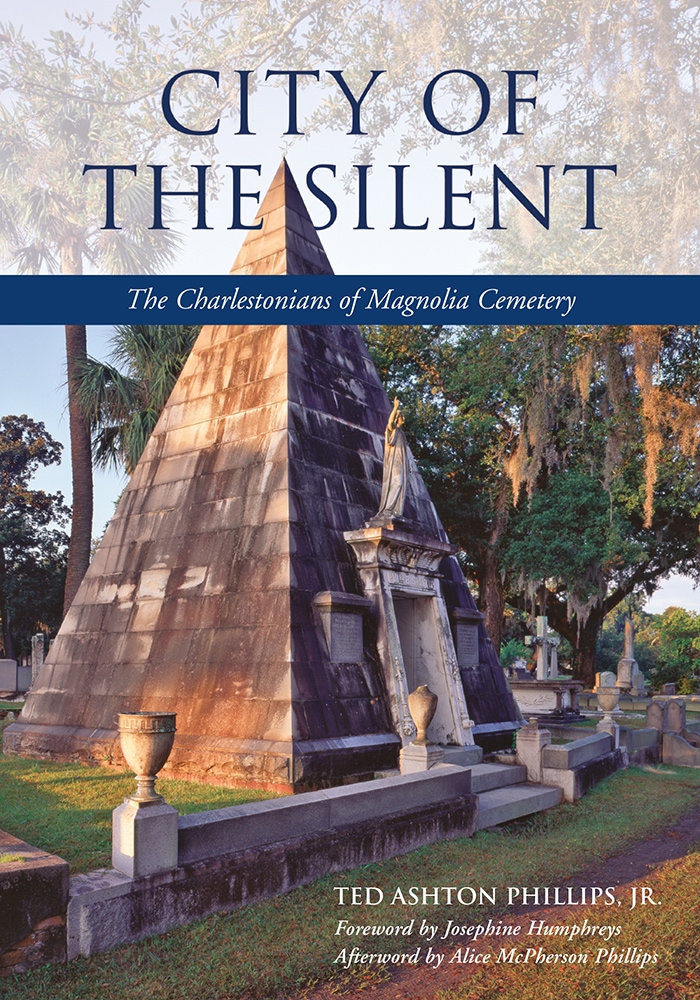 City of the Silent

The Charlestonians of Magnolia Cemetery

Charleston is a city of stories. As in any city of historical significance, some of its best stories now lie buried with its dead. Ted Ashton Phillips, Jr., was custodian of many of the stories of those Charlestonians interred in Magnolia Cemetery, the picturesque burial ground located along the Cooper River north of downtown. Phillips's fascination with Magnolia began at the age of sixteen, when he worked there as a groundskeeper and assistant gravedigger. He followed his passion into the research represented in this collective biography of more than two hundred representative Charlestonians from many eras, now buried among the thirty thousand permanent residents of Magnolia Cemetery.

Taking its title from the poem that William Gilmore Simms delivered at the 1850 consecration of the cemetery, City of the Silent is a unique guide to some of the complex personalities who have contributed to the Holy City's rich culture. The book includes entries on writers, artists, statesmen, educators, religious leaders, scientists, war heroes, financiers, captains of industry, slave traders, socialites, criminals, victims, and others. Some of these men and women are as distinguished as author Josephine Pinckney, civil rights champion J. Waties Waring, and artist Alice Ravenel Huger Smith. Others are as notorious as bootlegger Frank "Rumpty Rattles" Hogan, adulterous killer Dr. Thomas McDow, and brothel-keeper Belle Percival. Most of Phillips's subjects achieved prominence while alive, but a few are better known for their manner of death. The members of the third and final crew of the Confederate submarine H. L. Hunley, interred with great ceremony in 2004 after the discovery of their vessel in Charleston harbor, are among the newest Magnolia residents depicted in the portrait gallery.

Each authoritative profile offers a vivid depiction of a memorable individual rendered in conversational tone with refreshing wit and apt anecdotes. These artfully braided stories describe an intricate network of family ties, civic institutions, business enterprises, and local landmarks. Together the biographies provide an affectionate, insightful history of an influential society and establish Magnolia as a center of community traditions that extend from the mid-nineteenth century to the present. City of the Silent is a celebration of intertwining lives and an engrossing account of Charleston's past as witnessed by those no longer able to tell their own tales.

In addition to the biographical sketches, City of the Silent includes a foreword by Josephine Humphreys, Charleston writer and longtime friend of the author, and an afterword by Phillips's daughter Alice McPherson Phillips. The volume also features an introductory essay by historian Thomas J. Brown examining how the cemetery became a leading site of historical memory in the aftermath of the Civil War, and sets of maps and thematic tours that invite visitors to locate the featured graves within Magnolia's evocative grounds.


Ted Ashton Phillips, Jr. (1959–2005), was a resident and historian of Charleston, South Carolina. A graduate of Harvard University, where he wrote for the Harvard Lampoon, Phillips was a trustee of Magnolia Cemetery, a member of the Brown Fellowship Cemetery Committee, and an officer of the Preservation Society of Charleston. He is interred in Magnolia Cemetery with the subjects of his book.

"Whether you think you know Charleston or you are entirely new to lowcountry lore, Ted Phillips's guide to Magnolia Cemetery is an excellent opportunity to learn more of who-was-who in Charleston's distant and recent past. If history is biography, then these sketches of representative Charlestonians provide a history as rich and varied as any in the South—or on the planet."—William P. Baldwin, author of Mrs. Whaley and Her Charleston Garden and Lowcountry Daytrips

"Ted Phillips's remarkable study of Magnolia Cemetery and the equally remarkable people who are buried there reflects the author's boundless enthusiasm for Charleston, its people, and its history. Ted's work rightly recognizes that Magnolia Cemetery is one of the cultural treasures of Charleston and this book will inspire a deeper appreciation for Magnolia as one of the preeminent sites in our city. Ted Phillips was an amazing Charlestonian who loved this historic city deeply and he deserves to be remembered in the pantheon of remarkable Charleston personages."—The Honorable Joseph P. Riley, Jr., mayor of Charleston

"These brief biographies of writers, artists, politicians, slave traders, criminals, socialites, and others who lie buried in Charleston's huge riverside cemetery come from a man who loved his city, studied its history, and knew many of its secrets. In sketches that range from the serious to the humorous, Ted Phillips has separated the admirable from the villainous, duly acknowledged the dull and dutiful, and had great fun with the shady and scandalous. This is a book not to be read in gulps, but savored in sips."—Jane H. Pease, University of Maine

"This is a gloriously unclassifiable book—with one foot in history and one in literature—that redefines and deepens our understanding of what it has meant to be a Charlestonian. Filled with wit and rueful wisdom, the portraits of the dead in Ted Phillips's City of the Silent speak with an eloquence that recalls Lyton Strachey's Eminent Victorians and Sherwood Anderson's Winesburg, Ohio."—Dale Rosengarten, College of Charleston