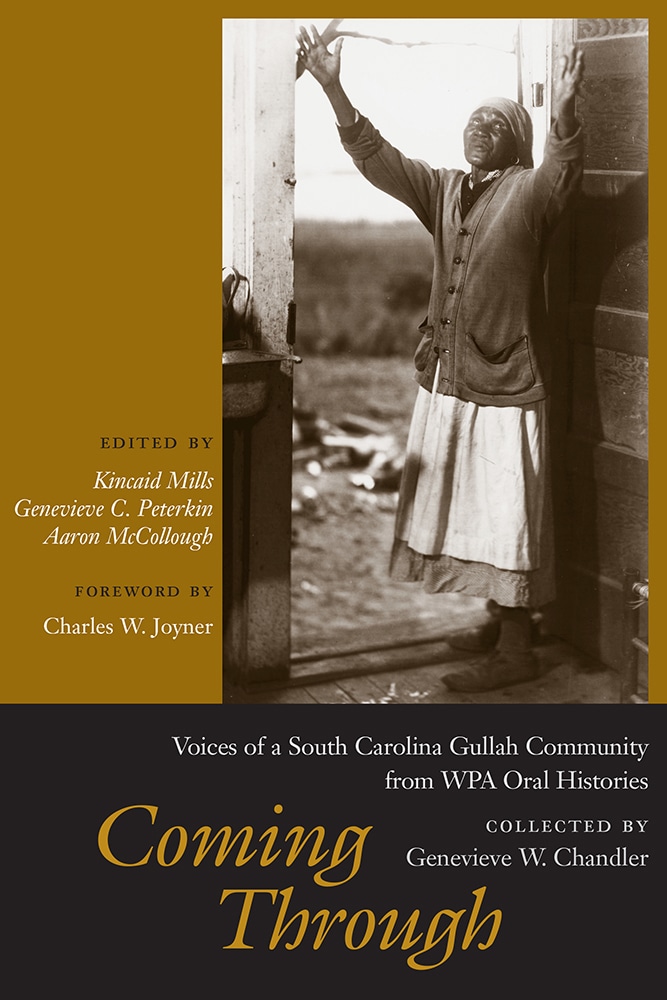 Coming Through marks the first complete publication of these interviews with former slaves and their descendants living in the Waccamaw Neck region of South Carolina as collected by Genevieve W. Chandler as part of the WPA Federal Writers Project. Between 1936 and 1938 Chandler interviewed more than one hundred individuals in and around All Saints Parish, a portion of Horry and Georgetown counties located between the Waccamaw River and the Atlantic Ocean. Her subjects spoke freely with her on topics ranging from slave punishment to folk medicine, from conditions in the Jim Crow South to the exploits of Brer Rabbit.

A teacher, artist, writer, and later museum curator, Chandler had no formal training as an oral historian or folklorist, yet the sophistication of her work as documented here anticipates developments in these fields of study a generation later. Her detailed descriptions add social context to folktales, and her careful and systematic renderings of the Gullah language have since been praised as foundational work by Creole linguists. Chandler's Gullah-speaking African American informants range in age from the 9-year-old George Kato Singleton to 104-year-old Welcome Bees. A biography of each subject accompanies the interviews. Collectively these interviews form an intimate portrait of a fascinating subculture of the Carolina coast and the Sea Islands as shared with a remarkable woman who has special access to converse with the people of this traditionally insular world. Moreover they provide an unparalleled firsthand account of the African American experience in South Carolina in the words of those who lived it.

The volume is edited by Chandler's daughter, Genevieve C. Peterkin, and two scholars, Kincaid Mills and Aaron McCollough. The three have carefully established the texts of the interviews in a manner that highlights Chandler's skills as a field linguist and have supplemented the texts with revealing documentation. The collection is enhanced with a foreword by Charles W. Joyner, Burroughs Distinguished Professor of History at Coastal Carolina University; appendixes respecting the WPA project and the nuances of Gullah language and culture; and photographs of the subjects taken by renowned photographer Bayard Wootten—many published here for the first time.


Genevieve W. Chandler (1890–1980) moved to Murrells Inlet, South Carolina, at the age of ten when her father purchased Wachesaw Plantation and the Hermitage. Her short stories drawn from the folklore of Waccamaw Neck were published in Scribner's, Mademoiselle, and Southwestern Review. From 1938 to 1963 she served as curator of Brookgreen Gardens.

Kincaid Mills is an investment manager, conservationist, and independent scholar living in Lookout Mountain, Georgia. In 2000 he was awarded the Civic Volunteer Award by the Tennessee Department of Environment and Conservation for his work in land conservation

Genevieve C. Peterkin is a local historian and environmental activist in Murrells Inlet. With William P. Baldwin, she is the author of Heaven Is a Beautiful Place: A Memoir of the South Carolina Coast.

Aaron McCollough teaches in the English department at the University of Michigan and is the author of three books of poetry, most recently Little Ease.

"It's no stretch to compare Genevieve Chandler with William Faulkner, for both writers present us with entire worlds, complex flesh and blood worlds where the simple virtues of honesty, courage, and generosity not only endure but triumph. This oral history collection is a treasure."—William P. Baldwin, author of The Hard to Catch Mercy and Lowcountry Plantations Today

"The past, as Faulkner reminded us long ago, is never dead; it isn't even past. In this landmark work, Kincaid Mills, Genevieve C. Peterkin and Aaron McCullough have recovered the long-forgotten voices of former slaves and their descendants. First collected by Genevieve W. Chandler during the New Deal, these interviews shed light on a world that is at once distant and all too near. Coming Through reminds us anew of the great American tragedy of slavery and of its long, grim shadow of segregation. But it is a reminder, too, of the indomitability of the spirit of those who endured the seemingly unendurable, and lived to tell the tale. This is an important and seminal work."—Jon Meacham, editor of Newsweek and author of American Gospel: God, the Founding Fathers, and the Making of a Nation

"The speakers of the individual sections are story-tellers, and we receive their information as though we were listening to their stories. Coming Through comes much closer than the recordings of Gullah speech and song from this period I have heard to capturing what these people, so oppressed by poverty and ignorance, so isolated yet so proud of their traditions, must actually have sounded like. That this book exists at all is a marvel of meticulous and patient scholarship. I hope that many will indeed receive the wisdom, humor, beauty and inspiration of this book . . . . Coming Through speaks more eloquently to the true condition of black people in the Lowcountry between the War and the Second World War than any other book I have read. This is a book for 'dipping,' like a collection of short stories in which one may comfortably read an offering at a single sitting."—Charleston Mercury