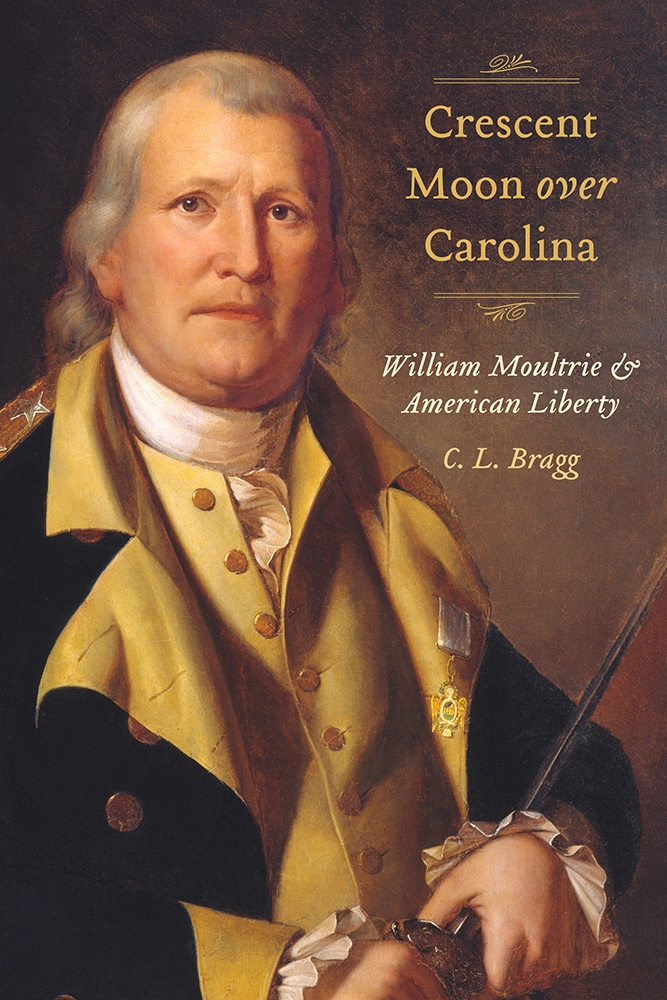 Crescent Moon over Carolina examines the life of Major General William Moultrie (1730-1805) who is best remembered for his valiant defense of an unfinished log fort on Sullivan's Island at the entrance to Charleston harbor against a determined British naval attack on June 28, 1776. While the Continental Congress in Philadelphia considered a draft of the Declaration of Independence, Moultrie and his garrison of South Carolinians proved that untested, but courageous, American soldiers could stand firm and prevail against British might.

Every fort that has since occupied the site has borne his name, but Moultrie was more than the iconic defender of Charleston. Postwar he served two terms as governor and became one of South Carolina's most influential elder statesmen during the early years of the American Republic.

In this first and only book-length biography of William Moultrie, C. L. Bragg combines a scholarly survey of lowcountry South Carolina culture, the American Revolution, and the early political history of the state and the United States. Bragg also brings to light primary sources that are published here for the first time—revealing documents that provide fresh insight into the political and cultural values of Moultrie and his fellow South Carolinians.

Crescent Moon over Carolina offers engaging narrative, detailed maps, and beautiful illustrations that will stand as an important addition to the body of literature for those interested in Revolutionary South Carolina. Bragg leaves us with a clearer understanding of Moultrie—a political and military leader who counted among his friends, associates, and correspondents many of our nation's ardent patriots and founding fathers. Moultrie's service to state and country has earned him a respected place in history.


C. L. Bragg is the author of Distinction in Every Service: Brigadier General Marcellus A. Stovall, C.S.A. and coauthor of the critically acclaimed Never for Want of Powder: The Confederate Powder Works in Augusta, Georgia, also published by the University of South Carolina Press. Bragg's interest in William Moultrie was sparked while researching his family's South Carolina heritage and his personal connection to the Revolutionary War.

"Carefully researched and written, Crescent Moon over Carolina is recommended for both undergraduate and graduate students of southern history."—Michael P. Morris, The Journal of Southern History

"This biography of Moultrie is certainly needed. It will become the standard reference for any researcher interested in virtually any aspect of Moultrie's life and career . . ."—South Carolina Historical Magazine

"Crescent Moon over Carolina offers an engaging narrative, detailed maps and beautiful illustrations that will stand as an important addition to the body of literature for those interested in Revolutionary SC."—Lowcountry Companion

"Bragg offers a rich narrative into the day-to-day activities of Moultrie leading up to the battle, and covers other military events in the South in detail."—J. Mercantini, Choice Magazine

"C.L. Bragg provides the most in-depth examination to date of the life of William Moultrie. His highly readable prose is supported by deep, scholarly research that reveals both the public and private life of Moultrie, who played a critical role in both the Revolutionary War and the history of the early Republic."—David K. Wilson, author of The Southern Strategy: Britain's Conquest of South Carolina and Georgia, 1775-1780.

"Crescent Moon over Carolina is the saga of a man who was the very epitome of a statesman: a man of principle, integrity, and courage—in public office, in civic affairs, in uniform, and in private life. In this first-ever biography of William Moultrie, C. L. Bragg has eloquently captured the man and his times."—Walter Edgar, author of South Carolina: A History

"C.L. Bragg's Crescent Moon over Carolina is a welcome and refreshing look at one of South Carolina's traditional heroes. An excellent addition to the history and biography of the Revolutionary War, Bragg's work provides a thoroughly researched, new perspective on both the triumphs and tragedies of Moultrie's military career and private life."—Carl P. Borick, author of A Gallant Defense: The Siege of Charleston, 1780, and Relieve Us of This Burthen: American Prisoners of War in the Revolutionary South, 1780-1782