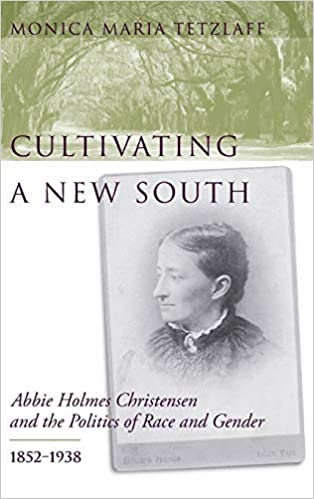 Abbie Holmes Christensen and the Politics of Race and Gender, 1852-1938

The story of a Yankee reformer and her life in Beaufort County, South Carolina

Born into a Massachusetts abolitionist family, Abbie Holmes Christensen (1852-1938) epitomized the Yankee reformer spirit of the nineteenth century. Well educated and passionate about human rights, she moved to Beaufort, South Carolina, with her parents in 1864 as part of the Port Royal Experiment. In 1870, as a teenager, she began teaching black students. During her life she labored to educate South Carolina's African Americans, fought for women's equal participation in politics, and eventually took a role in the Socialist Party of America. Monica Maria Tetzlaff's biography of this activist reformer reveals not only the life of an intriguing individual, but also the history of the Sea Islands of South Carolina during a neglected era—from Reconstruction to the New Deal.

Tetzlaff chronicles Abbie Holmes's education at Mount Holyoke College, her return to Beaufort, and her marriage in 1875 to Niels Christensen, a Danish immigrant and former captain of "Colored Troops" in the Union army. Tetzlaff depicts the intensity of Christensen's private and public life as the mother of six children and as a tireless reformer engaged in temperance and women's suffrage movements. Together with black South Carolinians, Christensen did pioneering work as a Gullah folklorist, and established an African American agricultural school and hospital. In cooperation with white southern women, she promoted the conservation of wildlife, and the greening of town spaces.

As Tetzlaff recounts an uncommon life story, she also sheds light on the time and place in which Christensen worked. Through Christensen's biography, Tetzlaff illumines the collapse, recovery, and second collapse of agriculture in South Carolina's lowcountry, African Americans' brief equality and second subjugation under the forces of Jim Crow, and the transformation of Beaufort County by industry, migration, and national politics.


Monica Maria Tetzlaff is an assistant professor of history at Indiana University South Bend. She holds a Ph.D. from the University of Pennsylvania and a B.A. from the College of William and Mary. She lives in South Bend.

"Thanks to Monica Maria Tetzlaff, we now have a clearly written, well documented, and generously illustrated biography of Abbie Holmes Christensen, pioneer collector of African American folklore and champion of social reform. Cultivating a New South will be an eye-opener for anyone wishing to understand the relationships among race, gender, politics, and folk culture in the crucial years of the New South."—Charles Joyner, author of Down by the Riverside

"A significant contribution to southern women's history that offers fresh insights into race relations, reform, and 'woman's place' in the New South, Monica Maria Tetzlaff's gracefully written, meticulously researched book exemplifies biography at its best. Abbie Holmes Christensen challenged the racial and gender conventions of her own time, and her life story compels historians to rethink our assumptions about white southern female reformers."—Anastatia Sims, author of The Power of Femininity in the New South