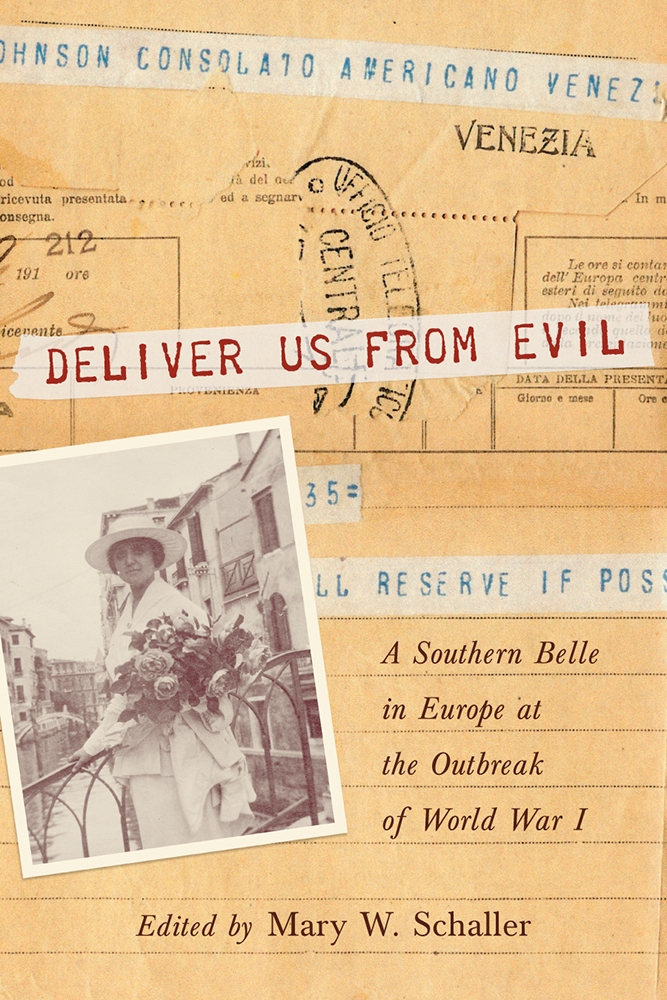 Deliver Us from Evil

On August 1, 1914, as the Great War erupted in Europe and financial and physical resources were realigned toward the war effort, some 120,000 American travelers scattered across the Continent suddenly found themselves in the midst of a vast warzone without means of escape. Among the stranded Americans was twenty-five-year-old Nancy Johnson, the daughter of influential U.S. Congressman Ben Johnson of Kentucky. Using Nancy Johnson's letters and photographs, her granddaughter Mary W. Schaller recounts the harrowing chronicle of Johnson's flight from war-torn Europe.

A native of Bardstown, Kentucky, Johnson (1890-1982) had grown weary of five consecutive seasons of the Washington, D.C., social scene in her father's shadow. In May 1914 she opted to undertake a modern Grand Tour of Europe with her friend Ethel Norris. Armed with letters of introduction written by President Woodrow Wilson, Johnson and Norris anticipated lavish travels through Europe. The duo was in Switzerland en route from Venice to Paris when they learned of the German declaration of war on Russia. With civilian train service to Paris cancelled, Johnson and Norris retreated to Venice, where Johnson discovered that she could no longer cash checks at the Italian banks. The young women struggled to reach Genoa, where a group of wealthy American travelers, including Frederick Vanderbilt, were chartering ships for their fellow citizens.

Johnson and Norris were among the elite four hundred passengers on the first ship to leave Genoa, but the two-week voyage home proved to be as tension-filled as the flight that came before it. Their vessel was repeatedly stopped by British warships and had to evade attack by German submarines. Despite her trials Johnson returned safely to Washington in late August.


A native of Washington, D.C., Mary W. Schaller is the award-winning author and editor of sixteen books and plays, including Soldiering for Glory: The Civil War Letters of Colonel Frank Schaller, Twenty-second Mississippi Infantry. Schaller's books have collectively sold more than one million copies worldwide and several have been translated into other languages. She lives in Burke, Virginia, with her husband, Martin.