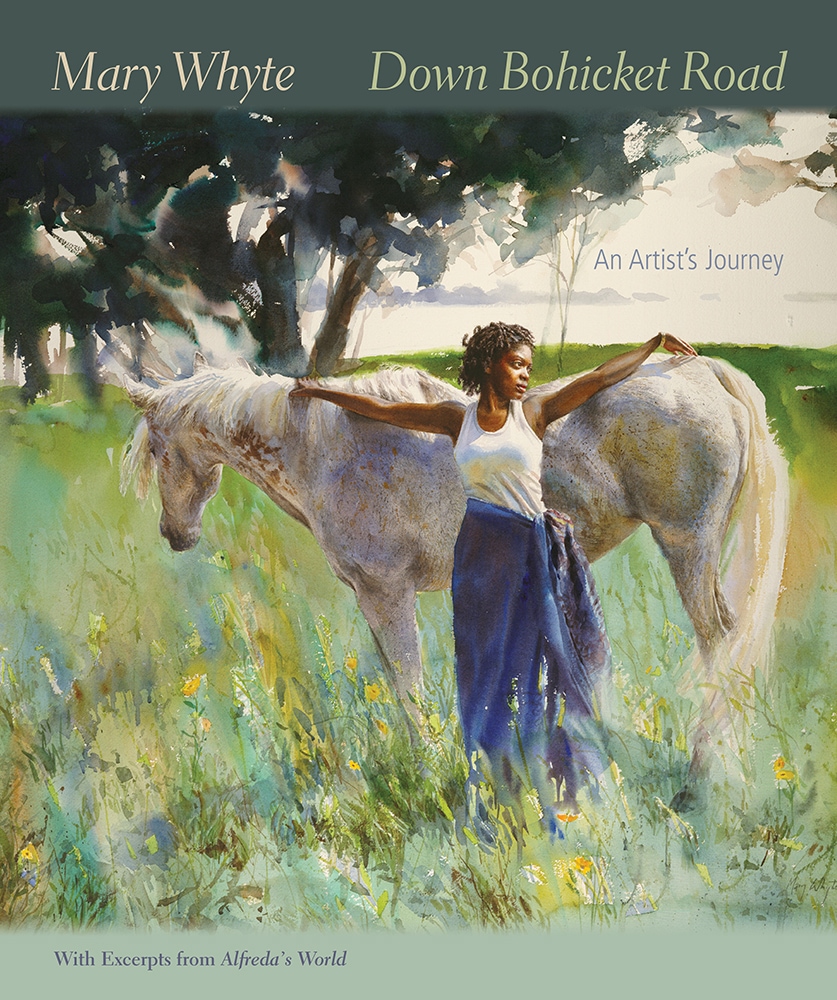 An Artist's Journey. Paintings and Sketches by Mary Whyte, With Excerpts from Alfreda's World.

Artist Mary Whyte's Down Bohicket Road includes two decades worth of watercolors—depicting a select group of Gullah women of Johns Island, South Carolina, and their stories. In 1991, following Whyte's recovery from a year of treatment for cancer, she and her husband moved to a small sea island near Charleston, seeking a new home where they could reinvent themselves far removed from the hectic pace of Philadelphia. In this remote corner of the South, Whyte first met Alfreda LaBoard and her devoted group of seniors who gathered weekly to make quilts, study the Bible, and socialize in a small rural church on Bohicket Road. Descendants of lowcountry slaves, these longtime residents of the island influenced Whyte's life and art in astonishing and unexpected ways.

Whyte soon began a series of watercolors depicting these women, honoring their lives and their dedication to family and faith. As her friendships with these women grew, their matriarch Alfreda LaBoard claimed Whyte as her "vanilla sister." Alfreda's World, a collection of Whyte's detailed watercolors and poignant recollections of the women at the senior center, was published a decade later, drawing attention and support from the community to the small church on Bohicket Road.

Down Bohicket Road continues the story of Whyte's relationship with these extraordinary women, following the passing of Alfreda, against the backdrop of the ongoing commercial development of Johns Island. For Whyte, the heart of this community remains in the simple homes clustered along Bohicket Road, in the island's winding tidal creeks, and in a small church where eighteen hardscrabble women gather in fellowship each week. In her book Whyte illustrates that both watercolors and friendships can be the unpredictable results of an abundance of blessings. As shared through touching words and vibrant paintings, Down Bohicket Road celebrates a unique way of coastal life and a remarkable friendship that transcends all barriers—even death itself—in praise of the unifying power of art.

All royalties from the sale of this book benefit the Hebron Saint Francis Senior Center on Johns Island.


Watercolor artist Mary Whyte is a teacher and author whose figurative paintings have earned national recognition. Her portraits are included in numerous corporate, private, and university collections, as well as in the permanent collections of South Carolina's Greenville County Museum of Art and the Gibbes Museum of Art in Charleston. Whyte's work has been featured in International Artist, Artist, American Artist, Watercolor, American Art Collector, L'Art de l'Aquarelle, and numerous other publications. Whyte is the author of Working South: Paintings and Sketches by Mary Whyte, Painting Portraits and Figures in Watercolor, An Artist's Way of Seeing, and Watercolor for the Serious Beginner. Her work can be found at Coleman Fine Art in Charleston.

"The extraordinary work of Mary Whyte, who could easily be named the first visual poet laureate of South Carolina, is astonishing on the very face of it. When I grew up in Beaufort, South Carolina, Ruby Ellis Hryharrow, a friend's mother, was known as the best watercolorist in town. The artists of those early times formed a club of their own, but Mary Whyte's work is in a league of her own. She is painting a South Carolina I thought only a poet or novelist could create. Mary Whyte has made South Carolina a kingdom of her own, and my God, this woman can write and paint."—Pat Conroy, southern writer

"From the quilters at the Hebron St. Francis Senior Center on Johns Island to political leaders and professional luminaries, Whyte lovingly paints her figures as if they were all her close personal friends. Like that of her predecessor Henrietta Johnston, Whyte's work is highly prized by private collectors and museums across the country. Both artists were looking for fresh starts when they moved to Charleston, and instead they found their artistic souls."—Angela Mack, from the foreword

"Through patience and persistence, the phenomenal paintings of Mary Whyte magnificently capture the living Gullah heritage and culture of rural life that perseveres among the Sea Islands and marshlands of the South Carolina lowcountry. Using her skills in the arts of listening, acceptance, and presence, Whyte shares customs and traditions of community, foodways, music, and spirituality that have survived and evolved for two centuries. Whyte's paintings are accompanied with exquisite, reverent narratives as powerful and timeless as the rows of ancient oaks that line and shelter Bohicket Road."—Jonathan Green, southern artist

"A captivating portrait of women living in the countryside near Charleston, S.C., delivered in words and images by artist and author Whyte (Alfreda's World). After the author survived cancer and the failure of her Philadelphia art gallery, she moved to South Carolina and was drawn to the area's unusual Gullah culture. Her images evoke the vibrant personalities of Gullah women, impressing upon the reader the virtues of rural life in a world that values speed, noise, and technology. Whyte describes her own upbringing in a racist household in Ohio, contrasting that with her subjects' power, generosity, and kindness, captured in words and paintings. Whyte's simple narratives and delicate visual style bring these women to life, serving as reminders of the power of friendship and love and the value of faith and hard work."—Publishers Weekly