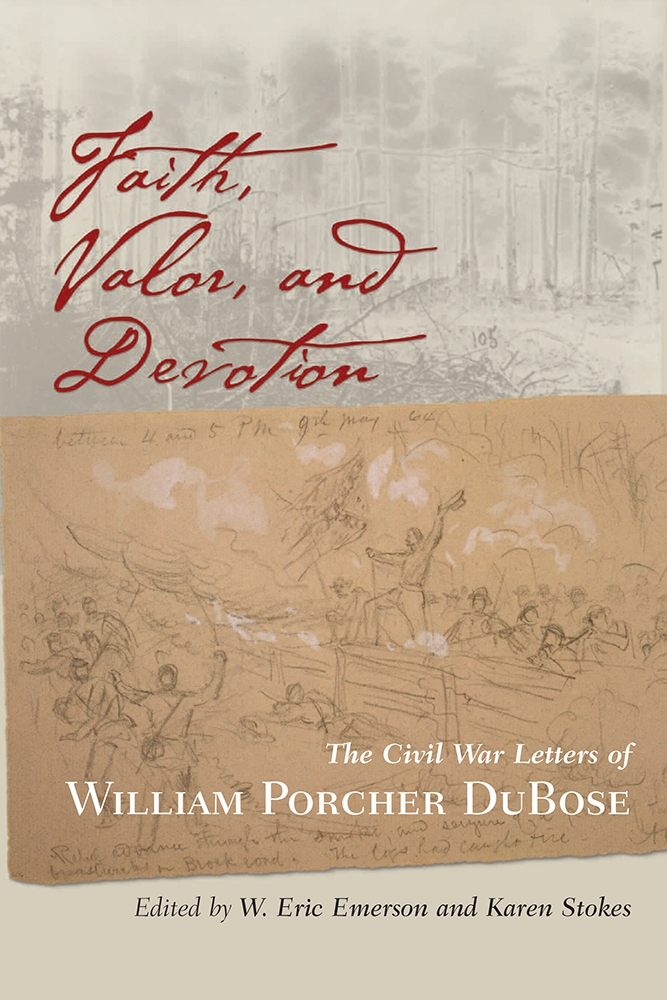 Brilliant and devout, William Porcher DuBose (1836-1918) considered himself a man of thought rather than of action. During the Civil War, he discovered that he was both, distinguishing himself as an able and courageous Confederate officer in the Holcombe Legion and later as a dedicated chaplain in Kershaw's Brigade. Published for the first time, these previously unknown letters of DuBose chronicle his Civil War actions with these two celebrated South Carolina units and make an important contribution to the literature and history of the war. They also advance our understanding of DuBose's burgeoning religious ideals as a Civil War combatant who would later become one of the foremost theologians of the Episcopal Church and a distinguished professor at the University of the South.

A native of Winnsboro, South Carolina, DuBose was studying to enter the Episcopal priesthood when the war began. After struggling with the question of secular and spiritual obligations, he decided to join in the defense of the Confederacy and began a long and varied career as a soldier. After service in the lowcountry during the first year of the war, he was thrust into the thick of combat in Virginia, where he was wounded twice and taken as a prisoner of war. After being exchanged and returned to duty in 1862, DuBose was wounded again at the battle of Kinston in North Carolina, and a year later influential friends arranged for his appointment as chaplain in Kershaw's Brigade. He continued to share in the hazards of combat with the men to whom he ministered as they fought in the battles of Spotsylvania, Cold Harbor, Petersburg, and Cedar Creek in 1864.

Adroitly edited by W. Eric Emerson and Karen Stokes, the more than 150 letters collected here prove DuBose to be a man of uncompromising duty to his faith, fellows, and the Confederate cause. He references his interactions with prominent figures of the day, including General Nathan "Shanks" Evans, John L. Girardeau, John Johnson, Colonel Peter F. Stevens, General Joseph B. Kershaw, Louisa Cheves McCord, and General John Bratton. Also included here are DuBose's wartime courtship letters to his fiancée and later wife, Anne Peronneau DuBose. Collectively these extraordinary documents illustrate the workings of a mind and heart devoted to his religion and dedicated to service in the Confederate ranks.

Karen Stokes is an archivist with the South Carolina Historical Society in Charleston. Her articles on South Carolina history have appeared in numerous newspapers and journals.

"The nineteenth century was the great age of letter writing, and there is no better guide to how life was lived by the people of that time than their letters. This is eminently true of William Porcher DuBose, a young seminarian, who served unflinchingly as a combat officer and chaplain in the Confederate army from the beginning to the end and later became a highly regarded theologian. These letters, skillfully transcribed, introduced, and annotated, give a rich picture of what 'faith, valor, and devotion' meant to the South Carolinians who steadfastly endured as great a sacrifice and suffering as any large group of Americans ever have."—Clyde N. Wilson, emeritus distinguished professor of history, University of South Carolina

"This edition of the wartime letters of the man who was to become the leading theologian of the Episcopal church records in detail his progress from seminarian to adjutant in Holcombe's Legion, to deacon in the church, to chaplain in the legion. In an impressive editorial collaboration, Emerson and Stokes bring a perfect combination of skill in military analysis and an intimate knowledge of family interconnectivity in South Carolina. Though the letters are often intensely personal—from love-struck bachelor and later devoted husband—they also record daily camp life as well as the legion's engagements in many battles. The introduction provides an excellent background for the man and his letters, and the richly informative endnotes offer supplemental records of battles, troop movements, and family reunions."—George W. Williams, author of St. Michael's, Charleston, 1751–1951, and professor emeritus of English, Duke University