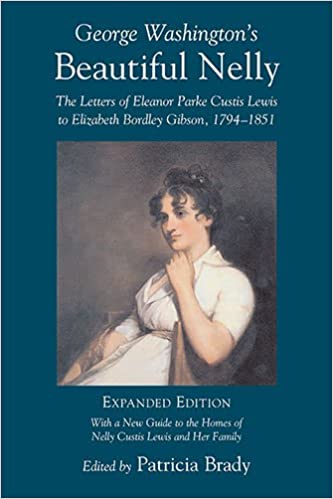 Eleanor Parke Custis Lewis (1779-1852) was in many ways the quintessential southern lady, but as Martha Washington's granddaughter by her first marriage and George Washington's adopted daughter, she was also something of an American celebrity. Her lifelong correspondence with childhood friend Elizabeth Bordley Gibson records the experiences of the first family, the social and political gossip of the new republic's elite circle, and the difficulties of motherhood and marriage. Edited by Patricia Brady, the voluminous and unguarded letters also reveals the complex cast of family and friends associated with the Washington household, the details of plantation life, and the social limitations placed on even the most privileged eighteenth- and nineteenth-century women. This edition features an updated introduction from Brady.

Patricia Brady is author of Martha Washington: An American Life and editor of Nelly Custis Lewis's Housekeeping Book and Encyclopaedia of New Orleans Artists, 1718–1918. Brady holds a Ph.D. in history from Tulane University and served for twenty years as director of publications at the Historic New Orleans Collection. She lives in New Orleans.

"This collection of intimate, chatty letters from Washington's adopted daughter to her lifelong friend in Philadelphia charts the narrowing compass of her life, from youthful exuberance as the darling of the president's family and a well-educated observer of public life to an embittered wife of an unambitious, aloof husband. . . . Revealing much about the daily concerns of a Southern woman over a lifetime, these letters remind us that, even as the nation was coming apart, the private worlds of women (and men) were held together by family, faith, and friendships."—Library Journal

"In Nelly's letters can be traced the passage of a Virginia belle of unique privilege into a mature woman who had a share of unhappiness in the premature death of her children and other family members. The letters are expressive; Nelly is forthright in her attitudes about the evils of slavery, the need for culture, the frustrations of societal expectations for women."—Publishers Weekly

"A fascinating window into Nelly's life and times."—Journal of American History