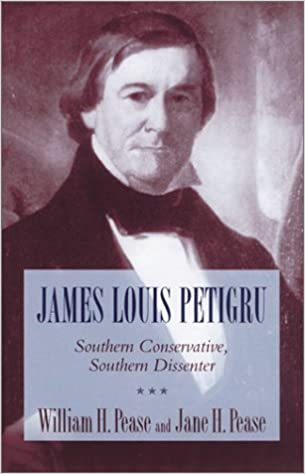 In the three decades before the Civil War, James Louis Petigru became the dean of the South Carolina bar and Charleston's leading exponent of the constitutional conservatism that placed federal union above state rights, the economic views that underlay Whig politics, and the liberal vision of individual rights enshrined in the Bill of Rights. In the only modern biography of Petigru, William H. and Jane H. Pease trace the rise to social and professional preeminence that not only placed him among South Carolina's elite but also gave him national visibility. In doing so, they explore the workings of the extended family he headed, the politics of the state he loved, and the intricacies of the legal system he mastered.

Central to Petigru's life was the ambiguity into which his competing loyalties plunged him. Loyal to his native state, he was a vocal opponent of its political values. Despite his dissent on the critical issues of nullification and secession, Petigru was elected attorney general, served as a state representative, and codified the state's laws. Born in South Carolina's upcountry to a family of Scots-Irish and Huguenot ancestry, Petrigru achieved such high distinction as an attorney and politician that both Confederates and Yankees eulogized him when he died in Charleston in 1863. Throughout his career, his espousal of private property, individual liberty, the rule of law, and the United States Constitution remained unflinching and gave Petigru the wisdom and assurance to be the state's most notable dissenter.


William H. Pease and Jane H. Pease are professors emeriti at the University of Maine and associates in history at the College of Charleston in South Carolina. They are the authors and editors of ten books, including A Family of Women: The Carolina Petigrus in Peace and War and The Web of Progress: Private Values and Public Styles in Boston and Charleston, 1828–1843. The Peases divide their time between Chapel Hill, North Carolina, and Harborside, Maine.

"a lively and carefully researched biography of the most prominent attorney in antebellum South Carolina."—Journal of the Early Republic

"a capable, balanced biography of a talented man who stuck by core beliefs when political apostasy was routine."—South Carolina Historical Magazine

"a well-researched and well-written overview of Petigru's life and thought."—The Journal of Southern History