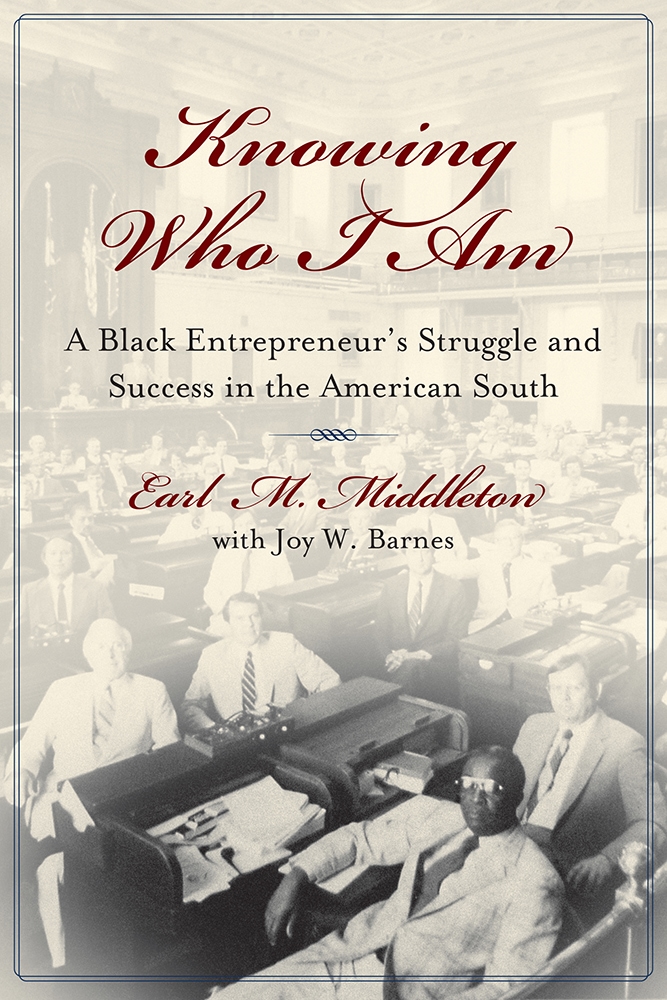 Knowing Who I Am

A third-generation native of Orangeburg, South Carolina, Earl M. Middleton has prospered in ways few African Americans have in the rural South. As owner of a successful business that cuts across racial lines and as a political leader in the cause of civil rights, Middleton has garnered hard-won recognition for his efforts from blacks and whites alike. His life story is at once illustrative of dynamic developments in Southern race relations over the past eight decades and inspirational in telling how one individual capitalized on those changes to perpetuate a family legacy of entrepreneurship and service in his community.

Born in 1919, Middleton is the youngest of six children. His father was a carpenter, and his mother was in one of the first graduating classes of what is now South Carolina State University. Middleton himself graduated from Clafin College, Orangeburg's predominantly black Methodist school, where his studies of sociology became the basis of his knack for understanding and communicating with different communities.

A veteran of World War II, Middleton was trained as a Tuskegee Airman in 1942 and then served as an infantry soldier in the Pacific theater. Returning to Orangeburg in 1946, he became a barber and then a restaurant owner before finding his true vocation as a real-estate and insurance salesman. What is now one of the largest and most profitable real-estate firms in Orangeburg began as a sideline in the back of a barbershop, but Middleton quickly developed a reputation for superior knowledge and service.

But his success did not come without adversity. As a civil rights activist in the turbulent 1950s and 1960s, Middleton witnessed firsthand the bravery and tragedy of Orangeburg's citizens. He was a leader in South Carolina's Republican Party, but along with many black Republicans, he switched to the Democratic Party in 1960. Middleton participated in sit-ins and signed a petition to send his daughter to an all-white school. His wife, then the head of South Carolina State's library science department, was jailed for joining a student protest. From these experiences Middleton developed an unconquerable forbearance that complemented his unshakable belief in equality. In 1974 he was among the first wave of twentieth-century African Americans to be elected to the South Carolina General Assembly, where he served for a decade. There he was a founding member of the Legislative Black Caucus and an influential voice on the U.S. Civil Rights Commission.

Today Orangeburg is a community that values growth, as evidenced by the rising number of new arrivals and returning populations. At the center of this new age is Earl Middleton, a man for whom appreciation of the past and investment in the present have always been good for business.


Earl M. Middleton was the founder and owner of Coldwell Banker Middleton and Associates, one of the largest real-estate brokerages in Orangeburg, South Carolina. He has been profiled in the Wall Street Journal and honored by numerous state and civic organizations. He and his wife, Bernice, were married for sixty year and had three children.

A graduate of Clemson University, Joy W. Barnes has worked at the Middleton companies since 1972.

"Earl Middleton presents a fascinating and moving memoir with very human life lessons to be passed on to succeeding generations. Middleton's inspirational autobiography chronicles the importance of community, education, and strength of mind. Shining throughout his life, and instrumental in his emotional reactions to prejudice and discrimination, was his sense of self-worth—of knowing who he was. Middleton's story is populated with heroes both black and white, people who stepped up with daring audacity to do the right thing. Clearly written with precision, intelligence, and heart, this is an absorbing account of courage and determination."—Orville Vernon Burton, University Distinguished Teacher/Scholar, University of Illinois at Urbana-Champaign

"Earl Middleton's life and career demonstrates that individuals may be shaped by their circumstances, but are not necessarily controlled by them. Possessing a strong sense of self and community, Middleton used both to become an outstanding businessman and leader. Knowing Who I Am serves as a valuable resource for scholars of African American entrepreneurship and political history."—Journal of African American History

"His vision and accomplishments make this book required reading for every person interested in mid-twentieth-century life in the segregated South."—Journal of Southern History