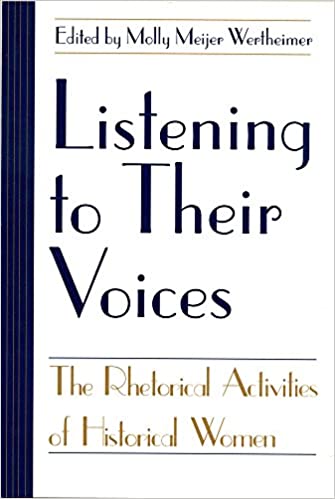 Listening to Their Voices

The Rhetorical Activities of Historical Women

Fresh interpretations of women's speaking and writing throughout western history

In her introduction Molly Meijer Wertheimer traces the patriarchal nature of traditional rhetorical histories as well as the continuing debate about how best to write women into rhetoric's historical record. The volume's essays advance rhetorical theory by examining exceptional women rhetoricians and their unusual rhetorical practices and strategies. Covering a diverse range of rhetorical pursuits and historical eras, the selections look closely at such fascinating topics as the bold speech of ancient Egyptian women, the rhetorical genres of mother's manuals and women's commercial writings in the Middle Ages, the sexual stereotyping of prose style in rhetorical theory of the Enlightenment, and exhortations for racial uplift by nineteenth-century African American women.

"This remarkable collection is like a searchlight, sharply bringing into view the lives and careers of women rhetors otherwise hidden away from us. The essays focus on their skillful achievements in the face of obstacles. The result is an expanded view of rhetoric and its powers."—James J. Murphy, University of California, Davis