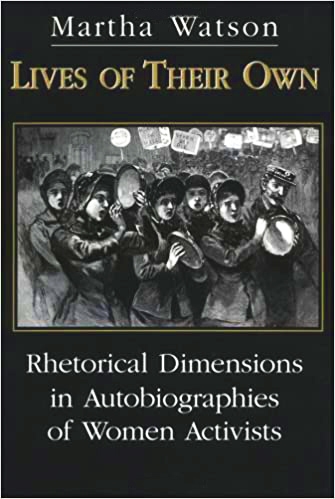 Lives of Their Own

How five exceptional turn-of-the-century women crafted autobiographies that became compelling, persuasive models for their cause and for other women

Lives of Their Own explores how five exceptional turn-of-the-century women crafted autobiographies that became compelling, persuasive models for the women of their generation. Although Frances Willard, Anna Howard Shaw, Elizabeth Cady Stanton, Emma Goldman, and Mary Church Terrell were not among the first women to cut a path into the mainstream of American life or the only women of their era to lead movements for social change, they were among the first to publish narratives of their lives. Martha Watson provides glimpses not only of the women themselves but also of the autobiographical genre as a dimension of public rhetorical discourse.

Watson examines the experiences that motivated these "new women" to break social and rhetorical barriers in writing their life stories, the impact of their activism and public reputations on the autobiographies, and the readership-both supportive and skeptical-for their works. Linking the autobiographies to the development of a feminine consciousness, she suggests that the activists used the writings to assert themselves as women and to articulate a model of selfhood for others to emulate.

In addition, Watson looks closely at the autobiographies as extensions of public advocacy that complemented the more explicitly agitative and argumentative discourse of these women on behalf of their respective causes. She examines how they defended their ideological commitments, dealt with the sometimes competing goals of championing a movement and writing a compelling narrative, and negotiated the boundaries of "womanliness" in their efforts to garner support for their convictions.


Martha Watson is dean of the Greenspun College of Urban Affairs at the University of Nevada, Las Vegas. Prior to joining the UNLV faculty in 1997, she was a professor of speech communication at the University of Maryland at College Park. A former editor of the Quarterly Journal of Speech, Watson has written or edited three books about nineteenth-century women, including A Voice of Their Own: The Woman Suffrage Press, 1845–1910.

"To my knowledge, there is no other book quite like this. It cuts new ground in advancing 'activist autobiography' as a rhetorical genre as documents that need to be studied in the history of the women's movement. Lives of Their Own will contribute to scholarship in the history/criticism of American public address, feminist literature, and the rhetoric of historical/social movements. It also promises to add to genre theory in literary and rhetorical criticism."—Walter R. Fisher, University of Southern California

"The examination of these turn-of-the-century autobiographies as a rhetorical genre breaks new ground for the complexities it reveals about women's works. Recommended for libraries serving undergraduates and graduate students in many disciplines."—Choice

"Martha Watson has put together a masterful study using a mixture of rhetorical and literary theories to argue that women's personal historical narratives can be persuasive."—Journal of Communication Studies

"Lives of Their Own is a persuasive work of rhetorical criticism that presents the autobiographies of five activist as forms of public discourse shaped by particular historical moments and rhetorical situations."—Biography