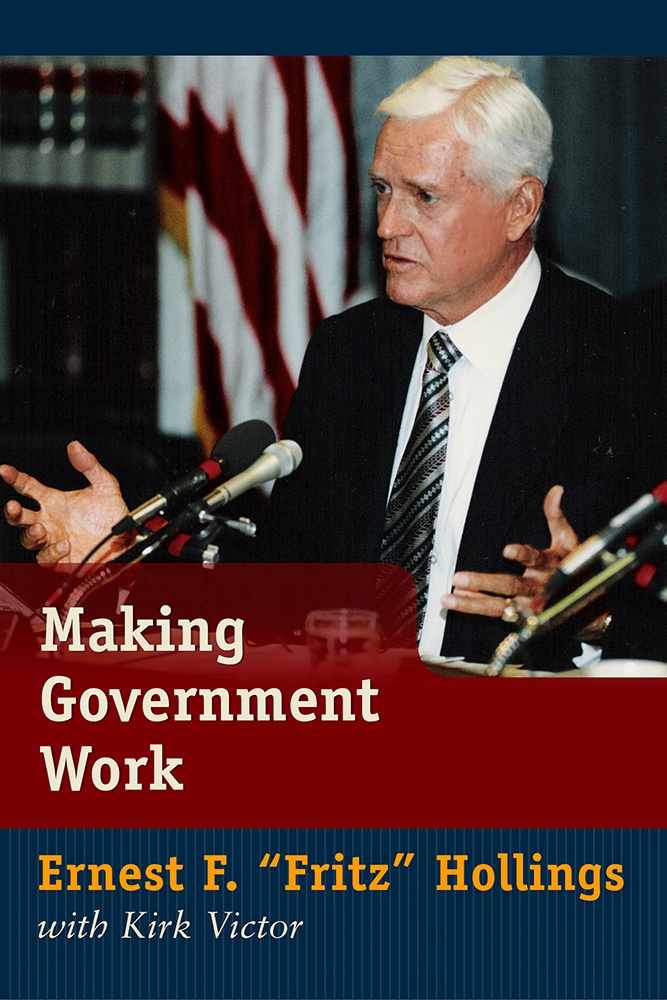 Lessons from a Life in Politics

"Performance is better than promise" has long been the motto of Ernest F. "Fritz" Hollings, a former Governor of South Carolina and six-term U.S. Senator whose distinguished political career speaks volumes about the potential of the elected and the electorate to use government for the good of all. Making Government Work serves as equal parts political memoir and reform-minded call to action as Hollings shares compelling—and often candidly colorful—accounts from his half century of public service to illustrate the smart stewardship of resources and authority needed to enact policies that can make positive differences in the lives of Americans.

Hollings lays out clearly his deep commitment to improving our system of government, strengthening regulations on free trade, countering dependence on campaign contributions, and enhancing our communications and education programs to compete better in an information-driven global marketplace. This prescriptive compendium of sound thinking seeks to reinvigorate a floundering system and to call good people and good ideas back into the service of America's bright future.

Ernest F. "Fritz" Hollings has enjoyed a remarkable career in public service as a South Carolina legislator (1949–1954), Lieutenant Governor (1955–1959), Governor (1959–1963), U.S. Senator (1966–2005), and U.S. presidential candidate (1983–1984). A visionary workhorse, Hollings has focused throughout his career on putting government on a sound financial basis and promoting economic development to create opportunities. Recognized as a policy expert on the budget, telecommunications, the environment, defense, trade, and space, he is the author of the Coastal Zone Management Act (1972), the Ocean Dumping Act (1972), and the Automobile Fuel Economy Act (1975) and coauthor of the Gramm-Rudman-Hollings Deficit Reduction Act (1985). Hollings led in the creation of the Special Supplemental Nutrition Program for Women, Infants, and Children in 1972 and passage of the Telecommunications Act of 1996.

Kirk Victor covers the U.S. Senate for the National Journal and was part of a reporting team that won a National Headliner Award in 2005 for coverage of Congress. A native of Savannah, Georgia, Victor has a law degree from the Antioch School of Law and an M.S. degree in journalism from Columbia University.

"In a gripping examination of the severe crisis confronting the United States, Hollings taps his more than one-half century of public service and presents this user's guide to democracy."—Living in South Carolina

"Fritz Hollings is working on a government reform project he can only conduct from the outside—getting the money out of politics and the politics back into Congress. . . . He outlines his plans for getting Washington off the money mill in Making Government Work."—Bill Moyers Journal

"Only Hollings could make such a compelling case on how to make government work. His straightforward style will appeal to anyone interested in the inner workings of government."—Bob Dole

"In this engaging memoir Hollings demonstrates that he's still telling it like it is! In direct no-nonsense language, he describes his remarkable political career of nearly a half century of service to the people of South Carolina and the nation. When you finish this lively book, you'll agree that Fritz Hollings was an extraordinary Senator and public servant."—George J. Mitchell

"Fritz Hollings, the keenest wit in the Senate and a grand storyteller, reveals how the people's business gets done; why big money, nonstop news cycles, polling, and armies of costly consultants produce only deadlock; and what we can do to make our government work again. Every voter should read this book."—Richard J. Whalen

"Still showing his trademark wit and wisdom, Hollings treats us to an insider's candid retrospective on how government forged successes in the past, as well as a compelling vision of how it can be made to serve the people's interests better in the future. He has given us an owner's manual for operating our democracy in the twenty-first century."—Richard W. Riley

"Making Government Work is part autobiography, part political history, and part guidance on how Hollings, a former South Carolina governor who served six terms in the U.S. Senate speaking his mind, believes the nation can solve its problems."—Greenville (S.C.) News

"With razor-sharp wit and insight, former South Carolina Governor and U.S. Senator Ernest Hollings has produced a rare species of political memoir that stresses deal-making, compromises, and genuine bipartisanship to produce effective leadership and legislation in government."—G: The Magazine of Greenville (S.C.)

"Hollings had a reputation for speaking his mind during his many years in office, and he continues to be familiarly forthright in his political memoir."—Charleston (S.C.) Post & Courier

"Hollings makes it clear in Making Government Work that he—perhaps more than any twentieth-century South Carolina political figure—understands the power and possibility of government."—Columbia (S.C.) State

"A thorough memoir of former U.S. Senator Hollings's five decades of public service. A sound account of a half-century's functioning of the legislature."—Kirkus Reviews