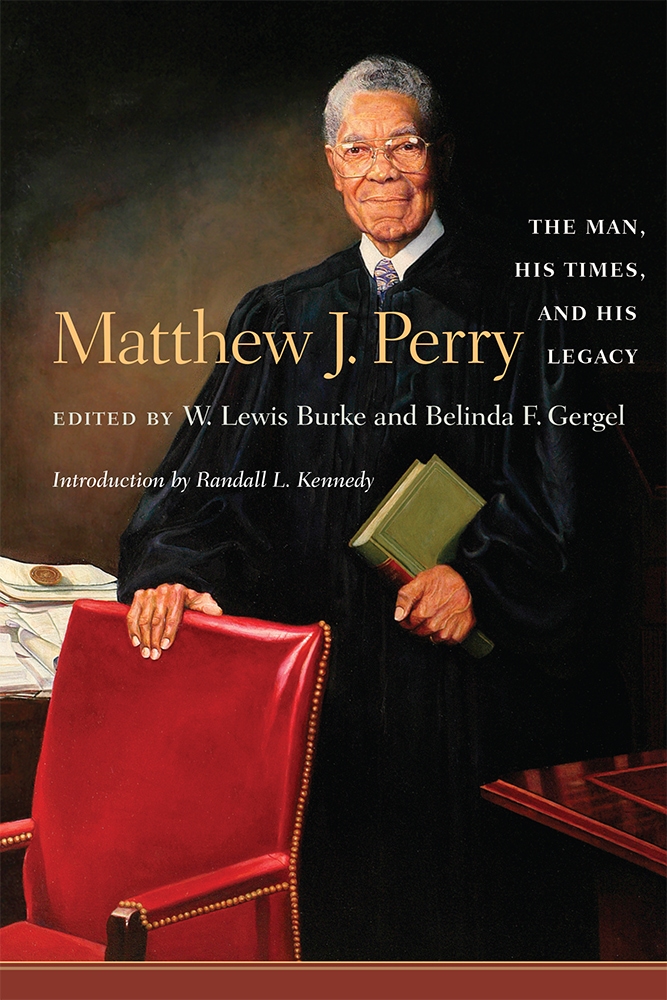 The Man, His Times, and His Legacy

Matthew J. Perry: The Man, His Times, and His Legacy chronicles the life and accomplishments of the attorney who led the struggle for desegregation in South Carolina, served as a primary legal advocate in the national civil rights movement, and became South Carolina's first African American U.S. District Court judge. In this volume, scholars of the civil rights era, fellow civil rights activists, jurists, attorneys, a governor, and an award-winning photojournalist join together to produce a multilayered biography of Matthew J. Perry. Collectively they bring to light the remarkable achievements of a man well known in his home state but sometimes obscured on the national stage by the shadows of Thurgood Marshall, J. Waties Waring, and Charles Hamilton Houston.

This volume tells the story of Perry's life, including his humble beginnings in Columbia, his service to the nation during wartime, his remarkable career as a creator of positive social change, and, finally, his achievements as a respected member of the federal judiciary. The contributors describe Perry's courage, skills as an orator, quick legal mind, and genteel nature. They set his story in the turbulent civil-rights-era South, revealing how broad social, historical, and legal issues affected Perry's life and shaped the trajectory of his activist and professional life. The volume underscores how Perry enabled his home state to escape from Jim Crow's clutches with much less turmoil than many of its neighbors.

Published in concert with the dedication of the Matthew J. Perry, Jr. United States Courthouse in Columbia, South Carolina, this life story portrays an esteemed juror whose grace and resiliency led South Carolina into the twentieth century.

Belinda F. Gergel is the coauthor of In Pursuit of the Tree of Life: A History of the Early Jews of Columbia, South Carolina, and the Tree of Life Congregation and other articles on local history in South Carolina. A former chair of the department of history and political science at Columbia College, she also resides in Columbia.

"If the civil rights struggle were a war, Matthew Perry would receive the Congressional Medal of Honor. He wasn't a billable hours lawyer. He wasn't even a trial lawyer that got paid when he won. He was a trial lawyer who seldom got compensated, was ridiculed, insulted, abused, and jailed for what the legal profession takes for granted. But he persisted and won. Leading the struggle, working around the clock with warmth, dignity, and good humor, he now presides with experienced judgment."—The Honorable Ernest F. Hollings, U.S. Senate

"An extraordinary testament to an extraordinary man. The editors have compiled a compelling and comprehensive look at the contributions of Matthew Perry. I was so inspired by his work that my first legislative act in Congress was to designate a federal courthouse in his honor. This book chronicles why Perry is so worthy of this recognition. I hope it serves to inspire the next generation, as this humble man has inspired me."—The Honorable James E. Clyburn, U.S. Congress

"Matthew J. Perry, like many civil rights lawyers, has been obscured by the shadow of Thurgood Marshall and Charles Hamilton Houston. This impressive collection of essays by distinguished scholars is an important step toward restoring Judge Perry to the prominence he deserves."—Eric Foner, Columbia University, author of Reconstruction: America's Unfinished Revolution, 1863–1877

"This impressive volume pays exuberant and well-deserved attention to the outstanding achievements of Matthew J. Perry. It makes an important contribution to the history of the legal profession in the South and deepens our understanding of the heroic struggles of the black bar to achieve freedom of opportunity for all. The singular life of this great jurist demonstrates how an individual can make the world a better place."—Darlene Clark Hine, Michigan State University, author of Black Victory: The Rise and Fall of the White Primary in Texas

"This fine book makes an important contribution to the public's understanding of American, southern, and South Carolina history—and American legal history—particularly from the 1940s to the present. Its value is enhanced by its timeliness and the reality that the era of the Civil Rights Movement is rapidly fading from public memory."—Michael Kent Curtis, Wake Forest Law School, author of Free Speech, "The People's Darling Privilege": Struggles for Freedom of Expression in American History