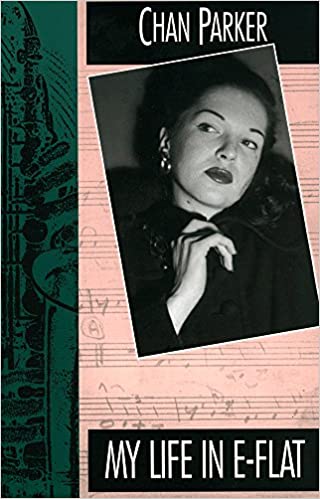 My Life in E-flat

My Life in E-flat is the remarkable memoir of a woman who witnessed some of the most important movements in the history of jazz. Through her autobiography, Chan Parker provides intimate insights into the music and into life with Charlie Parker, the key figure in the development of bebop and one of the most important of all jazz musicians.

Born Beverly Dolores Berg in New York City at the height of the Jazz Age, Parker's father was a producer of vaudeville shows and her mother was a dancer in Florenz Ziegfeld's Midnight Frolic. Parker became part of the jazz culture as a nightclub dancer and later as the wife of jazz saxophonists Charlie Parker and then Phil Woods.

In a moving and candid portrait of Charlie Parker, the author describes in harrowing detail a man of incredible talent besieged with addictions and self-destructiveness. She painfully recounts his death at the age of 35 while married to her and its effect on her life as well as on the musical world. Parker's honest portrait of one of the most gifted musicians in jazz provides unique insight into the history of the music and the difficulties faced by African American performers during the 1940s.

Parker also reflects on her struggle to find her own voice and on her work with Clint Eastwood on the film biography of Charlie Parker, Bird (1988).


Chan Parker was born in New York City and now lives on a farm in Champmotteux, France. In addition to her many roles in the American jazz scene, she has been a dancer, housewife, lyricist, and writer. She is the author of To Bird with Love.

"Chan Parker's brilliant autobiography gives us an honest and well-written insight into her dramatic life on the American jazz scene in the 1940s and 50s—from the heydays on 52nd Street in New York, to her love affairs with and marriages to Charlie Parker and Phil Woods, to her present life of reflection and solitude in France. Highly recommended reading!"—Jan Horne, Norwegian Broadcasting Corporation

"My Life in E-flat is a remarkable memoir of a woman who witnessed some of the most important movements in the history of jazz."—McCormick Messenger

"Yet this is also a book of much charm and dignity, one that finds a center and a refuge in a world of hurt. Her accounts of Parker, Woods, and other musicians are sharply etched and evocative, and add much to what we know of these masters."—Jazziz