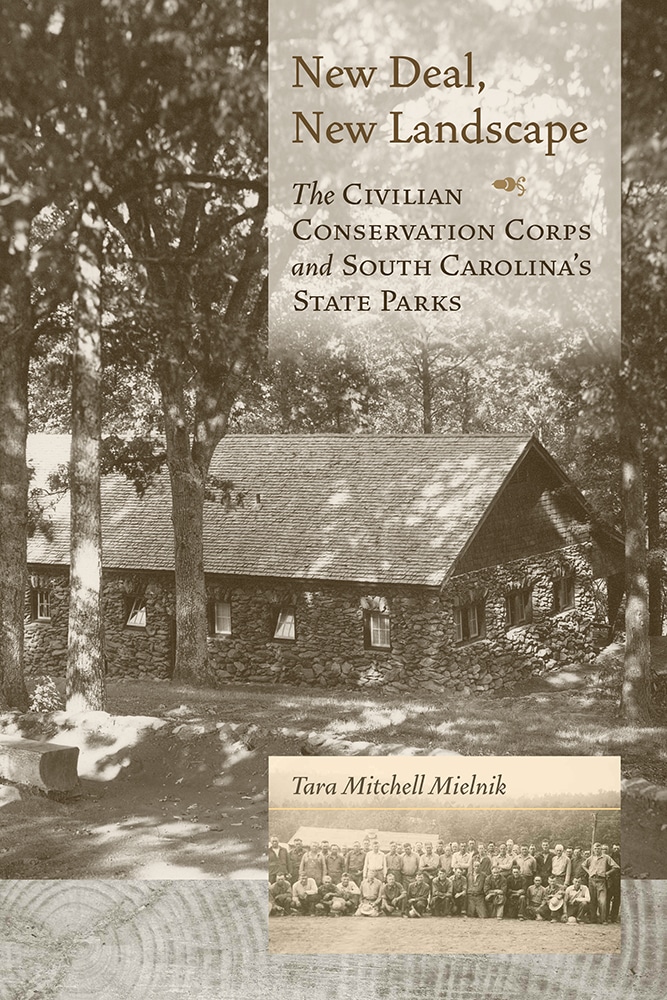 Tara Mitchell Mielnik fills a significant gap in the history of the New Deal South by examining the lives of the men of South Carolina's Civilian Conservation Corps (CCC) who from 1933 to 1942 built sixteen state parks, all of which still exist today. Enhanced with revealing interviews with former state CCC members, Mielnik's illustrated account provides a unique exploration into the Great Depression in the Palmetto State and the role that South Carolina's state parks continue to play as architectural legacies of a monumental New Deal program.

In 1933, thousands of unemployed young men and World War I veterans were given the opportunity to work when Emergency Conservation Work (ECW), one of Franklin Delano Roosevelt's New Deal programs, came to South Carolina. Renamed the Civilian Conservation Corps in 1937, the program was responsible for planting millions of trees in reforestation projects, augmenting firefighting activities, stringing much-needed telephone lines for fire prevention throughout the state, and terracing farmland and other soil conservation projects. The most visible legacies of the CCC in South Carolina are many of the state's national forests, recreational areas, and parks.

Prior to the work of the CCC, South Carolina had no state parks, but, from 1933 to 1942, the CCC built sixteen. Mielnik's briskly paced and informative study gives voice to the young men who labored in the South Carolina CCC and honors the legacy of the parks they built and the conservation and public recreation values these sites fostered for modern South Carolina.

"As more and more attention is being paid to the Great Depression and the New Deal, Tara Mitchell Mielnik provides an excellent volume on that era in South Carolina. With a quick sorting out of the Alphabet Agencies, she focuses on the Civilian Conservation Corps contributions. Not only did the CCC assist thousands of South Carolina families through the Depression, it left perhaps its greatest legacy in the foundation of the South Carolina State Park System. This book is a must-read for anyone interested in the Great Depression, the New Deal response, and the original state parks in the Palmetto State."—Robert G. Pasquill Jr., author of The Civilian Conservation Corps in Alabama, 1933–1942: A Great and Lasting Good

"In this thoroughly researched and comprehensive history of the men that built South Carolina's state parks, Tara Mitchell Mielnik tells compelling stories of the hardships and achievements of the Great Depression. This state-wide study makes extensive use of original records, especially historic photographs, to document the architectural and social legacy of one of the most successful New Deal programs. Most importantly, Mielnik draws heavily on the memories of the Civilian Conservation Corps (CCC) workers themselves, as well as their often entertaining writings in the surviving camp newspapers. The many engaging stories of the book, as told by the men who lived them, give the history an immediacy and intimacy that is typically missing in the official records. She also highlights some of the lesser known aspects of the CCC, in particular the role of World War I veterans and African Americans in the program. New Deal, New Landscape certainly will become the main reference for the history of the state's park system and an important contribution to the national history of conservation."—Al Hester, South Carolina State Park Service

"Tara Mitchell Mielnik's masterful blend of social, political, architectural, and public history will appeal to anyone interested in twentieth-century South Carolina. Based on extensive documentary research, interviews, and examinations of the state parks themselves, it highlights and interprets the perspectives of CCC administrators and the rank-and-file, the landscape architects who designed the parks, and the communities where those parks were built. Mielnik's compelling portrait of one way in which the Depression made a positive and lasting impact on the Palmetto State is a fitting memorial to the "CCC boys" long gone and a tribute to the few of them still with us."—Tracy Power, South Carolina Department of Archives and History