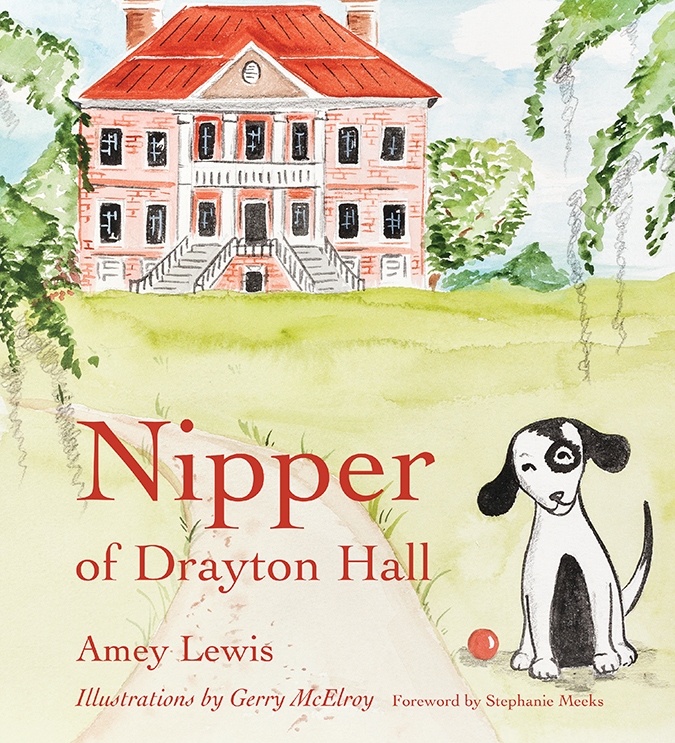 Nipper of Drayton Hall is the just-about-true story of real-life characters who loved a grand old house and the natural beauty of its surroundings on the Ashley River of Charleston, South Carolina. Join Nipper, an energetic little dog, and his beloved Charlotta Drayton as they travel from Charleston's Battery to historic Drayton Hall and spend a spring day in 1916. At Drayton Hall, Nipper plays with his friend, eight-year-old Richmond Bowens. Both Charlotta and Richmond have family ties to Drayton Hall going back many generations, and both do their part to preserve the history and spirit of their families' homes.

With his ever-present red ball, Nipper lets his curiosity—and Charlotta's and Richmond's lessons—guide his adventures as he explores the house and grounds. As the story unfolds, he has a close call with an alligator, but he makes it home to dream his way to the stars. The story by Amey Parsons Lewis and the watercolor illustrations by Gerry McElroy give readers of any age an informative and engaging look into the past of Drayton Hall, a historic house museum operated by the Drayton Hall Preservation Trust and owned by the National Trust for Historic Preservation. Drayton Hall is the oldest surviving example of Georgian-Palladian architecture in the United States and one of just a few pre-Revolutionary War homes still in near-original condition today. As much a story of friendship and discovery as of facts and history, Nipper's tale is a welcoming invitation to see and share in the beauty and lasting significance of Drayton Hall.

Seven generations of the Drayton family are tied to the history of the home and its grounds, from John Drayton, who established the plantation in 1738, to Charles and Frank Drayton, who transferred the property to the National Trust for Historic Preservation and the State of South Carolina in 1974 to ensure its preservation. Seven generations of African Americans are connected to Drayton Hall as well, most notably the Bowens family, including Richmond Bowens (1908-1998), who would become Drayton Hall's oral historian, its greatest resource on African American history at Drayton Hall, and the inspiration for its Connections: From Africa to America program, which continues to this day. Through the innocent eyes of Nipper, this story of Charlotta Drayton and young Richmond Bowens honors both families and brings Drayton Hall vibrantly to life. A timeline of Drayton Hall history and a glossary of important features and names enhance the story and artwork to the benefit of readers, parents, and teachers.


Amey Lewis is a former teacher living with her husband on Wadmalaw Island near Charleston, South Carolina. She earned a B.A. in English from Francis Marion University and holds dear her forty-year association with Drayton Hall and the Drayton family. A mother of three and grandmother of seven, Lewis has a lifelong love of reading and teaching, which led her to write Nipper of Drayton Hall, her first book.

Artist Gerry McElroy is a graduate of the Parsons School of Design and a former New York fashion designer. A freelance artist and art instructor, McElroy is the mother of three and now lives at Edisto Beach, South Carolina.

"A graceful, episodic story set in 1916 about South Carolina's Drayton Hall Plantation, told through the eyes of a lively black-and-white dog, Nipper, who really lived there. Lewis tells a compelling story, accompanied by McElroy's exquisite watercolor illustrations, of this old plantation house and the last generation of the Drayton family who inhabited it. . . . Between nipping, yipping, and escaping from an alligator, Nipper tells a great story of a long-ago time but of a place that still stands."—Kirkus Reviews (starred)

"Our cousin Richmond Bowens loved Drayton Hall and told us many stories about it over the years. Now we have this delightful book. It's a pleasure for people of all ages and tells a story that Richmond himself would have loved to read and share with others."—Catherine Braxton and Rebecca Campbell

"Do you love dogs? Historic places? An imaginative story? If so, this book is the one for you, regardless of age. In fact, this 'just-about-true' story about a real dog, a real lady, and a real boy is a pleasure for adults to read to children, or for children to read to adults."—George W. McDaniel, president and executive director, Drayton Hall Preservation Trust

"Nipper, Aunt Charley, Sammy, Emma, and Richmond are so charmingly captured and evoked so many fond memories of my youth at Drayton Hall. Aunt Charley would have loved this story (but I cannot 'bark' for Nipper)."—Charles H. Drayton, III