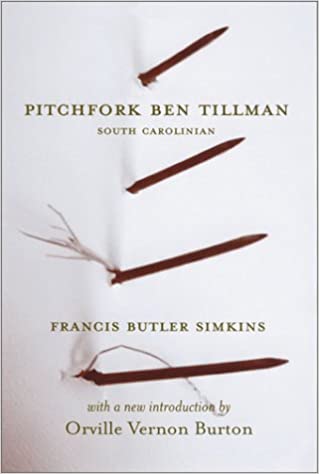 The definitive biography of a controversial South Carolina leader

Upon its initial publication in 1944, Pitchfork Ben Tillman was a signal event in the writing of modern South Carolina history. In a biography the Journal of Southern History called "definitive," Francis Butler Simkins, a South Carolinian and Columbia University-educated historian, brings his research skills and professional dispassion to bear upon a study of one of the state's most controversial political leaders.

Benjamin Ryan Tillman (1847-1918) accomplished a political revolution in South Carolina when he defeated Governor Wade Hampton and the old guard Bourbons who had run the state since the end of Reconstruction. Tillman and his movement aimed to expand the political control of the state to lower- and middle-class whites at the expense of African Americans and the state's former leaders. During his political ascendancy as governor and then United States Senator, Tillman introduced the state's dispensary system and shaped the state's 1895 constitution into a bulwark of white supremacy. His legacy was one of divisiveness between black and white and between whites of differing economic and geographical backgrounds. Even as Tillman championed greater equity for white farmers and mill workers, he masterminded the pernicious system of segregation and disfranchisement for African Americans during the 1890s when he not only trampled their needs, but stripped them of fundamental political and civil rights. Almost single-handedly Tillman established the iniquities of Jim Crow that countless other Southern demagogues would imitate. These "accomplishments" would plague the South and the nation until this day. Orville Vernon Burton's new introduction to this Southern classic looks at both Tillman and author Francis Simkins as prime examples of southerners with tremendous talent but unsettling accomplishments.


Francis Butler Simkins (1897–1966) was a historian and a past president of the Southern Historical Association who made important contributions to the study of race relations. Born in Edgefield, South Carolina, Simkins received his B.A. from the University of South Carolina and his M.A. and Ph.D. from Columbia University.

Reared in Ninety Six, South Carolina, historian Orville Vernon Burton is a University Scholar and University "Distinguished Teacher/Scholar" at the University of Illinois at Urbana-Champaign. He is the author of In My Father's House Are Many Mansions: Family and Community in Edgefield, South Carolina. Burton lives in Urbana.