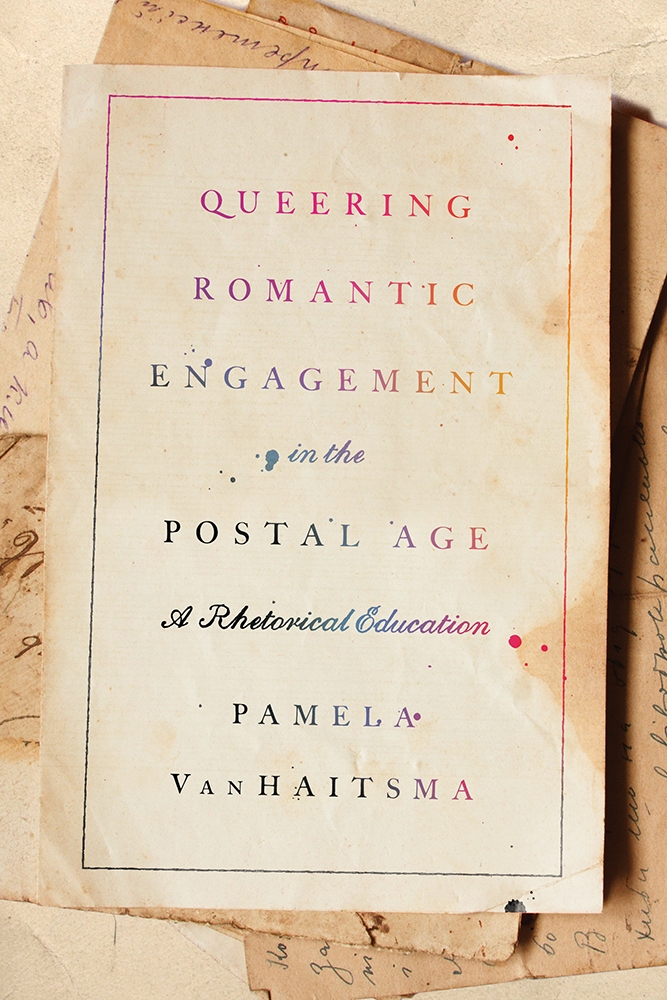 Romantic letters are central to understanding same-sex romantic relationships from the past, with debates about so-called romantic friendship turning on conflicting interpretations of letters. Too often, however, these letters are treated simply as unstudied expressions of heartfelt feeling. In Queering Romantic Engagement in the Postal Age: A Rhetorical Education, Pamela VanHaitsma nuances such approaches to reading letters, showing how the genre should be understood instead as a learned form of epistolary rhetoric.

Through archival study of instruction in the romantic letter genre, VanHaitsma challenges the normative scholarly focus on rhetorical education as preparing citizen subjects for civic engagement. She theorizes a new concept of rhetorical education for romantic engagement—defined as instruction in language practices for composing romantic relations—to prompt histories that account for the significant yet unrealized role that rhetorical training plays in inventing both civic and romantic life.

VanHaitsma's history of epistolary instruction in the nineteenth-century United States is grounded in examining popular manuals that taught the romantic letter genre; romantic correspondence of Addie Brown and Rebecca Primus, both freeborn African American women; and multigenre epistolary rhetoric by Yale student Albert Dodd. These case studies span rhetors who are diverse by gender, race, class, and educational background but who all developed creative ways of queering cultural norms and generic conventions in developing their same-sex romantic relationships. Ultimately, Queering Romantic Engagement in the Postal Age argues that such rhetorical training shaped citizens as romantic subjects in predictably heteronormative ways and simultaneously opened up possibilities for their queer rhetorical practices.


Pamela VanHaitsma is an assistant professor at Penn State University. The 2015 recipient of the Rhetoric Society of America's Charles Kneupper Award for an essay in Rhetoric Society Quarterly, she has also published work in Advances in the History of Rhetoric, College Composition and Communication, Peitho, College English, and Rhetoric Review, among others.

"In this fascinating study of queer rhetorical practices in nineteenth-century romantic letters, VanHaitsma makes a significant contribution by contesting normative views of rhetorical education as preparation for civic engagement. She reframes the concept not only in terms of civic but also what she terms "romantic engagement." VanHaitsma opens rich potential for future scholarship, including "queer movement toward failure" as cultural critique.""—Suzanne Bordelon, San Diego State University

"Dear reader, prepare yourself for a romantic engagement with this delicious little book as VanHaitsma challenges conventional views on rhetorical education, the epistolary genre, and citizenship. This smart queer rhetorical history ruptures the fragile distinction between the romantic and the civic and reads as a passionate love letter to nonnormative worldmaking and possibility."—Karma R. Chávez, Arizona State University

"Pamela VanHaitsma has crafted a love letter to everyday rhetorical ingenuity of queer romance in epistolary discourse of the postal age. Her creative and critical reconsideration of non-normative romantic correspondence queers our understanding of where and how innovative "failures from the heart" have mattered"—Charles E. Morris III, Syracuse University

"As a book that capably straddles feminist, queer, and rhetorical scholarship, readers will find a great deal to appreciate in this concise monograph. The text's primary contribution is to rhetorical historiography, where it offers an innovative methodological approach to confronting archival absences and accounting for queer rhetorical practices that are notoriously elusive."—Journal for the History of Rhetoric

"Queering Romantic Engagement in the Postal Age: A Rhetorical Education offers the first queer rhetorical history of nineteenth-century romantic epistolary practices in the United States This slim volume's claims are compelling and accessible, its glimpse into the queer letters of nineteenth century rhetors is utterly fascinating, and it is an excellent example of how to bring queer scholarship to bear on the field's more traditional concerns with history, citizenship, and genre."—Rhetoric Society Quarterly

"[A]ny course that teaches or integrates archival research methods would benefit by including Queering Romantic Engagement in the Postal Age in its curriculum...all scholars of rhetoric can benefit from VanHaitsma's queer archival methods. She invites scholars to think capaciously and creatively about archival research and the interpretation of affect within archival materials. Importantly, her approach to queering archival methods can open up new lines of questioning, highlight new relationships, and enliven the research of any scholar whose research subject has been systematically erased from archival history."—Peitho