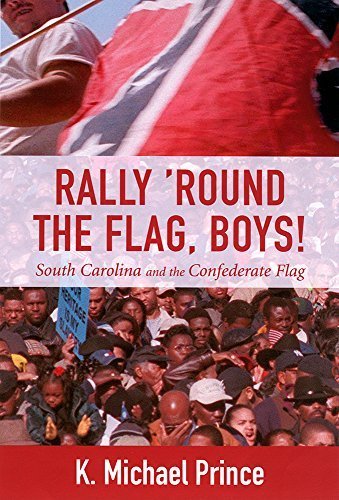 Rally 'Round the Flag, Boys

South Carolina and the Confederate Flag

Rally 'Round the Flag, Boys! is the most comprehensive history to date of the Confederate flag controversy that has engaged South Carolina politics for nearly four decades. Originally raised over the state capitol in 1961 to commemorate the centennial of the American Civil War, the flag remained atop the State House dome until July 2000. Failed negotiations and bitter confrontations between the flag's defenders and its opponents have made the "flag issue" a flash point of South Carolina politics and culture.

Setting the stage for the political drama to come, K. Michael Prince places the Confederate battle flag—the flag most often displayed—in historical context, as one of many unit and national flags carried by Confederate forces. He also offers insights into the conflicting symbolism of these flags. For many citizens, usually white South Carolinians, the Confederate flag represents heroism, a fight for national survival, and a lost heritage, while many others, especially African Americans, view it as a symbol of oppression, violence, and human degradation.

Prince tells the story from many perspectives, and the clashes between those boycotting South Carolina to force the flag's removal from the State House and those "defending it at the dome" make for fascinating reading. Even more interesting perhaps are the stories Prince tells of those seeking, ever more urgently in the 1990s, a political and social compromise that would free all South Carolinians—regardless of race, age, or ancestry—from narrowly partisan views of history.

Empathetic toward both sides, Prince turns the participants' narratives into compassionate history and intriguing politics. His account of the legislative battle that led to the flag's removal from the State House dome is rendered in compelling detail. Readers not only learn about, but also sense, the anguish of legislators—black and white—forced to confront their personal and political convictions as they took a stand for or in opposition to the Old South that the flag represented. Facing a divisive past, South Carolinians and the General Assembly found their way to a compromise many hoped would begin to define their future. The fact that the NAACP continues to support a boycott of the state as long as the flag flies anywhere on the State House grounds testifies to the importance of the flag as a divisive symbol.


K. Michael Prince, a native South Carolinian, holds degrees from Clemson University, the University of Virginia, and the University of Munich. A freelance writer and translator, Prince focuses on the political and cultural impact of war, in particular of the Civil War and the Second World War, and the meanings applied to historical experience. He lives in Munich, Germany.

"More than the definitive account of the Confederate battle flag controversy in South Carolina, this book cuts through the fog of the war over history to offer a balanced, insightful perspective on how a southern state attempted to reconcile its divisive pasts. K. Michael Prince is adept at setting the historical context, illuminating the ironies and foibles of the participants, and offering hope for an eventual reconciliation."—David Goldfield, University of North Carolina at Charlotte, and author of Still Fighting the Civil War: The American South and Southern History

"With a vivid sense of history, K. Michael Prince provides a balanced, scholarly, and provocative work that enhances understanding of a symbol that evokes competing and deep-seated feelings about identity."—Jack Bass, College of Charleston, and coauthor of The Orangeburg Massacre