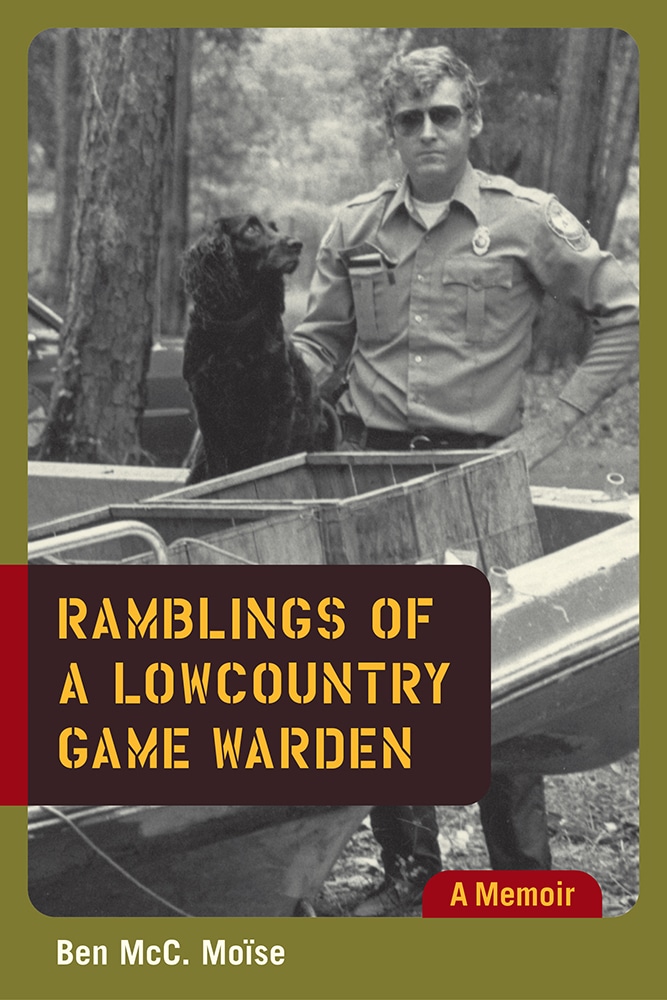 Ramblings of a Lowcountry Game Warden

Ben McC. Moïse served with distinction as a South Carolina game warden for nearly a quarter century, patrolling the coastal woods and waters of the Palmetto State. In this colorful career-spanning memoir, the cigar-chomping, ticket-writing scourge of lowcountry fish-and-game-law violators chronicles grueling stakeouts, complex trials, hair-raising adventures, and daily interactions with a host of outrageous personalities. With a lawman's eye for fine details, a conservationist's nose for the aroma of pluff mud, and a seasoned storyteller's ear for the rhythms of a good southern yarn, Moïse recounts his stout-hearted and steadfast efforts to protect the lowcountry landscape and bring to justice those who would run roughshod over fish and game laws on the Carolina coast. Along the way he paints a vivid portrait of evolving attitudes and changing regulations governing coastal conservation.

Ben McC. Moïse was a conservation officer with the South Carolina Department of Natural Resources from 1978 to 2002. In recognition of his achievements in law enforcement, he was presented the Guy Bradley Award by the North American Fish and Wildlife Foundation in 1990 and the Order of the Palmetto by South Carolina governor Carroll Campbell in 1994. A contributor to the Charleston Post and Courier, Charleston Mercury, and other regional publications, Moïse lives in Charleston.

"Sometimes humorous, sometimes harrowing this book is for the outdoorsman or anyone who craves the true tales of an alligator-wrestling, drug-cartel-snuffing undercover badass."—Garden and Gun Magazine

"For readers who love the outdoors and lowcountry wildlife, this is a must-read book."—Charleston (S.C.) Post and Courier

"The book is entertaining, funny enough to make you laugh out loud, and, above all, insightful."—Columbia (S.C.) State

"The 'thin green line' that Moïse represents reminds us that there is a system in place to safeguard our natural resources."—Charleston (S.C.) Mercury

"The stories are pure, honest and unembellished [Moïse] ably demonstrates his passion for his job."—International Game Warden Magazine

""Knowing Ben for over twenty-five years, I often watched in amazement as he mesmerized hunters, anglers, and outdoorsmen with his aristocratic lowcountry drawl and unique ability to hand a ticket to a violator and make him think he was given a gift. Though his accounts are humorous, his forceful conservation ethic portrays his dedication and passion for natural resources.""—John E. Frampton, director, South Carolina Department of Natural Resources

"For the past thirty years Ben Moïse has defined the role of game warden as raconteur, sportsman, socialite, chef, and guardian of terrestrial and aquatic wildlife. This book includes a delightful assortment of inside stories about fish rustling, dove burgling, and other wildlife escapades and features some classic lowcountry characters on both sides of the law."—Dana Beach, executive director, Coastal Conservation League

"Ramblings gives us a smile on every page, a chuckle on every other, and belly laughs at unexpected intervals. Slipped beneath, beside, and between the humor are important things about our state's shared-by-all natural resources. This memoir should be required reading for every hunter, fisherman, game warden, and storytelling fan in South Carolina."—William P. Baldwin, author of The Hard to Catch Mercy and Lowcountry Plantations Today