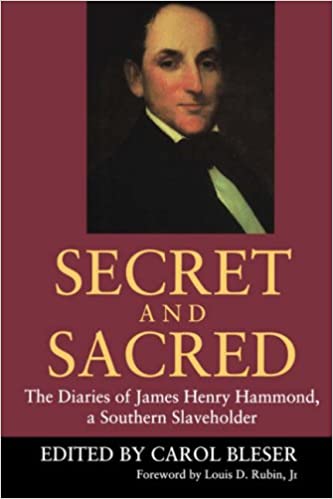 The Diaries of James Henry Hammond, a Southern Slaveholder

The thoughts, triumphs, travails, and, at times, despicable actions of a leading antebellum politician

A remarkably candid set of diaries, Secret and Sacred brings to light the intimate journal notations of James Henry Hammond, a prominent South Carolina planter and slaveholder whose life story is as intriguing as that of a Faulkner character.

James Henry Hammond was born into poverty but married into wealth and expanded his plantations and slaveholdings until they were among the largest in the South. A leading spokesman for the South, he served as a congressman, U.S. senator, and South Carolina governor. In his private life, he dominated his family, sexually violated his young nieces (causing a scandal that nearly wrecked his career), and fathered children by his slaves. All the while he kept his "secret and sacred" journals. These diaries, which span from 1841 to 1864, reveal a man whose fortune and intellect combined to make him an important southern leader but whose deep character flaws kept him from the true greatness to which he aspired.

Carol Bleser gracefully explicates Hammond's background and weaves his entries into a cohesive collection that reads like a novel of the Old South.


Carol Bleser is Kathryn and Calhoun Lemon Distinguished Professor of History at Clemson University. She was one of the first women to receive a National Endowment for the Humanities Fellowship.

"[Hammond's] extensive entries shed much light on state and national politics in the late antebellum period. The greatest value of this book, however, is the extraordinary insight it provides into the mentality and psychology of a powerful member of the slave-owning class."—Choice