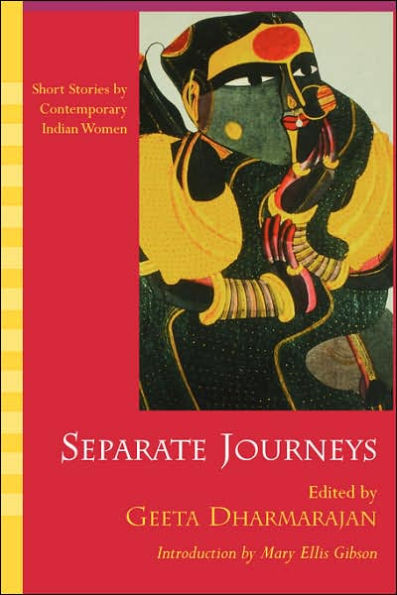 This collection, which gathers fifteen stories by contemporary Indian women representing the varied languages and regions of their subcontinent, is now available to an American audience for the first time. Western readers have come to recognize the names of Indian writers such as Arundhati Roy and Salman Rushdie. But there is great diversity in Indian fiction, and to refer to all literature produced in India or by Indians under a single rubric suppresses rich differences. The region's vibrant literary tradition comprises diverse cultures and writing styles. The array of stories in this collection brings out linguistic, regional, ethnic, and class-based variety in the manner of anthologies of any nation's literature, but with a range and depth rarely matched elsewhere.

The stories included in Separate Journeys powerfully evoke Indian women's lives in diverse settings, from urban to village to rural. Unfolding the complex interplay of gender, language, class, and ethnicity characteristic of this part of the world, and running from the passionate to the poignant, from the personal to the universal, the stories are a moving testament to the human spirit.


Geeta Dharmarajan is the executive director of Katha, an organization devoted to storytelling and its role in culture and education. The founder and principal team leader of the organization, she serves as the editor of books in Garutmän's Katha Prize Stories series. The editor of Tamasha!, a magazine for first-generation school children, Dharmarajan lives in Delhi.

"Geeta Dharmarajan's Separate Journeys is a moving tribute to the depth and variety of Indian writing by women. Its stories evocatively convey the vibrance and complexity of contemporary Indian experience—and Mary Ellis Gibson's introduction provides a sophisticated overview of the challenges of language, translation, gender, and nation faced by Indian writers today. This is a vital text for any student or teacher of South Asian literatures"—Kathleen M. Hewett-Smith, Department of English, University of Richmond