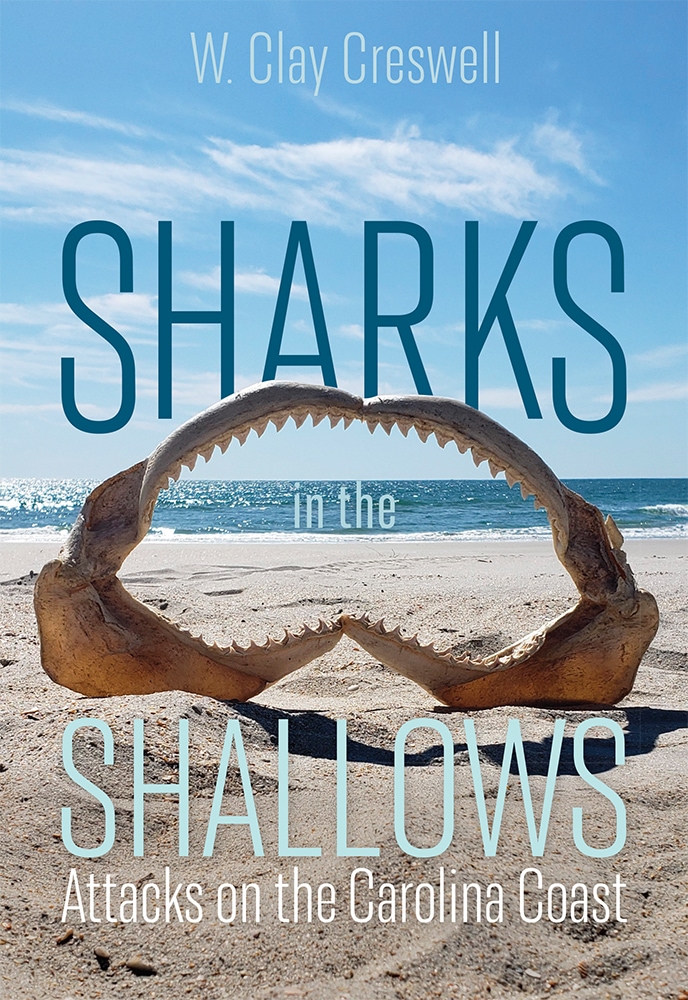 Sharks in the Shallows

Attacks on the Carolina Coast

Powerful and mysterious, sharks inspire both fascination and fear. Worldwide, oceans are home to some five-hundred species, and of those, fifty-six are known to reside in or pass through the waters off the coast of both North and South Carolina. At any given time, waders, swimmers, and surfers enjoying these waters are frequently within just one-hundred feet of a shark. While it's unnerving to know that sharks often swim just below the surface in the shallows, W. Clay Creswell, a shark-bite investigator for the Shark Research Institute's Global Shark Attack File, explains that attacks on humans are extremely rare. In 2019 the International Shark Attack File confirmed sixty-four unprovoked attacks on humans, including three in North Carolina and one in South Carolina.

While acknowledging that they pose real dangers to humans, Creswell believes the fear of sharks is greatly exaggerated. During his sixteen-year association with the Shark Research Institute, he has investigated more than one hundred shark-related incidents and has maintained a database of all shark-human encounters along the Carolina coastlines back to 1817. Creswell uses this data to expose the truth and history of this often-sensationalized topic.

Beyond the statistics related to attacks in the Carolina waters, Sharks in the Shallows offers a history of shark-human interactions and an introduction to the world of shark attacks. Creswell details the conditions that increase a person's chances of an encounter, profiles the three species most often involved in attacks, and reveals the months and time of day with the highest probability of an encounter. With a better understanding of sharks' responses to their environment, and what motivates them to attack humans, he hopes people will develop a greater appreciation of the invaluable role sharks play in our marine environment.

W. Clay Creswell has been a North and South Carolina region shark-bite investigator for the Shark Research Institute Global Shark Attack File since 2004. In this role he has become a trusted media resource for the National Geographic Channel's series When Sharks Attack and local television, newspaper, and online news outlets. Creswell is an environmental health program specialist with the Pender County Health Department in North Carolina.

"Informative and at times spellbinding, Sharks in the Shallows is a unique, earnest, meticulously researched, engaging, and clearly written book about human-shark interactions, with the utmost respect for sharks. You won't find a better, more objective book on the topic."—Daniel C. Abel, author of Shark Biology and Conservation: Essentials for Educators, Students, and Enthusiasts

"Jawsome! Sharks in the Shallows offers a comprehensive look into the reality of interactions between sharks and humans based on scientific research, not fear or mythos. A practical, must have guide for scientists, swimmers, surfers and scuba divers who encounter a shark off the Carolina coastline. Rating, ten sharks teeth!"—Dean W. Fessler, Jr., Deputy Director, The Shark Research Institute

"The Carolinas have long been underappreciated as a hot spot for sharks. In this well-researched book, Clay Creswell brings the importance of the Carolinas into the spotlight, especially regarding interactions between sharks and people."—Charles Bangley, Fisheries Conservation Lab, Smithsonian Environmental Research Center

"With more than 200 years of historical data, W. Clay Creswell's Sharks in the Shallows is a landmark publication for scientists and naturalists alike. It brings valuable insights into the indigenous shark species and their interactions with ocean users in North and South Carolina. Individual case histories and appropriate safety suggestions are provided for the reader to utilize. This book is a must for every ocean user."—Ralph S. Collier, president and founder, Shark Research Committee