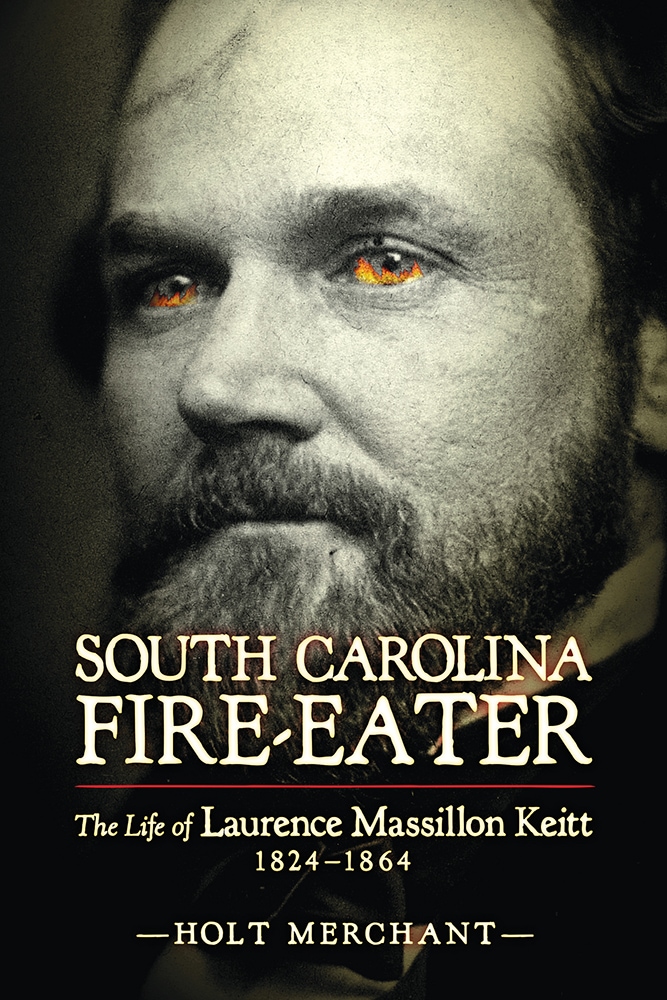 South Carolina Fire-Eater is the first book-length biography of Laurence Massillon Keitt, one of South Carolina's most notorious advocates of secession and apologists for African American slavery. A politician who wanted to be a statesman, a Hotspur who wanted to be a distinguished military leader, Keitt was a U. S. congressman in the 1850s, signed the Ordinance of Secession, and represented his rebellious state in the Confederate Congress in 1861. Through this thoroughly researched volume, Holt Merchant offers a comprehensive history of an important South Carolina figure.

As a congressman, Keitt was responsible for no legislation of any significance, but he was in the midst of every southern crusade to assert its "rights": to make Kansas a slave state, to annex Cuba, and to enact a territorial slave code. In a generation of politicians famous for fiery rhetoric, Keitt was among the most provocative southerners. His speeches in Congress and on the stump vituperated "Black Republicans" and were filled with references to medieval knight errantry, "lance couched, helmet on, visor down," and threats to "split the Federal temple from turret to foundation stone."

His conception of personal honor and his hot temper frequently landed him in trouble in and out of public view. He acted as "fender off" in May 1855 when his fellow representative Preston Brooks caned Charles Sumner on the Senate floor. In 1858 he instigated a brawl on the floor of the House of Representatives that involved some three dozen congressmen. Amid the chaos of his personal brand of politics, Keitt found time to woo and wed a beautiful, intelligent, and politically astute plantation belle who after his death restored the family fortune and worked to embellish her late husband's place in history.

After Abraham Lincoln was elected president, Keitt and the rest of the South Carolina delegation resigned their seats in Congress. He then negotiated unsuccessfully the surrender of Fort Sumter with lame-duck president James Buchanan, played a major role in the December 1860 Secession Convention that led his state out of the Union, and a lesser role in the convention that formed the Confederacy. Bored with his position as a member of the Confederate Congress, Keitt resigned his seat and raised the 20th South Carolina Infantry.

Keitt spent most of the war defending Charleston Harbor, sometime commanding Battery Wagner, the site of the July 18, 1863, assault by the 54th Massachusetts Regiment of African American troops, made famous by the movie Glory. Keitt took command the day after that battle and was the last man out of the battery when his troops abandoned it in September 1863. In May 1864, his regiment joined the Army of Northern Virginia and Keitt took command of Kershaw's Brigade. Inexperienced in leading troops on the battlefield he launched a head-long attack on entrenched Federal cavalry in the June 1, 1864, Battle of Cold Harbor. Keitt was mortally wounded advancing in the vanguard of his brigade. With that last act of bravado, Keitt distinguished himself. He was among the few fire-eater politicians to serve in the military and was likely the only one to perish in combat defending the Confederacy.


Holt Merchant, until he retired in 2013, was a professor and chair of the history department at Washington & Lee University in Lexington, Virginia.

". . . this is an engaging, nuanced, and perceptive study."—South Carolina Historical Magazine

"Holt Merchant's biography of the South Carolina secessionist is as brisk and fast-paced as the life of Laurence Keitt himself. The author's dogged research does justice to this complex and critically important historical figure. Readers of this important study will find important new evidence of Keitt's congressional career, his sense of honor, his part in the Sumner-Brooks affair, his role during the secession winter and the creation of the Confederacy, and his military record, as well as a fascinating and touching treatment of Keitt's marriage and family. The biographer and his subject have finally met."—Eric H. Walther, professor of history, University of Houston

"Perhaps the purest of the fire-eaters, Keitt fought earnestly for secession and won. He then fought with equal vigor for the Confederacy and died. Merchant's path-breaking biography is deeply researched and skillfully presented. A MUST read for anyone interested in the breakup of the young union."—James Robertson, author of Stonewall Jackson