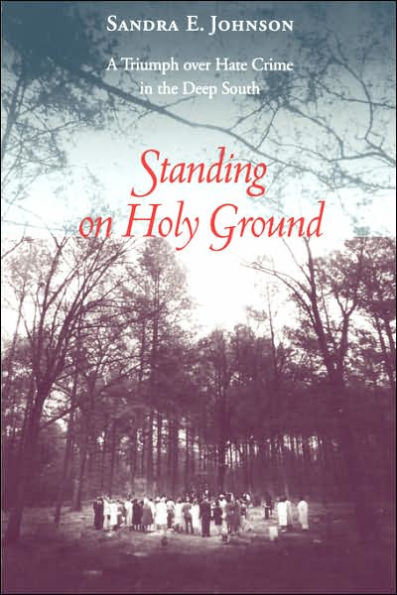 A Triumph over Hate Crime In the Deep South

After a vicious hate crime destroyed St. John Baptist Church in Dixiana, South Carolina, in 1984, two courageous women risked their lives to organize the rebuilding effort. Ammie Murray, a white union leader, and her African American friend Barbara Simmons braved death threats to successfully lead an interracial group of volunteers to reconstruct the historic African American church. But their joy was short-lived. In 1995, St. John was the first of more than one hundred southern black churches plagued by a series of arsons during a two-year period. The obstacles to erecting the church once more seemed insurmountable but proved no match for the tenacity of those determined to see St. John rise again.

Standing on Holy Ground is an inspiring tale that proves friendship, reconciliation, spiritual strength, and enduring hope can transcend racial hatred. In a moving narrative, Sandra E. Johnson chronicles how the fearless duo of Murray and Simmons sparked a victory against hate crime in their community and became leaders in a national battle against violence and vandalism.


Sandra E. Johnson has taught writing at the University of South Carolina, and her work has been published in the Washington Post, Transitions Abroad, and Columbia Metropolitan Magazine. A guest columnist for the State newspaper, Johnson lives in Columbia.

"A ruthlessly honest account of the new progressive South still struggling with a very old legacy of hate."—USA Today

"A shocking and ultimately heartening case study of political involvement, social action, and religious faith. . . .Johnson spins a far wider web and covers the rise of the Klan in the South; an enormous, seemingly planned, epidemic of vandalism inflicted upon southern black churches in the 1980s and 1990s; and the complicated racial politics of the southern law enforcement and legal system. . . . By the end, the book becomes a stimulating whodunit and courtroom drama."—Publishers Weekly

"A gripping page-turner. . . . This touching and compelling story of the heinous effect hate crimes can have on a community delivers the uplifting message that people can overcome hatred and renew a community."—Library Journal

"Shows how faith, love, and sheer bullheadedness may lose battle after battle against racism and still win the war."—O Magazine