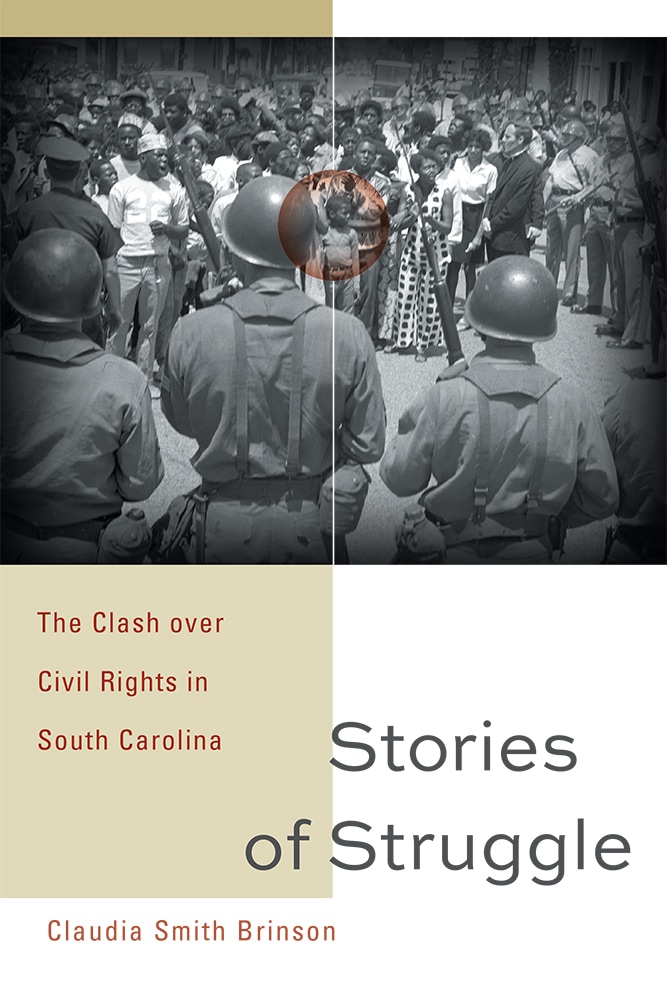 The Clash over Civil Rights in South Carolina

In this pioneering study of the long and arduous struggle for civil rights in South Carolina, longtime journalist Claudia Smith Brinson details the lynchings, beatings, bombings, cross burnings, death threats, arson, and venomous hatred that black South Carolinians endured—as well as the astonishing courage, devotion, dignity, and compassion of those who risked their lives for equality.

Through extensive research and interviews with more than one hundred fifty civil rights activists, many of whom had never shared their stories with anyone, Brinson chronicles twenty pivotal years of petitioning, preaching, picketing, boycotting, marching, and holding sit-ins. Participants' use of nonviolent direct action altered the landscape of civil rights in South Carolina and reverberated throughout the South.

These firsthand accounts include the unsung petitioners who risked their lives by supporting Summerton's Briggs v. Elliot, a lawsuit that led to the historic Brown v. Board of Education decision; the thousands of students who were arrested and jailed in 1960 for protests in Rock Hill, Orangeburg, Denmark, Columbia, and Sumter; and the black female employees and leaders who defied a governor and his armed troops during the 1969 hospital strike in Charleston.

Brinson also highlights contributions made by remarkable but lesser-known activists, including James M. Hinton Sr., president of the South Carolina Conference of Branches of the National Association for the Advancement of Colored People; Thomas W. Gaither, Congress of Racial Equality field secretary and scout for the Freedom Rides; Charles F. McDew, a South Carolina State College student and co-founder of the Student Nonviolent Coordinating Committee; and Mary Moultrie, grassroots leader of the 1969 hospital workers' strike.

These intimate stories of courage and conviction, both heartbreaking and inspiring, shine a light on the progress achieved by nonviolent civil rights activists while also revealing white South Carolinians' often violent resistance to change. Although significant racial disparities remain, the sacrifices of these brave men and women produced real progress—and hope for the future.

Claudia Smith Brinson, a newspaper journalist in South Carolina for more than thirty years, spent much of her career with Knight Ridder media company as a senior writer, writing coach, associate editor, and columnist. She taught writing at the University of South Carolina and directed the Writing for Print and Digital Media major at Columbia College. Brinson won more than thirty state, regional, and national awards, including Knight Ridder's Award of Excellence and an O. Henry Award for short fiction, and she was a member of the Pulitzer finalist team covering Hurricane Hugo.

"If you think nothing of significance involving civil rights happened in South Carolina read Stories of Struggle. If you think South Carolina lacked drama, cruelty, violence, and above all courage during the civil rights era read this book. If you are not familiar with James M. Hinton, Cecil Ivory, Mae Frances Moultrie, Rosetta Simmons, and many others, read this book. There are no statues of these men and women, but they are some of the toughest, bravest, and most resourceful people that South Carolina has ever produced."—William C. Hine, author of South Carolina State University: A Black Land-Grant College in Jim Crow America

"From the battlefront of social change in America, and especially South Carolina, Stories of Struggle brings to life personalities not known by many who played significant roles pioneering events that initiated the civil rights movement. This is a major contribution to understanding the people behind the scenes who led the fight."—Cecil Williams, photographer and founder, Cecil Williams Civil Rights Museum

"Stories of Struggle is a powerful book. Claudia Smith Brinson has combined unforgettable personal remembrances with traditional public sources to give all twenty-first century South Carolinians an important, thought-provoking resource for our challenging times."—Walter Edgar, author of South Carolina: A History

"Stories of Struggle is an inspiring and engaging narrative of pivotal moments in the twentieth century Black freedom struggle in South Carolina. Particularly riveting are the insightful portraits of an amazing cast of Black freedom fighters who advanced the brave and enduring struggle aimed at both creating an egalitarian society and uprooting white supremacy in South Carolina and beyond."—Waldo E. Martin, University of California, Berkeley

"Stories of Struggle is essential reading for anyone seeking to understand the fight for racial justice in South Carolina. The riveting stories are horrifying in their depiction of what African American activists in the state endured, yet inspiring and uplifting in their description of what all these heroes accomplished. The book is a tremendous contribution to the history of South Carolina and the nation, and to the history of the civil rights movement."—Marjorie J. Spruill, author of Divided We Stand: The Battle Over Women's Rights and Family Values That Polarized American Politics

"In Stories of Struggle, Claudia Smith Brinson does an exceptional job in detailing in depth the full story of the significant role black South Carolinians played in the ultimate struggle that led to the U. S. Supreme Court ruling in Brown v. Board of Education that brought an end to racial segregation in public schools and ultimately the passage of 1964 Civil Right Act and 1965 Voting Rights Act that followed."—Jack Bass, author of The Palmetto State: The Making of Modern South Carolina