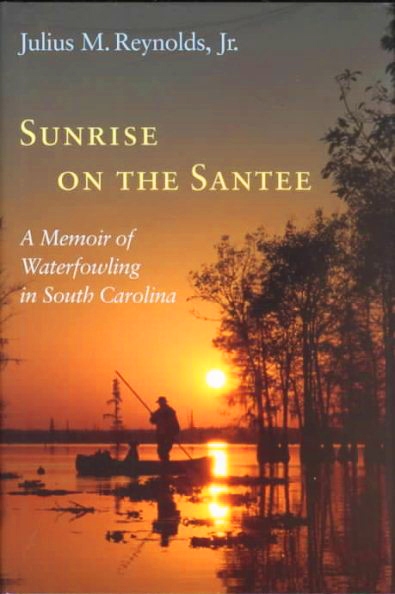 Sunrise on the Santee

A Memoir of Waterfowling in South Carolina

A duck hunter gets his limit of cherished memories

For more than half a century, Julius M. Reynolds, Jr. has hunted waterfowl, and the Santee lakes of South Carolina have been his sporting paradise. Early mornings, cold duck blinds, and sunrises on the Santee compose some of his most prized memories. Reynolds has lived on both sides of the lakes and has roamed them from the Santee delta to the Pinopolis powerhouse. He has witnessed both the glory days and the decline of duck hunting in South Carolina. With this heartfelt memoir, Reynolds recalls his best hunting stories, shares his knowledge of waterfowling, and chronicles recent dramatic changes in his beloved sport.

Describing himself as a Sumter boy who "grew up chasing ducks in Pocotaliago Swamp and from one end of the lake to the other," Reynolds takes readers into the Santee's best duck hunting areas—from Cane Branch, Billup's Slough, and Line Island, all located around Jack's Creek, to McGirt's Lake, Otter Flat, Riser's Old River, Pine Island Creek, Broadwater, Indigo Flat, and Fuller's Earth Creek, Reynolds's favorite hunting spots in the Santee Swamp. He tells stories of memorable trips, colorful South Carolina sportsmen, favorite dogs, boats, shotguns, and the joy of life in the outdoors. He recalls a time when the Santee National Waterfowl Refuge wintered more than 100,000 ducks, and records the heroic efforts of outdoorsmen who saved the Santee Swamp from timbermen's sawmills.

Reynolds touches on his personal milestones—shooting "a hundred straight" of skeet, participating in the national duck calling competition, and hunting in a luxury Arkansas blind—but he also looks to the future of waterfowling. Reynolds challenges the next generation of hunters to save our rapidly vanishing wetlands, for the health of the environment and in the hope that waterfowl migration might return to the Santee., reviewing a previous edition or volume


A duck hunter since his youth, Julius M. Reynolds, Jr. has spent more than fifty years searching out the secrets that make South Carolina's lakes, swamps, and marshes special places for abundant wildlife. A graduate of Clemson University, he lives in Orangeburg, South Carolina.