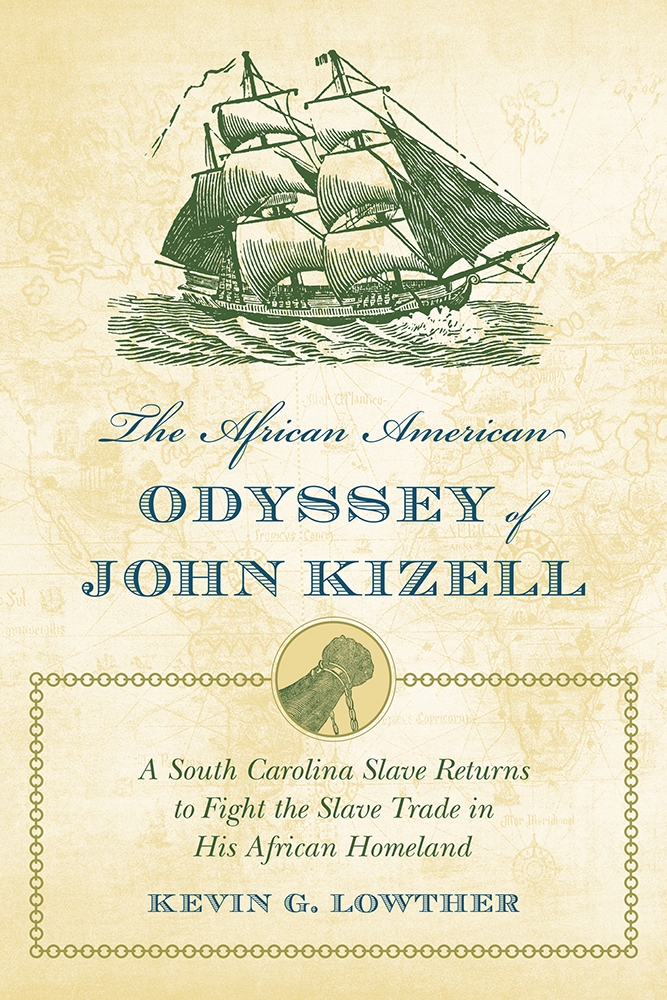 The inspirational story of John Kizell celebrates the life of a West African enslaved as a boy and brought to South Carolina on the eve of the American Revolution. Fleeing his owner, Kizell served with the British military in the Revolutionary War, began a family in the Nova Scotian wilderness, then returned to his African homeland to help found a settlement for freed slaves in Sierra Leone. He spent decades battling European and African slave traders along the coast and urging his people to stop selling their own into foreign bondage. This in-depth biography—based in part on Kizell's own writings—illuminates the links between South Carolina and West Africa during the Atlantic slave trade's peak decades.

Seized in an attack on his uncle's village, Kizell was thrown into the brutal world of chattel slavery at age thirteen and transported to Charleston, South Carolina. When Charleston fell to the British in 1780, Kizell joined them and was with the Loyalist force defeated in the pivotal battle of Kings Mountain. At the war's end, he was evacuated with other American Loyalists to Nova Scotia. In 1792 he joined a pilgrimage of nearly twelve hundred former slaves to the new British settlement for free blacks in Sierra Leone.

Among the most prominent Africans in the antislavery movement of his time, Kizell believed that all people of African descent in America would, if given a way, return to Africa as he had. Back in his native land, he bravely confronted the forces that had led to his enslavement. Late in life he played a controversial role—freshly interpreted in this book—in the settlement of American blacks in what became Liberia.

Kizell's remarkable story provides insight to the cultural and spiritual milieu from which West Africans were wrenched before being forced into slavery. Lowther sheds light on African complicity in the slave trade and examines how it may have contributed to Sierra Leone's latter-day struggles as an independent state. A foreword by Joseph Opala, a noted researcher on the "Gullah Connection" between Sierra Leone and coastal South Carolina and Georgia, highlights Kizell's continuing legacy on both sides of the Atlantic.


Kevin G. Lowther served as a Peace Corps teacher in Sierra Leone from 1963 to 1965. In 1971 he helped found Africare, a humanitarian organization supporting development and relief programs throughout Africa. He later managed Africare's work in Southern Africa for nearly thirty years. A former newspaper editor, Lowther has written on African issues for the Washington Post, Christian Science Monitor, and other publications. Coauthor of Keeping Kennedy's Promise: The Peace Corps' Moment of Truth, Lowther lives in Springfield, Virginia.

"One of Lowther's biggest contributions is his discussion of African complicity in the trans-Atlantic slave trade. Told in the religious and cultural context of African communities, Lowther relates how Kizell took unprecedented action against slavery from within, approaching local leaders to dissuade them from selling and trading fellow human beings. In learning about the life of Kizell, readers will find their understanding of the past broadened, deepened and challenged."—Charleston (S.C.) Post and Courier

"Lowther recounts Kizell's remarkable story from his childhood in Africa, capture, and enslavement, through joining the British following the surrender of Charleston in the American Revolution, to his resettlement in Nova Scotia and eventual return to his native West Africa. . . . The result is a dramatic piece of Atlantic history told from an African perspective, a rarity in the historiography."—Choice

"In a beautifully written and deeply researched book, Kevin Lowther has restored John Kizell to the pantheon of enslaved blacks who, during the War of Independence, sided with the British forces who emancipated them rather than with the American colonists who would not. This is an invaluable chronicle of the life and times of a man who continued to fight against the slave trade even after his return to Africa."—Walter C. Carrington, former U.S. ambassador to Nigeria and Senegal and former Peace Corps director in Sierra Leone