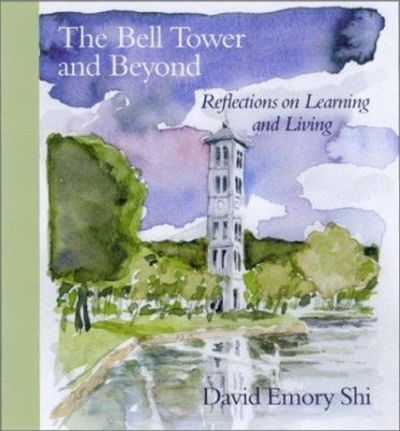 The Bell Tower and Beyond

Reflections on Learning and Living

When David Emory Shi, a leading historian and writer, left the classrooms of Davidson College for the president's office of Furman University in 1994, he took with him his interest in the past, in people, and in the process of becoming educated. Determined to elude the academic ivory tower and the swamp of administration, Shi continued his study of the connections between past and present, self and society. He also became a popular speaker on topics of public interest as well as a newspaper columnist and radio commentator with a loyal following throughout the country. Shi's miscellany of speeches and columns, collected in this volume, display both his desire to link academe to the real world and his infectious enthusiasm for liberal learning.

Shi's meditations reflect his ever-widening circle of interests—from Martin Luther King Jr., the Marquis de Lafayette, and the artist Cecilia Beaux to Transcendentalism and nineteenth-century reform. Shi offers innovative interpretations on topics ranging from the fate of books in the digital age and America's conflicted fascination with the simple life to George Washington's rules for civility and the Montgomery bus boycott.

Published as part of Furman University's 175th anniversary celebration, The Bell Tower and Beyond features tributes to distinguished Furman alumni, celebrations of university traditions, and black-and-white drawings by North Carolina architect and Furman alumnus Ronald Boozer that were prepared especially for this volume. The Bell Tower and Beyond also includes selections on Greenville and its citizens, the south, America's past, and contemporary culture.


David Emory Shi is president of Furman University in Greenville, South Carolina. The former Frontis W. Johnston Professor of History at Davidson College, Shi is the author of several books, including The Simple Life: Plain Living and High Thinking in American Culture. He is also co-author with George B. Tindall of the popular textbook America: A Narrative History. Shi publishes columns in the Christian Science Monitor, The Greenville News, The Charlotte Observer, The Atlanta Journal-Constitution, The Philadelphia Inquirer, and other newspapers. His columns are also heard on South Carolina Educational Radio. Shi lives in Greenville.

Ronald Boozer is an architect and artist who works in charcoal, ink and watercolors. After graduating in 1972 with a B.A. in visual arts from Furman University, where he was a classmate of David Shi, Boozer earned a M.Arch. from Clemson University. He is a principal with Odell Associates, an architecture firm in Charlotte, North Carolina. Boozer lives in Charlotte.