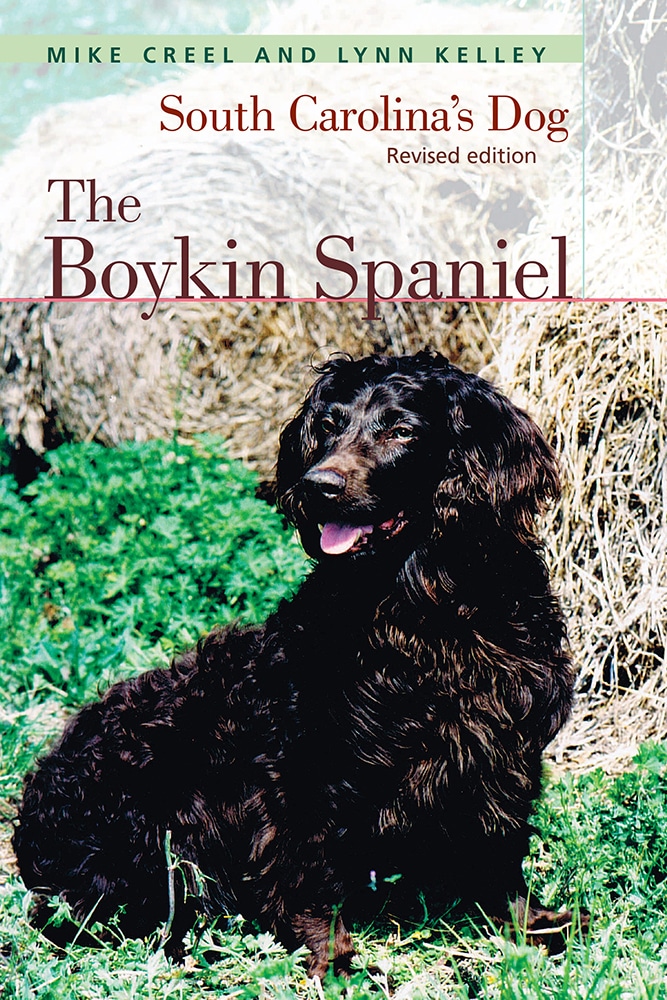 Since the origin of the breed in the early twentieth-century, the Boykin spaniel has proven to be a crackerjack retriever, remarkable trick artist, and a family favorite. This revised edition of The Boykin Spaniel: South Carolina's Dog by breed enthusiasts Mike Creel and Lynn Kelley is written for all lovers of the Palmetto State's famous little brown sporting dog and chronicles the breed's history, profiles the dog's distinctive personality, describes its sterling abilities, and records the fond memories of a distinguished cast of trainers and owners.

A gregarious creature with an uncanny ability to switch freely from playful family pet to disciplined hunting dog, the Boykin spaniel was named the state dog of South Carolina in 1985. By 2000 more than sixteen thousand Boykins from forty-nine states and numerous foreign countries had been registered with the Boykin Spaniel Society, based in Camden, South Carolina. Creel and Kelley offer an unparalleled resource for breed owners and devotees as well as a celebration of this home-grown hunter and companion, truly a dog for all seasons. Their heavily illustrated revised and updated edition also includes the breed standard, lists of award-winning dogs and owners, and a comprehensive bibliography of the breed.

South Carolina native Mike Creel is a retired public affairs specialist for the state's Department of Natural Resources and a longtime writer and photographer for South Carolina Wildlife magazine. Creel is a graduate of the University of South Carolina School of Journalism and recipient of the 1997 Harry R. E. Hampton "Woods and Waters" Conservation Memorial Award for journalism given by the South Carolina Wildlife Federation. He is a self-taught authority on native plant propagation and discovered a new native azalea species in 1999.

Lynn Kelley was a professor of political science in Missouri and a dean at three different institutions of higher education in Kentucky and Pennsylvania before moving to South Carolina in 1991. He served as a division associate director with the state's Commission on Higher Education until his retirement in 2009, when he was presented with the State of South Carolina's Order of the Silver Crescent for his distinguished service. Kelley is also the author of a children's book, The First Boykin Spaniels: The Story of Dumpy and Singo.

"This book is loaded with photos, amusing anecdotes, results of retriever trials and hunt tests, and tons of other information. Hunting enthusiasts, no matter what breed they own, will enjoy reading it."—Augusta (Ga.) Chronicle

"Boykin spaniel owners will have to have a copy of this. Reading and rereading it will give them hours of pleasure. But more importantly, it will arm them with facts about the breed to lord over the owners of less capable hunting dogs."—Lexington (S.C.) Chronicle

"A comprehensive source of information about the breed, which traces its beginnings to the early part of the twentieth-century."—Columbia (S.C.) State

"In 1985 when I signed into law the act making the Boykin Spaniel our state dog in South Carolina it was because of the fierce dedication, stalwart loyalty, noble character, and eagerness for both hard work and lively play exemplified by this native breed—characteristics I continue to enjoy in my 'granddogs' Sara and Pal. These are traits we appreciate in the Palmetto State and would do well to emulate more often in our daily lives. Authors Mike Creel and Lynn Kelley expertly tell the story of the Boykin as well as the stories and recollections of the owners, trainers, and breeders who have made South Carolina's dog increasingly popular around the world. The Boykin Spaniel is a book well worth retrieving."—The Honorable Richard W. Riley, former U.S. secretary of education and former South Carolina governor

"Creel and Kelley have given us an absolutely fantastic compilation of well researched information about the Boykin spaniel, from its history and lore to practical matters of breeding, training, feeding, and care. In addition the volume also includes entertaining anecdotes about Boykins as sporting dogs and family pets as well as many wonderful photographs through the generations. Only devoted owners of this little brown dog could have crafted such a masterpiece. This is a must-have reference for every Boykin spaniel owner's bookshelf and is essential reading for anyone considering getting a Boykin."—Kitty Beard, cofounder and past president, Boykin Spaniel Society