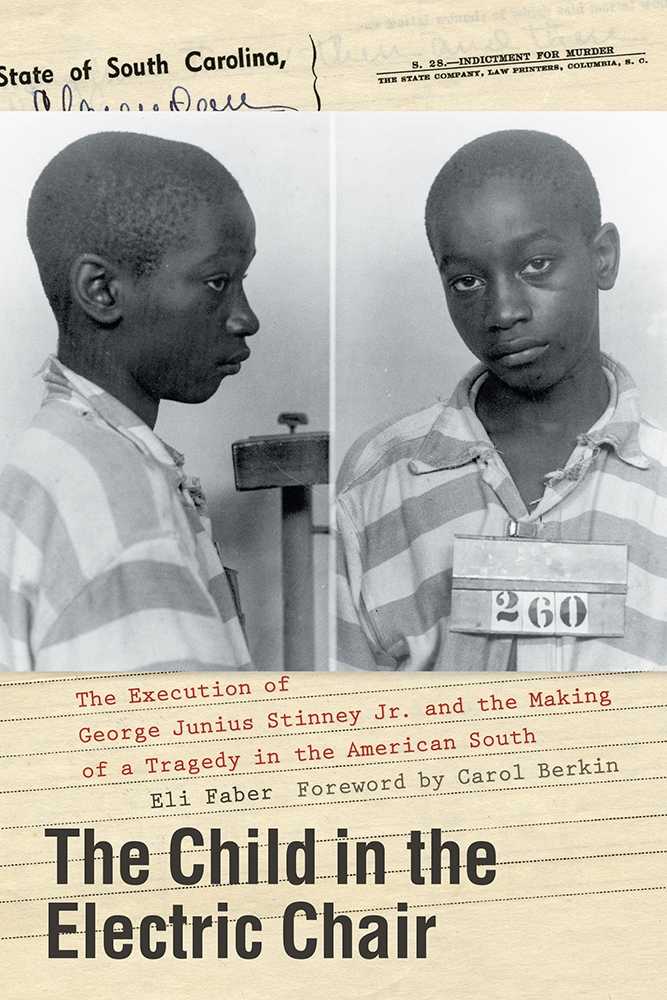 The Child in the Electric Chair

The Execution of George Junius Stinney Jr. and the Making of a Tragedy in the American South

The tragic story of the killing of 14-year-old George Junius Stinney Jr., the youngest person executed in the United States during the twentieth century

At 7:30 a.m. on June 16, 1944, George Junius Stinney Jr. was escorted by four guards to the death chamber. Wearing socks but no shoes, the 14-year-old Black boy walked with his Bible tucked under his arm. The guards strapped his slight, five-foot-one-inch frame into the electric chair. His small size made it difficult to affix the electrode to his right leg and the face mask, which was clearly too large, fell to the floor when the executioner flipped the switch. That day, George Stinney became, and today remains, the youngest person executed in the United States during the twentieth century.

How was it possible, even in Jim Crow South Carolina, for a child to be convicted, sentenced to death, and executed based on circumstantial evidence in a trial that lasted only a few hours? Through extensive archival research and interviews with Stinney's contemporaries—men and women alive today who still carry distinctive memories of the events that rocked the small town of Alcolu and the entire state—Eli Faber pieces together the chain of events that led to this tragic injustice.

The first book to fully explore the events leading to Stinney's death, The Child in the Electric Chair offers a compelling narrative with a meticulously researched analysis of the world in which Stinney lived—the era of lynching, segregation, and racist assumptions about Black Americans. Faber explains how a systemically racist system, paired with the personal ambitions of powerful individuals, turned a blind eye to human decency and one of the basic tenets of the American legal system that individuals are innocent until proven guilty.

As society continues to grapple with the legacies of racial injustice, the story of George Stinney remains one that can teach us lessons about our collective past and present. By ably placing the Stinney case into a larger context, Faber reveals how this case is not just a travesty of justice locked in the era of the Jim Crow South but rather one that continues to resonate in our own time.

A foreword is provided by Carol Berkin, Presidential Professor of History Emerita at Baruch College at the City University of New York and author of several books including Civil War Wives: The Lives and Times of Angelina Grimke Weld, Varina Howell Davis, and Julia Dent Grant.


Eli Faber (1943–2020) was professor of history and dean of undergraduate studies at John Jay College of Criminal Justice at the City University of New York when he retired in 2010. He was the author of A Time for Planting: The First Migration, 1654–1820 and Jews, Slaves, and the Slave Trade: Setting the Record Straight.

"A compact, jolting account of the shameful execution of a 14-year-old Black boy in the Jim Crow South. . . . An unsettling yet important historical excavation and true-crime narrative."—Kirkus Reviews [starred review]

"a gripping, tirelessly researched account of this significant case, and a cautionary tale that still resonates today."—Booklist

"There are many death penalty books, but few area are as compelling and heart breaking as this one. The Child in the Electric Chair offers readers a vivid portrait of a southern, company town, a heinous crime, threats of lynching, a broken legal system, and the cruel execution of a child. The writing is wonderful, the story is heart- breaking, and no one will finish the book without being deeply moved."—Austin Sarat, Amherst College

"Culminating meticulous research, Faber has exposed how at every level 14-year old George Stinney, Jr. was egregiously deprived of due process. Charged with killing two preteen White girls, he suffered hideous treatment within Jim Crow justice."—William B. Gravely, author of They Stole Him Out of Jail: Willie Earle, South Carolina's Last Lynching Victim

"Eli Faber has written a moving narrative of young George Stinney's execution that illuminates a larger story of racial injustice and political malfeasance in the Jim Crow South. This is a meticulously researched history, told with great thoughtfulness and clarity."—Amy Louise Wood, author of Lynching and Spectacle: Witnessing Racial Violence in America, 1890-1940