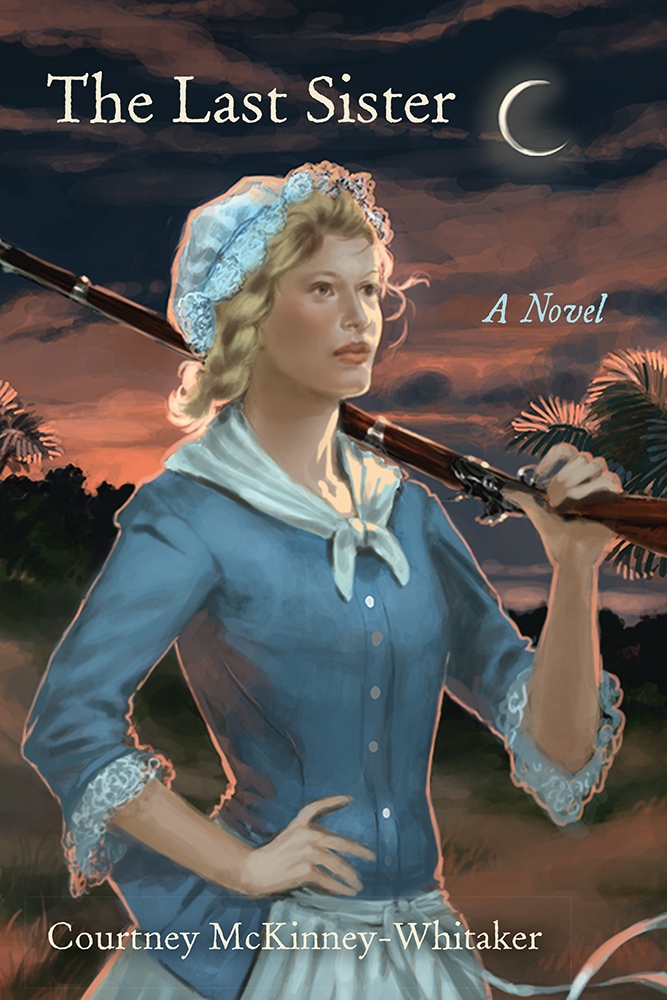 Set during the Anglo-Cherokee War (1758-1761), The Last Sister traces a young woman's journey through grief, vengeance, guilt, and love in the unpredictable world of the early American frontier. After a band of fellow settlers fakes a Cherokee raid to conceal the murder of her family, seventeen-year-old Catriona "Catie" Blair embarks on a quest to report the crime and bring the murderers to justice, while desperately seeking to regain her own sense of safety.

This journey leads Catie across rural South Carolina and through Cherokee territory—where she encounters wild animals, physical injury, privation, British and Cherokee leaders, and an unexpected romance with a young lieutenant from a Scottish Highland regiment—on her path to a new life as she strives to overcome personal tragedy.

The Anglo-Cherokee War erupted out of tensions between British American settlers and the Cherokee peoples, who had been allies during the early years of the French and Indian War. In 1759 South Carolina governor William Henry Lyttelton declared war on the Cherokee nation partly in retaliation for what he perceived as unprovoked attacks on backcountry settlements.

Catie's story challenges many common notions about early America. It also presents the Cherokee as a sovereign and powerful nation whose alliance was important to Britain and addresses the complex issues of race, class, and ethnicity that united and divided the British, the Cherokee, the Scottish highlanders, and the Scottish lowlanders, while it incorporates issues of power that led to increased violence toward women on the early American frontier.

"The novel is noteworthy for its setting, circumstances germane to Colonial American history yet little known. . . . A unique historical fiction title with a compelling plot and unique backdrop, taking place during a little-known skirmish in a pivotal time of American history."—School Library Journal

"The events of the Anglo-Cherokee War in 1759-60 in South Carolina are brought vividly to modern readers in a meticulously researched tale...Patient and sophisticated readers will find the story compelling and deeply moving and its heroine unforgettable."—Kirkus Reviews (starred)

"In The Last Sister Courtney McKinney-Whitaker has crafted a riveting account of life in backcountry South Carolina during the devastating Anglo-Cherokee War of 1759-60. This carefully researched book is so compelling that I read it in a single sitting. Catriona Blair courageously negotiates a perilous world where it is hard to know who is an enemy and who is a friend. Along the way, she finds love and crosses the threshold from childhood to adulthood."—Melissa Walker, George Dean Johnson, Jr., Professor of History, Converse College

"Courtney McKinney-Whitaker's first novel is a page turner. The introductory paragraph of The Last Sister pulls the reader into the world of an unknown, cold morning in 1759. The heroine, Catie, then divulges her own story of endurance in the backcountry of South Carolina. This seventeen-year-old literally fights to survive attacks of both men and beasts in the wilderness. Dealing with the strong emotions of grief and revenge, she never falters until she finally encounters her new life. This ordinary young woman stands up against all obstacles, and I cheered her on."—Sheila Ingle, author of Courageous Kate: A Daughter of the American Revolution

"The Last Sister is suspenseful and touching. Through the eyes of a teenage girl coming of age, readers gain an appreciation of the contentious dynamics in the Carolina Upcountry from the French and Indian War through the decades leading to the American Revolution. The tale of McKinney-Whitaker's strong, tenacious heroine will inspire young readers.Courtney Tollison Hartness, Furman University, author of World War II and Upcountry South Carolina"—